Gender… Why that Color?

I found myself one day in a baby store looking for a gift after the sister of a friend had just become a mother. In the middle of the store I suddenly stopped dead in my tracks when I realized that I couldn’t remember the sex of the newborn. My friend had told me over the phone, but I was embarrassed to call her and ask. The most important thing in the world at that moment became, “pink or blue?’. Even if I personally don’t care that much about gender color conventions I found myself chained by the social proprieties. After some searching, I found a neutral solution in a nice green bodysuit. They loved it. And by ‘they’, I mean the parents. It’s all about the parents. The baby doesn’t care about the color, but it will be raised to care a lot.

Apart from the obvious commercial drive to market baby products, gender color coding seems to reflect a conservative pink-blue worldview of clear and set-in-stone divides amongst the sexes. Before a little human is even born, and certainly before developing the ability to choose colors, it gets color coded. Researchers generally agree that this is a 20th Century phenomenon that reached its peak after World War II due to the explosion of manufacturing and product choices. As a reaction, parents of the rebellious 60s tried to break the pink/blue stereotypes with more ambiguous colors. When those kids became parents in the 80s they longed for the pink/blue cuteness they were deprived of by their parents and the divide was back.

Why Pink and Blue?

Those are fairly unambiguous colors and they sit on the opposite sides of the strong-delicate spectrum. But which shade sits where? It depends on the era and the culture. There’s a much quoted article in the US trade publication Earnshaw’s Infants’ Department from 1918 that said “pink, being a more decided and stronger color, is more suitable for the boy, while blue, which is more delicate and dainty, is prettier for the girl.” Such a practice was also common in Belgium in the 70s. In my elementary school in the 80s the gym class dress code was red shorts for boys and blue shorts for girls. But they flipped that in high school which contributed even more to my gender confusion. (My dad’s idea of cool was to have a son with shoulder length hair up until the age of 7. Pretty much everyone thought I was a girl.)

Even today, in an era that could be described as ‘everything goes’, and despite our awareness and resistance to assigning colors to the sexes, you still encounter the glaring pink-blue split in almost every kid’s store. Korean artist JeongMee Yoon explored the extremities of gender color coding in her ongoing Pink & Blue Project. Her photos are both cute and very unsettling. Children seem imprisoned by color. As she says, “The differences between girls’ objects and boys’ objects are also divided and affect their thinking and behavioral patterns. Many toys and books for girls are pink, purple, or red, and are related to make up, dress up, cooking, and domestic affairs. However, most toys and books for boys are made from the different shades of blue and ‘?’ are related to robots, industry, science, dinosaurs, etc.” Fortunately we have little visionaries like the little girl Riley who vented her frustration with pink stuff for girls in an amazingly grown-up and succinct manner. “Why do all the girls get to buy pink stuff and boys get to buy different color stuff?” Why, indeed. When you look at Lego’s or Disney’s selection of colors girls have purples and pinks and boys have pretty much everything else. But the situation will change as soon as they grow up. Adult men get muted colors of a rather limited palette, while women can choose from every color ever manufactured. Both approaches seem to perpetuate deep cultural and gender stereotypes. In the first case girls should learn their limited place from the day they were born. While in the second case we have colorful/feminine and muted/masculine split we discussed in ‘Culture… Why That Color?’

What happens when males position themselves on the pink side of the spectrum? We immediately assume that the male is signaling his sexual or gender identity, i.e., his homosexuality, with the well-known “logic” of ‘boys who like boys are basically girls’. Pink, in this case is a badge of shame in the color coding of socially undesirable boys or men. Nazi concentration camp badges included a pink triangle for gay men, while lesbians were lumped into an ‘asocial elements’ group with a black triangle. However, in the late 60s, with the articulation of the LGBT rights movement, the significance of pink began a shift from shame to pride. Even the infamous pink triangle was repurposed for the cause, as with Act Up’s Silence = Death initiative in the 80s. There’s a brilliant scene heavy with meaning in Tony Kushner’s play ‘Angels in America: A Gay Fantasia on National Themes’ (1993) where Belize, a flamboyant openly gay character, reprimands the more closeted and troubled, Louis, about the color of the sky: “Purple? Boy, what kind of a homosexual are you, anyway? That’s not purple, Mary, that color up there is mauve.” We might read it as ‘You’re gay, you should know your colors and where you stand.’

In recent times, the pink changed to purple (often lavender) which signaled a less radical and more inclusive approach of the LGBT rights movement. After all, purple covers everything between red (pink) and blue, and challenges fixed and extreme gender roles. We’re all a red/blue mix, just pick your ratio. This diversity is probably most visible in the widely accepted LGBT rainbow flag that includes, well everyone. Instead of only two labels– male or female– we now have many (see recent Facebook’s gender options), which is fine if you’re okay with gender labeling. Still we should be free from anyone assigning us a color. Pick your own, and feel free to change it as often as you like. 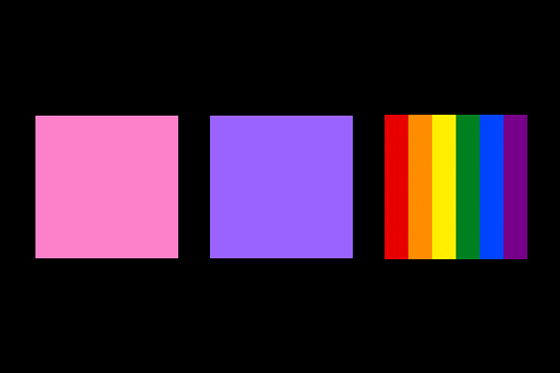