How the Munsell Book of Color Revolutionized Linguistics Part 3

First – why are modern day researchers using the Munsell chart (or similar charts) instead of the Holmgren wool test and the Lovibond tintometer?

When it comes to the tintometer, it is rather cumbersome to carry around for field linguists travelling around the world, though its modern day equivalents, the colorimeter, is a huge help in many other fields. A field linguist needs something portable and rather sturdy. The wools would certainly fit that description, but the coloring of the wool is not standardized. By following Holmgren’s instructions, one would indeed get a rainbow of different colors – but two different researchers might get slightly different shades of red or green, and it would be very difficult to compare the results, because slightly different stimuli would have been used. What the Munsell chart offered researchers was just that: comparability, and it led to a great revolution in both linguistics and anthropology.

In 1956, Lenneberg and Roberts published an article on how anthropologists might compare sensory descriptions in different languages. The general procedure would be to show the same set of stimulus materials to speakers of different languages and see if, and how, they differed in their responses. Color was an excellent choice for this kind of study, they suggested. By this point researchers knew that the physiological aspects of color vision seemed to be universal, and it was relatively easy to test, at least compared with, say words for pain or words for smells (interesting modern day research projects are investigating these domains at the moment). Lenneberg and Roberts decided to study color terms in English and Zuni, and chose the Munsell Book of Color (1942) to do so. There were several other color books available, but none were both as comprehensive, accessible, well tested (psychologically and psychophysically) and with detailed colorimetric information as what Munsell offered. The Munsell Book of Color mapped all color samples it offered onto the color solid, i.e. the three (hue-brightness-saturation) dimensional theoretical construct devised by Nickerson & Newhall (1943) to show all human visible colors. 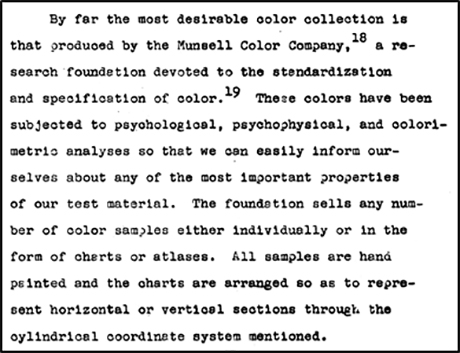 Quote from Lenneberg and Roberts 1956, page 43, detailing why they chose the Munsell Book of Color over other similar products on the market.

Lenneberg & Roberts might have been first to use the Munsell Book of Color, but the most famous example of color linguistics is the work by Berlin & Kay in 1969. They investigated how speakers of 20 languages described 329 color chips provided by the Munsell Company.  Berlin & Kay created an experiment kit composed of 320 color chips of forty equally spaced hues and eight degrees of brightness, all at maximum saturation, and nine chips of neutral hue (white, black and greys). Speakers were shown the colored slips of paper (pasted onto a neutral grey background) one by one, and asked to name them. The languages were Arabic (Lebanon), Hungarian (Hungary), Swahili (East Africa), Bulgarian (Bulgaria), Ibibo (Nigeria), Tagalog (Philippines), Catalan (Spain), Indonesian (Indonesia), Thai (Thailand), Cantonese (China) Japanese (Japan), Tzeltal (Southern Mexico), Mandarin (China), Korean (Korea), Urdu (India), English (US), Pomo (California), Vietnamese (Vietnam), Hebrew (Israel) and Spanish (Mexico). 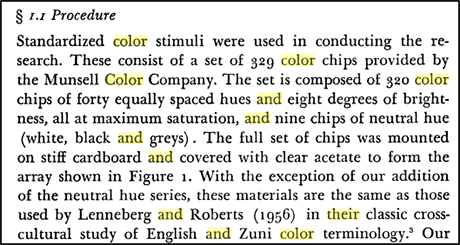 Their results were fascinating: “First, there exist universally for humans eleven basic perceptual color categories, which serve as the psychophysical referents of the eleven or fewer basic color terms in any language.” (page 104)

“Second, in the history of a given language, encoding of perceptual categories into basic color terms follows a fixed partial order.” (page 104) This echoes back to Rivers (1901) findings, but Berlin & Kay’s system was far more detailed. They suggested two variants of the universal order.

These orders mean, that if a language only has two color terms, it will divide the entire color spectrum into two chunks, one for all blacker and one for all whiter colors. If there is a third color term, the reddish part of the color spectrum will be given its very own term. If there are four color terms, languages have a choice: either they can first name the yellowish part of the spectrum, or the greenish – in the next (five color term) stage, whichever of the yellowish and greenish parts weren’t named before, will be given its own term. Then blue, then brown, will be named. After that, languages, in no particular order, will name the purple, pink, orange and grey parts of the spectrum.

The third general finding of Berlin & Kay was that “the overall temporal order is properly considered an evolutionary one; color lexicons with few terms tend to occur in association with relatively simple cultures and simple technologies, while color lexicons with many terms tend to occur in association with complex cultures and complex technologies (to the extent that complexity of culture and technology can be assessed objectively.)” (page 104)

Part 4 of the series takes a look at the World Color Survey and statistical data about language and color.

Gladstone WE. (1858). Studies on Homer and the Homeric age (3 vols). The University Press.