How the Munsell Book of Color Revolutionized Linguistics Part 2

There is only so much one can get out of reading old texts, if one is interested in the universality of something. At some point someone has to go outside and look.

W.H.R. Rivers (1901) travelled to Torres Strait and New Guinea in 1898 and undertook extensive study of the color vision and color naming of the people he met there. He visited, and examined, two tribes “inhabiting one the eastern and the other the western islands of Torres Strait”, and also people on the Kiwai island, at the mouth of the Fly River and in several different Australian tribes.

Rivers was interested in two things: what was the color terminology of the languages he encountered, and did the people all over the world have the same color vision. To investigate this he had two primary tools: Holmgren’s wool test and a Lovibond Tintometer, loaned to the expedition by the inventor, Mr. Lovibond, himself. Before we go into the findings of the expedition, we’ll digress and look a little deeper into these pre-Munsell anthropological tools for color research. 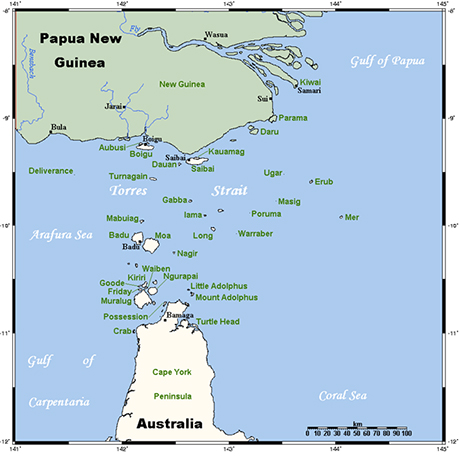 Frithiof Holmgren (1831-1897) was a Swedish physiologist who worked on standardizing detection of color-blindness. He built on work by Seebeck (1837) and by Wilson (1855), and his work became world famous when a train crashed in Lagerlunda, Sweden, in 1876. Holmgren suspected that this was due to train personnel being colorblind and not interpreting the green and red warning lamps correctly. Using the test he had devised, he examined 266 employees of the train company and found thirteen people with color blindness to some degree, thus hopefully safe guarding against future tragic accidents of the same kind. The test itself utilized over 160 pieces of Berlin worsted yarn, colored in all the shades of the rainbow. (The University of Toronto Scientific Instrument Collection, accessed 20140811)

I have been unable to find the original Holmgren article from 1874, but large sections of it is reprinted in its entirety in Joy (1880). This quote from Holmgren shows how the yarn test was constructed. 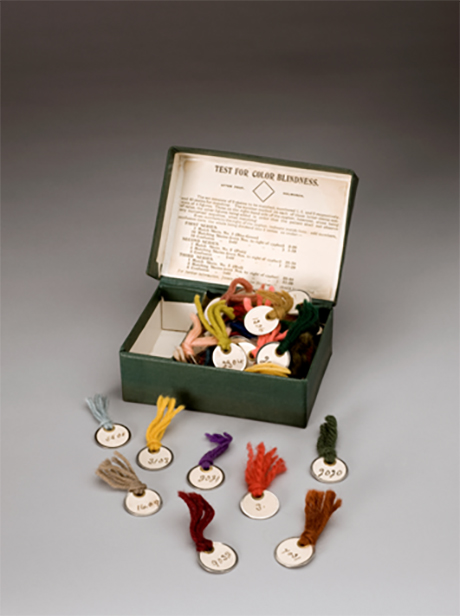 “A selection of Berlin worsted is then made, including red, orange, yellow, yellow green, pure green, blue green, blue, violet, purple, pink, brown, gray, several shades of each color, and at least five gradations of each tint, from the deepest to the lightest. Green and gray, several kinds each of pink, blue, and violet, and the pale-gray shades of brown, yellow, red, and pink, must especially be well represented, The choice of the material does not belong specially to our method. In fact, Seebeck suggested the use of Berlin worsted, which was employed by his advice, and still is at present.”

Rivers was thus not the only one to use the Holmgren test: it was used all over the world. But he may have been one of the first to use it to investigate color vocabularies, and not just colorblindness.

Rivers also brought along a tintometer that he had borrowed from Joseph W. Lovibond. Lovibond was a Brewer from Salisbury, England, who wanted to find a way to control the quality of beer. One could, presumably, sample each batch, but Lovibond was interested in a more neutral way of finding out whether a beer batch was up to spiff. Color is one way of checking this, and after two decades of experimentation he had come up with a tintometer which could quantify the color of the beer. The tintometer did this by combining three glass disks, colored into different intensities of magenta, yellow and cyan, until the color that appeared when three disks were layered onto each other exactly matched the color of the beer sample. The ID numbers of the three disks were noted and the color could be precisely described. For modern readers who have ever worked with RGB or CMYK-values, the process should be very familiar. The tintometer was used not only by brewers but also by chemists, dyers, sugar refineries and flour mills (Smithsonian, National museum of American History: Lovibond Tintometer.) 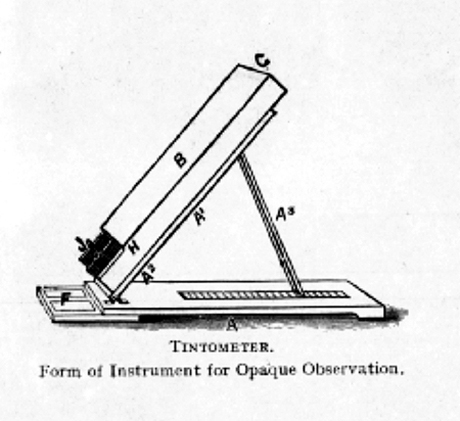 Rivers (1901, p.51) described the tintometer: “When the native looked into this apparatus he saw two square patches of light, either of which could be colored in any intensity of red, yellow or blue by means of a delicately-graded series of glasses of those colors. The ‘threshold’ for each color was then determined by finding the most faintly colored glass which the native could recognize and name correctly.”

Using the Holmgren test and the tintometer, Rivers found that the languages of the tribes he visited showed different stages in the evolution of color terminology. Some tribes only had three definite, recurring and generally agreed upon color words in their vocabulary, and in this case the three terms were always “dark” (used for all dark colors, regardless of hue), “bright” (used for all light colors) and “red” (used for reddish hues). He believed that these different stages of color term development also corresponded to their “general intellectual and cultural development”.

Rivers proposed that “Indeed, one might almost go so far as to say that Homer’s terminology for color is in a stage of development which is on much the same level as that of Kiwai, and distinctly less developed than those of Murray Island and Mabuiag.” From the “almost go as far as” remark, it is evident that this was a sensitive statement: to compare the great western sage Homer’s vocabulary to that of illiterate people!

As for color sense, as opposed to color vision, Rivers believed that the people he examined were physiologically different from Europeans in one sense – he believed that they could not distinguish blue in the same way (Rivers 1901, p.52). He theorized that this was a racial characteristic: “[…] in dark races, blue and green would be more strongly absorbed, and consequently there would be a certain degree of insensitiveness to these colors, as compared with red and yellow.”

We now think that Rivers was wrong – there is little discernible physiological difference between humans of different ethnicities when it comes to distinguishing color. And we also think that the four stages he described in color terminology evolution are too simplistic – but to realize that, researchers needed better tools and far more subjects than Rivers had access to. And that brings us to the Munsell chart.

Part 3 of the series examines how the Munsell system came to be used in the modern day and its historical use in the study of color linguistics.