Imposter! The Windows of the Old Colorado State Museum

Armed with a blank window survey and various documentation tools, I set out to record the condition of the 100 windows at the old Colorado State Museum for our latest window restoration project. Our firm, Humphries Poli Architects (HPA) was retained to prepare documents for the restoration of the windows, including returning operability, and the addition of new storm windows. Completed in 1910 by Architect Frank E. Edbrooke, the structure currently houses the offices and meeting rooms for the Colorado State Legislature.

Edbrooke moved to Denver from Chicago in 1879 and quickly became one of Colorado’s most notable architects. In 1895 he was retained to supervise the completion of the Colorado State Capitol building. The Capitol’s original architect, Elijah E. Myers, had been dismissed nearly 6 years before while construction was already underway. Progress continued without an architect until Edbrooke was appointed. He can be credited with developing the final design of the Capitol Dome and was the biggest proponent for its gold gilding (which was just recently restored). The Capitol was completed in 1908 and Edbrooke’s involvement would have made him the front runner for a project just across the street to the south.

The Colorado State Museum is a four-story, Italianate style building, constructed of white Colorado Yule marble on top of a gray granite base. The building is a contributing structure to the Denver Civic Center Historic District, which was listed on the National Register of Historic Places (NRHP) in October of 2012. The windows of the building are some of the largest HPA has worked on. The Museum’s first floor windows, the biggest in the building, are 6’-8” wide by 12’-8” high. 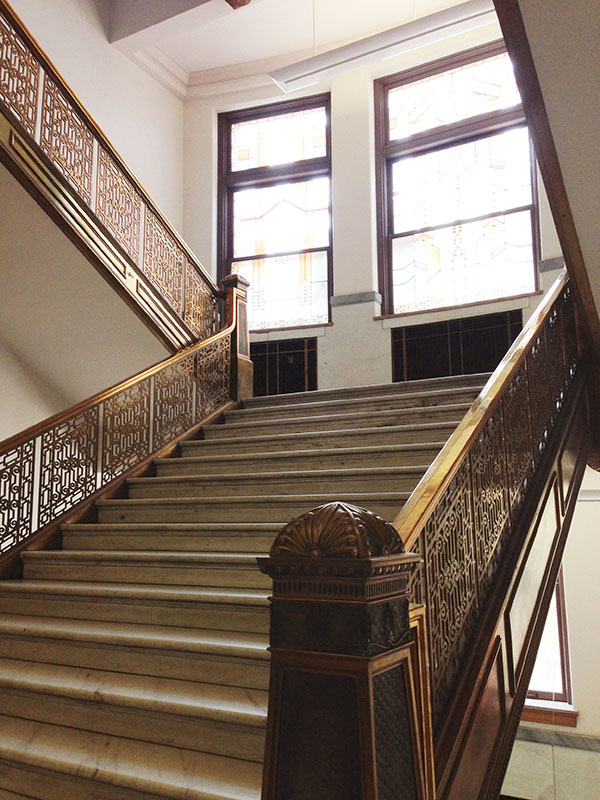 The grand staircase with three light window. The first floor windows are all single-lite double-hung with fixed transom panels above. The three windows in the grand staircase have stained glass panels, an installation as part of Colorado’s Public Art program. The panels will be reinstalled following restoration of the sashes and frame.

When the window restoration project began, everyone was under the assumption that these 105 year old windows were wood. The NRHP nomination form itself states, “Windows of the building are wood frame one-over-one light…” However, as I began my fieldwork on a sunny December day, I quickly realized the windows were cold and in surprisingly good condition for their alleged age. I noticed some rust marks at meeting rails and the bottom corners of the sills outside confirming they were steel. Suddenly I found myself asking if they’d been replaced at some point. Unlike what one typically thinks of when picturing a steel window, these windows and frames were designed and detailed to be wood imposters! Further forensic research proved just that.

Our team delved into archival research. Fortunately the original building drawings are located in the State Archives and we were able to locate an old blueprint that noted, “Metal sash and trim.” 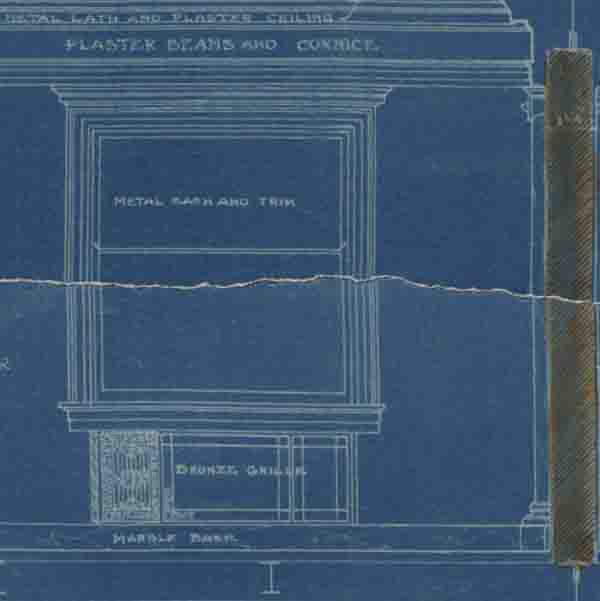 Knowing the windows were original to the building was of great relief. There was a period where we were concerned our “Window Restoration” project may be derailed and we would have to regroup and consider the next steps. 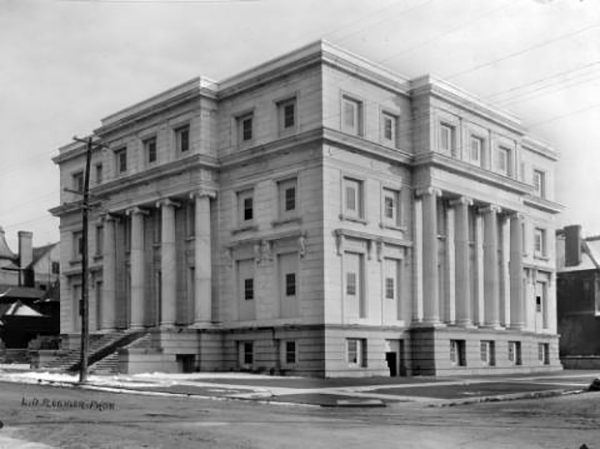 One of the images discovered during our research was a construction photo showing the temporary enclosures with small windows in the openings. Although a manufacturer of the windows has not been determined, research did validate that there was not a steel window company nearby; therefore there is a high likelihood that the windows came from the Midwest or East Coast. Photo Credit: Denver Public Library, Western History Collection

With more fieldwork a few locations were discovered where the most recent paint coating was chipped off. These small openings revealed a faux wood grain scheme – more evidence that the windows were carefully detailed by Edbrooke to appear to be wood.

Wanting to get a sense of the graining and determine the historic colors of the windows, HPA requested the help of Built Environment Evolution (B.E.E.). Natalie Feinberg Lopez, an architectural conservator, took paint samples at various locations and on multiple windows throughout the building for comparison. The Client also opted to open a paint exposure window to document the grain pattern. 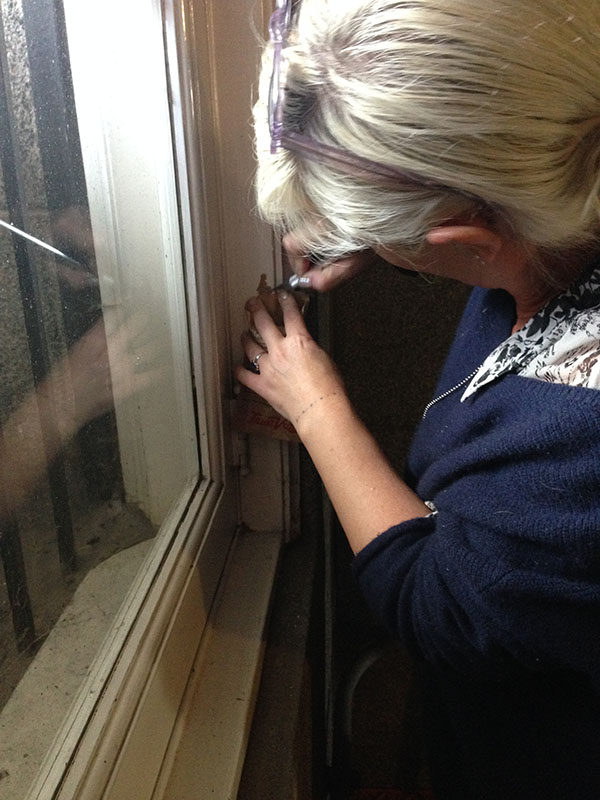 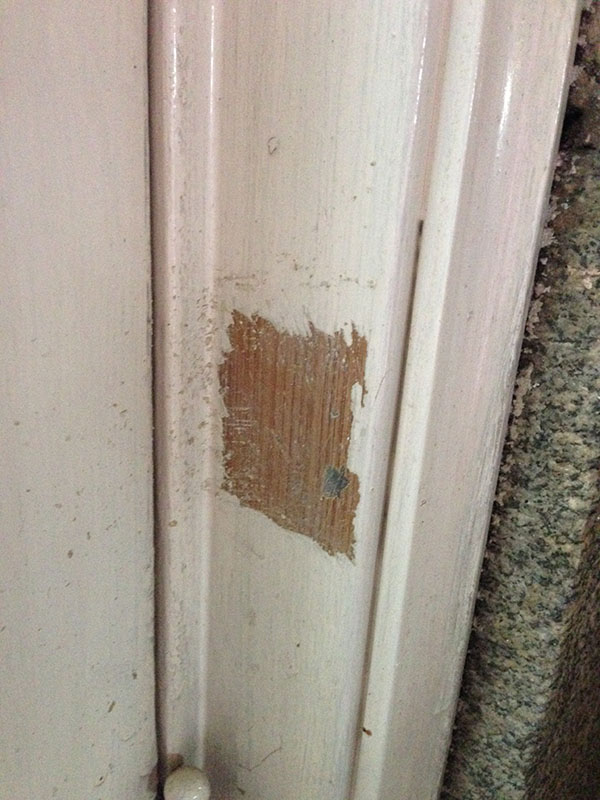 Paint sampling of the windows and a nearby door frame confirmed that the windows were painted to match the wood doors, trim, base boards and other moldings throughout the building. One can imagine the time an expert faux-painter spent in this building completing the work. 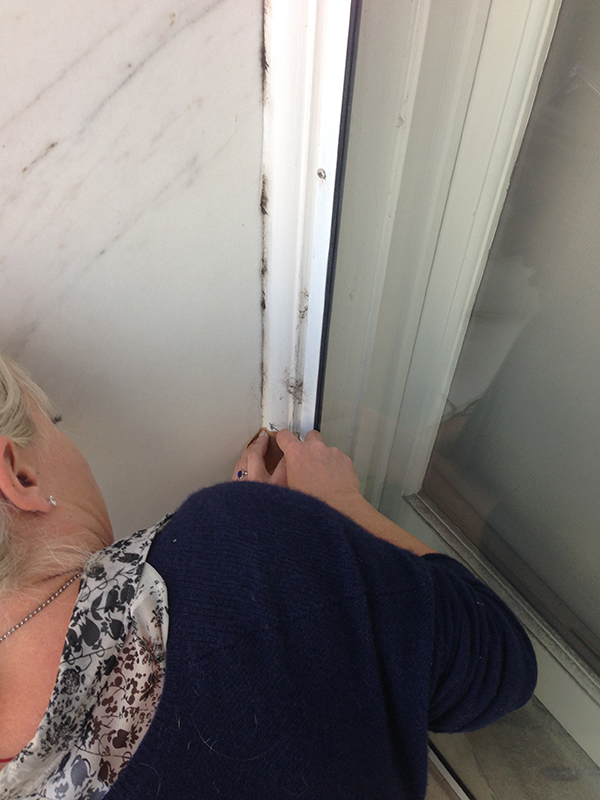 B.E.E. utilized the Munsell Color System to find the color match from the paint sampling to determine the Historic color scheme. 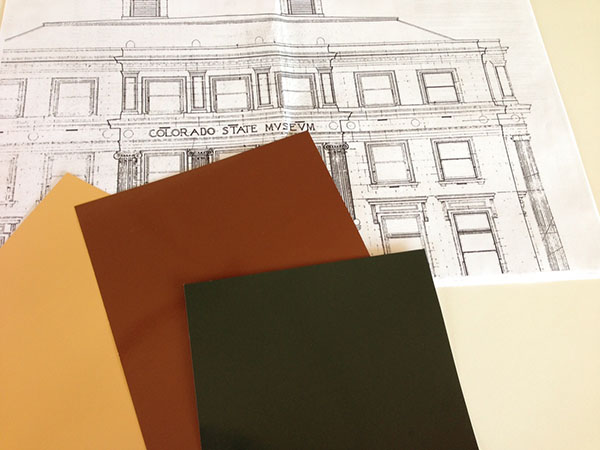 HPA then obtained the color sheets, a portion of which went to the General Contractor so they can prepare paint draw downs for our review. HPA will retain the remainder of the color sheet for comparison to reach an approved color match. In our experience this series of steps ensures the most accurate color restoration.

For the Colorado State Museum Window Restoration the project will be phased. The initial phase will include the window restoration of all 100 windows and the installation of new exterior storm windows. The frames of the storm window will be color matched to the exterior of the restored windows. 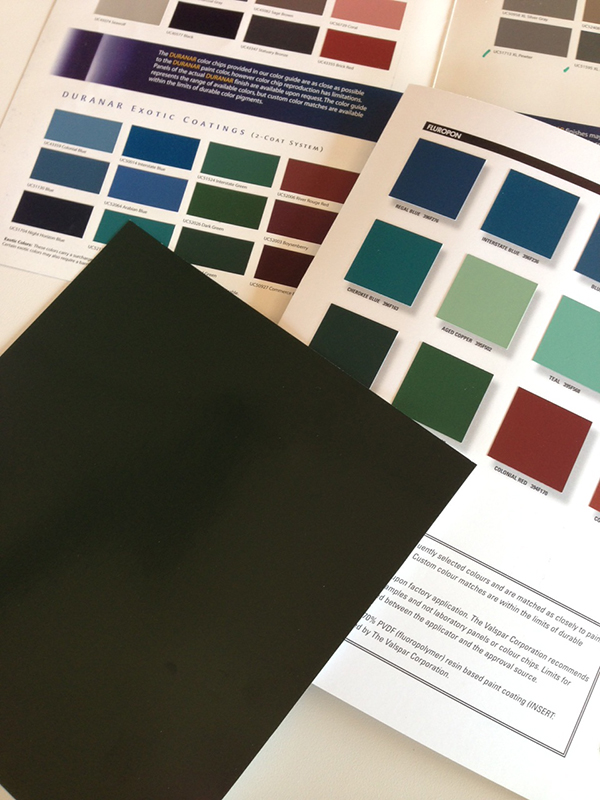 One will notice from the paint sampling photographs, there was a campaign in the mid-90’s where the windows were all repainted white. Looking at the historic photographs of the building, the dark green of the original windows was a wonderful contrast against the white marble exterior of the building. When the project is complete the original drama of the windows will be restored! 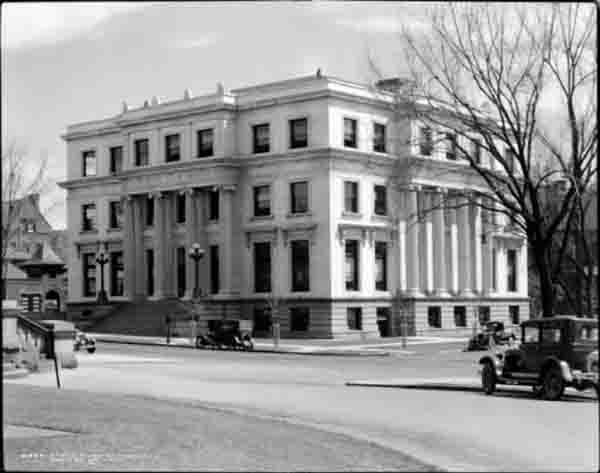 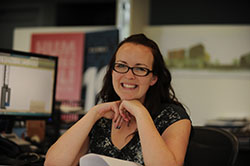 Natalie Lord is a preservation architect at Humphries Poli Architects in Denver, Colorado. She completed her Bachelor of Architecture from the NewSchool of Architecture and Design in San Diego and her Master of Arts in Historic Preservation Planning from Cornell University in Ithaca. Her work is inspired by the desire to bring new and long-lasting life to communities by continuing the legacy of great buildings.