The History of Lincoln’s Train Car

When Abraham Lincoln’s private train car was completed in 1865 at Alexandria Virginia in the “government shed” of the Orange and Alexandria Railroad, there were no color photographs, no lithographs, and no contemporary paintings made of the president’s car. Even though over thirty black and white photographs of the car exist over its lifetime, the question of color comes down to verbal descriptions.  Most of the black and white images have been copied multiple times and several clearly have been “adjusted” in the dark room.

There are multiple accounts in history that comment on the appearance of the exterior of Lincoln’s car.

An excerpt from The Canajoharie Radii & Farmer’s Journal mentions the exterior of the car from along its route:

“The exterior of the car was of a rich chocolate color, and had on the center paneling a painting of an American eagle, and was draped with curtains of black cloth, fringed with silver. The curtains were festooned with heavy silver cord, and tassels, supported by silver eagles.” (1865)

“The color of the car is dark claret, beautifully polished” (1865)

An additional note by a journal editor states:

“This car has been used on that road as an outfit car and at present is in very dilapidated condition “from Union Pacific Superintendent of Motive power J.H. McConnell.”

At this time the exterior paint was badly damaged.

There are two builders’ photos of the car, but the best is by Andrew J. Russell (Russell’s Civil War Photographs Dover Publication NY 1982 plates 39 and 62). 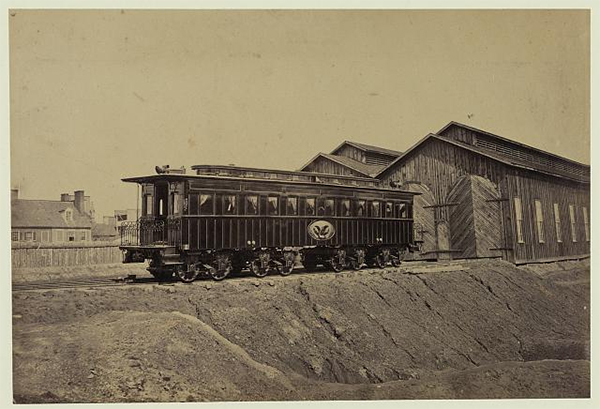 One of the actual car builders’ family has a very early and clear print of plate 62. The filigree is clearly visible, but there is no variation in tone to be seen from the side panels to the window frame. This uniformity of color is especially clear at the corner of the car and under the roof end in shadow. There is a difference in tone for the entire top and clearstory, but again the windows, insets, frames, panels and sides appear to me to be monochromatic. There are some picture that exist of the train enroute, the clearest being the photos at Harrisburg and Buffalo NY.

However, neither suggests a variation in tone on the sides of the car or clearstory.

After Union Pacific’s possession of the train car, it was sold to Colorado Central in 1874. Carrie Strayhorn, in her book Fifteen Thousand Miles by Stage, states that the outside of the car was painted a bright yellow around 1877 (twelve years after the car was built). Almost twenty years later in Omaha, Nebraska, the car was taken to the Union Pacific shop where it was said to be restored to the original condition as when President Lincoln occupied it. The car was returned to Union Pacific and around 1892, an “old railroader” removed a window in Platte Nebraska and eventually gave it to a family member.

Putting the Color Pieces Together

After the train car was returned to Union Pacific, any existing photographs show all the small clearstory windows removed or covered with a long metal strip. After that, the car passed through several hands and eventually burned in a fire in Columbia Heights, Minnesota in 1911. Several fire damaged exterior parts have been found, however the fire damage makes color identification nearly impossible. A piece of window trim in fairly good condition was sent my way for color analysis.

The wooden trim piece that was sent was about the size of a pencil, roughly 6 inches long. The material was analyzed using a digital camera and inspection microscope. The “back” of the piece (against the glass) seemed to have little to no weathering. 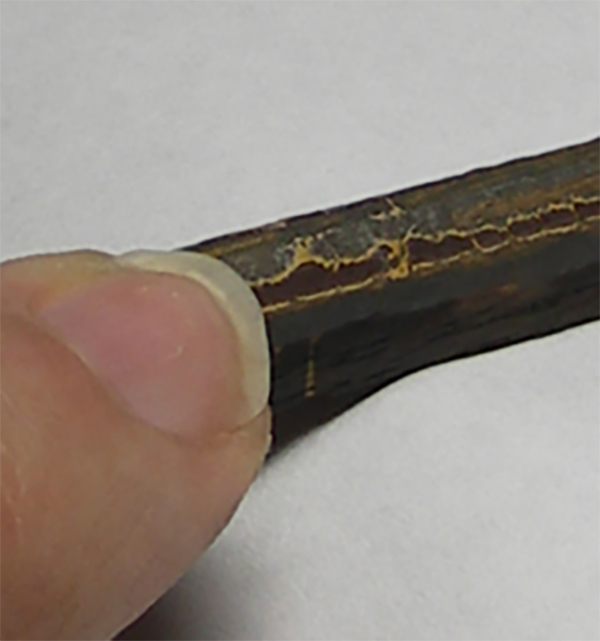 The question was, “Who painted the maroon layer on top? Union Pacific?” 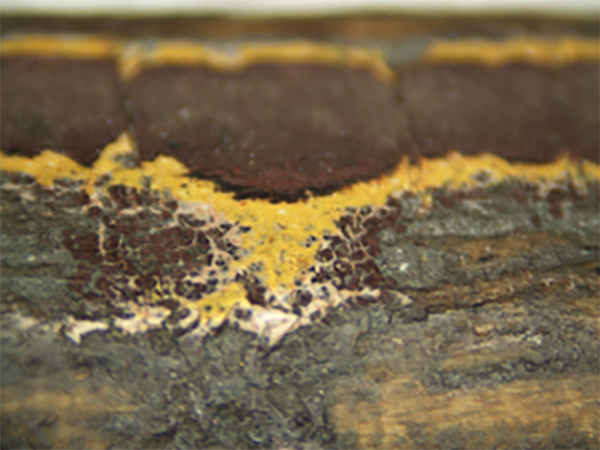 An examination of window trim from Lincoln’s funeral train car using an inspection microscope. You can see the inside of the trim piece has a top layer of a maroon color and some yellow edging in.

On an overcast day at noon, the top maroon paint layer and yellow paint layer were compared to Pantone color charts at the University of Arizona Print lab. Under magnification, the Pantone charts appear as printed dots of primary colors so the sample was taken to the Arizona State Museum Conservatory Laboratory for a comparison with Munsell color charts. 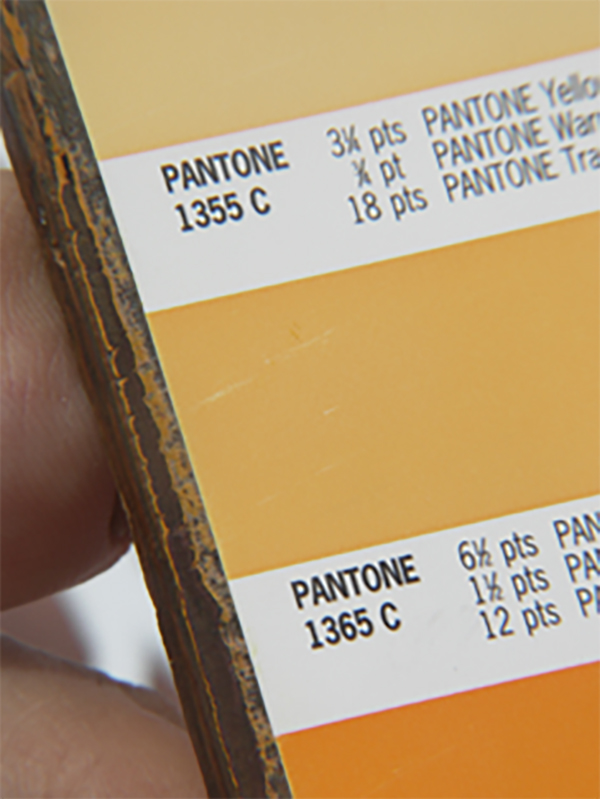 The “bright yellow” that was described by Carrie Strayhorn, seems to visually match Pantone 1365 C.

Tiny chips were removed and deposited on the color samples. The color matches were done using the Munsell system. 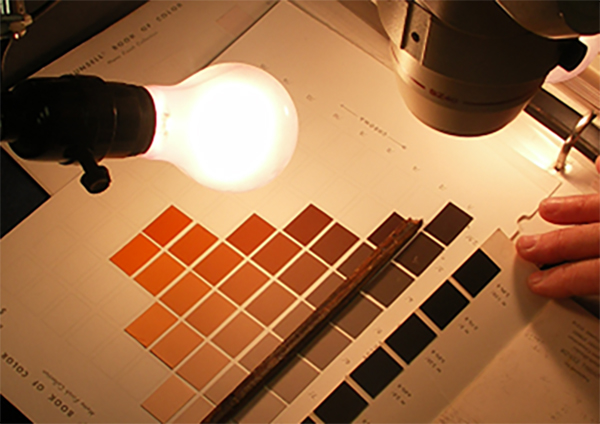 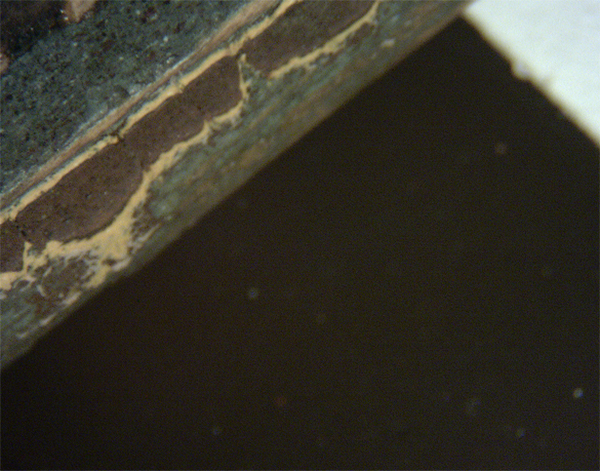 Chips have been scraped off onto the Munsell sample 10R/2.5/2; they just disappear as a matching color.

The studies showed the train car was originally a very dark maroon.  With aging, I would expect the color to fade not darken. The portion of the trim tested was covered with three layers of paint for 150 years and the back edge was never exposed to the weather.

Additional work should include an analysis of the oldest layer of paint to verify its 1863 chemical origins as “flaming cars” was a technique used to remove all the paint for repainting.

A replica of the train car is scheduled for completion in May 2015. It will serve as a key component of a re-enactment of the Abraham Lincoln funeral.

Here are the colors in action at the 150th anniversary re-enactment in Springfield May 3rd, 2015. 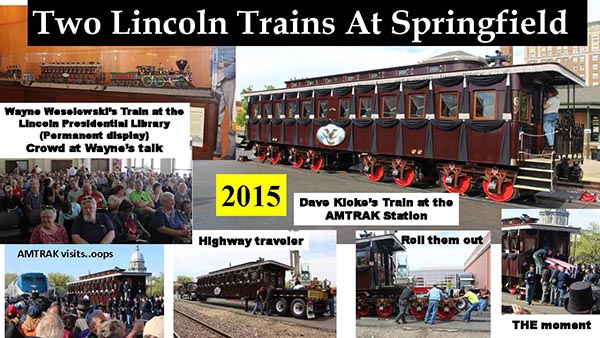 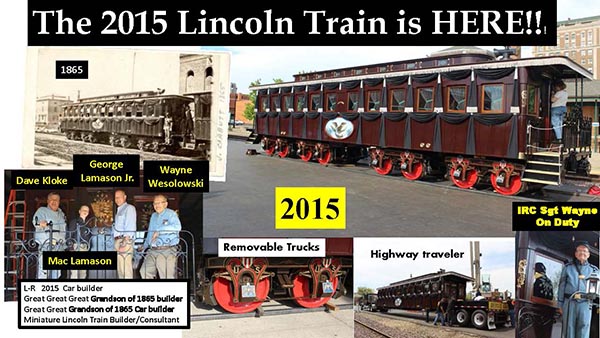 Wayne Wesolowski is a builder of miniatures that have been exhibited at the Chicago of Museum of Science and Industry, West Chicago City Museum, RailAmerican, the Gerald Ford and Abraham Lincoln Presidential Libraries and Museums and the National Railroad Museum, among many others. He worked as the technical consultant on The 2015 Abraham Lincoln funeral train project. With his wife Mary Cay, they have written several books and numerous articles on model building. He recently retired from a 41 year teaching  career in chemistry at the University of Arizona and Benedictine University.