Time for a Munsell Revival

As the The Boston Globe article, “Munsell, the man who colored America,”* by Dushko Petrovich (March 17, 2013) suggests, perhaps it’s time for a Munsell revival. Although Albert H. Munsell was an award-winning artist, he was the consummate educator, who developed many of his color education tools during his 25-year tenure at Massachusetts Normal Art School (today’s Massachusetts College of Art and Design or “MassArt in Boston).

Munsell’s focus was on teaching a systematic approach to classify color that, when understood, would eliminate color anarchy, yet allow for unlimited color possibilities. That’s why Munsell used music education as an example of how to teach color. He likened the pitch, intensity and duration attributes of sound to his three dimensions of color—hue, value and chroma. Hue is the color itself such as red, yellow, green, etc.; value is the lightness or darkness; and chroma is the saturation or brilliance of a color.

Munsell’s color order system is extensible.  It was designed to allow for infinite color possibilities, all of which can be classified within the Munsell system of color. How these colors are deployed… well, that’s a “horse of a different color.” A tool is only as good as the person using it. Yes, perhaps it is time for a Munsell revival, beginning with the basics.

Let the Color Wheel be Your Guide

Munsell based his color order system on the color wheel, a tool Sir Isaac Newton developed in the 1600’s, and is still used today by artists, designers and creative teams for palette development.

The color wheel was rooted in Sir Isaac Newton’s scientific experiments with prisms which revealed the visible spectrum of light or the popular, “ROY G BIV” (red, orange, yellow, green, blue, indigo and violet).  When arranged in a circle, the visible spectrum is similar to Munsell’s hue circle. Orange, indigo and violet are replaced by Munsell’s secondary hues: yellow-red, purple-blue and red-purple because the former are actually mixtures of the colors in the latter and not colors unto themselves according to Munsell Color Theory.

The Munsell hue circle divides the visible spectrum into equal visually stepped colors. In doing so, Munsell not only displayed color naturally—the way the eye perceives color—but also, in a logical and orderly classification. Today, designers can apply the Munsell color order system to develop color harmonies and palettes.  Gone are the days of keeping two or three wonky Munsell color atlases on your desk. Now you can obtain each page of color chips in a pocket-sized color chip kit to easily harmonize colors. [link to the kits when URL available]

Mr. Petrovich brings out an important point about the Munsell color order system, that it is as relevant today as is was in the early 1900’s. It is not only a color education and classification system, but also a color communications system. To this day, the Munsell System of Color continues to ensure color consistency of component parts and apparel manufactured throughout supply chains.  It is also the system of choice for color standards relative to food, agriculture, and the scientific community. 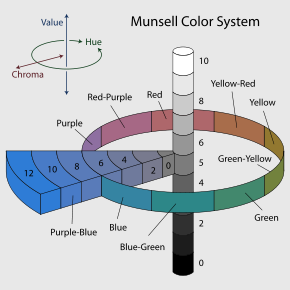 We think A. H. Munsell would have been intrigued by the “extraordinary rainbow of hues” to which Mr. Petrovich refers in his article because they can all be classified within his color order system.  Whether or not these colors are tastefully deployed is a topic for another article.

*”Munsell, the man who colored America,” was based on the book The Color Revolution by Regina Lee Blaszczyk (MIT Press, 2012).

One response to “Time for a Munsell Revival”