The Munsell Book of Color 1929: The Color Sphere

Since the three dimensions of color must be as readily understood as the three dimensions of a box, it is necessary to have in mind some simple, orderly arrangement of all colors, in which HUE, VALUE, and CHROMA are separately identified and yet comprehended together. A sphere serves this purpose. (See Fig. 3.) The top pole of the Color Sphere is White, the bottom pole Black, and the axis is the graduated scale of NEUTRAL Grays, which places N 3/ in the exact center of the Sphere. Clockwise, or “westward,” around the equator of the Sphere (as seen from the top pole), and at equal distances apart, are the five Principal HUES – Red, Yellow, Green, Blue and Purple. Spaced evenly between each two of these, in the order names, are the five Intermediate HUES – Yellow-Red, Green-Yellow, Blue-Green, Purple-Blue, and Red-Purple. 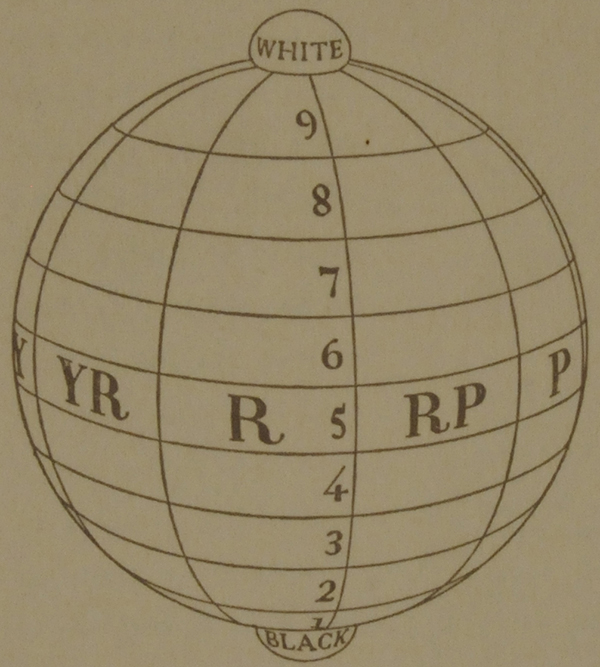 Fig. 3
The Color Sphere. The HUES are placed in sequence around the NEUTRAL axis. The axis and all the HUES surrounding it are all of the same VALUE (lightness or darkness), or any given level, increasingly ligher to White at the top and increasingly darker to Black at the bottom. From NEUTRAL Gray at the center axis. the HUES increase in color-strength or intensity (CHROMA) as the distance outward from the axis is increased.

Comparing the Color Sphere to a peeled orange composed of ten segments (See Fig. 4), each of the ten HUES would occupy one segment, its upper half blending through lighter VALUES to White at the top and its lower half blending through darker VALUES to Black at the bottom. Its inner edge, along the perpendicular axis of the Sphere, would be the graduated series of NEUTRAL Grays from Black up to White. Outward horizontally (at a right angle) from the NEUTRAL axis, at any level of VALUE, the color would become more intense in color strength, in measured steps of CHROMA. The HUES become lighter as tehy go upward in VALUE; darker as they downward in VALUE; weaker in CHROMA as they go inward toward the NEUTRAL axis; and stronger in CHROMA as they go outward toward maximum strength. 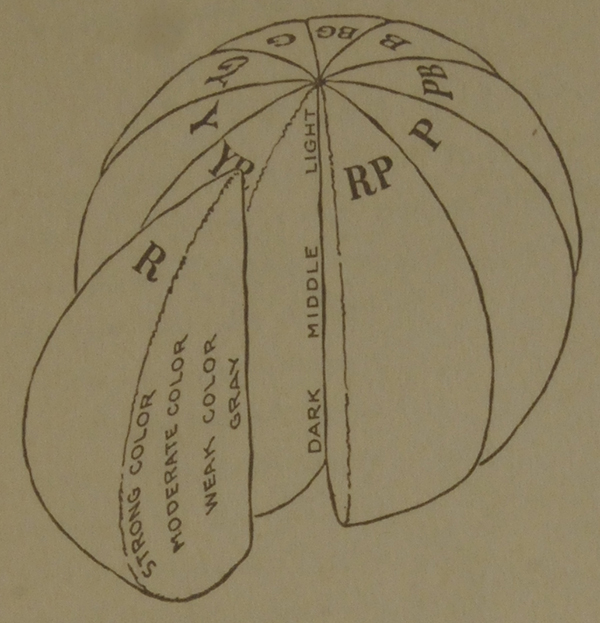 Fig. 4
An orange assumed to represent the Color Sphere, with a segment displaced to show NEUTRAL Gray center, which is Black at the bottom and blends upward through incresing lightness to White at the top. Note the change in color strength (CHROMA) onward from the center. 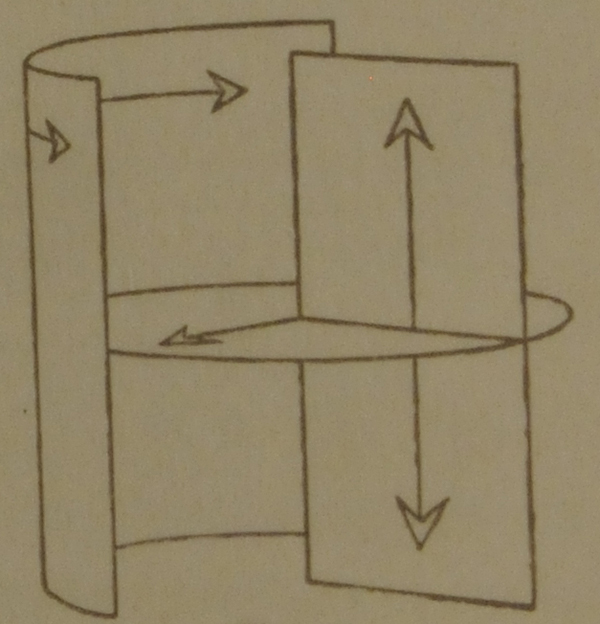 Fig. 5
A simple diagram of the three dimensionals of color. Around the center, HUES. Up and down, VALUE. Outward from the center, CHROMA.

The device of the Color Sphere is used as an aid to orderly thinking. After mastering the basic idea of HUE, VALUE and CHROMA and their relation to the Color Sphere, there are certain details concerning it which may now be considered. 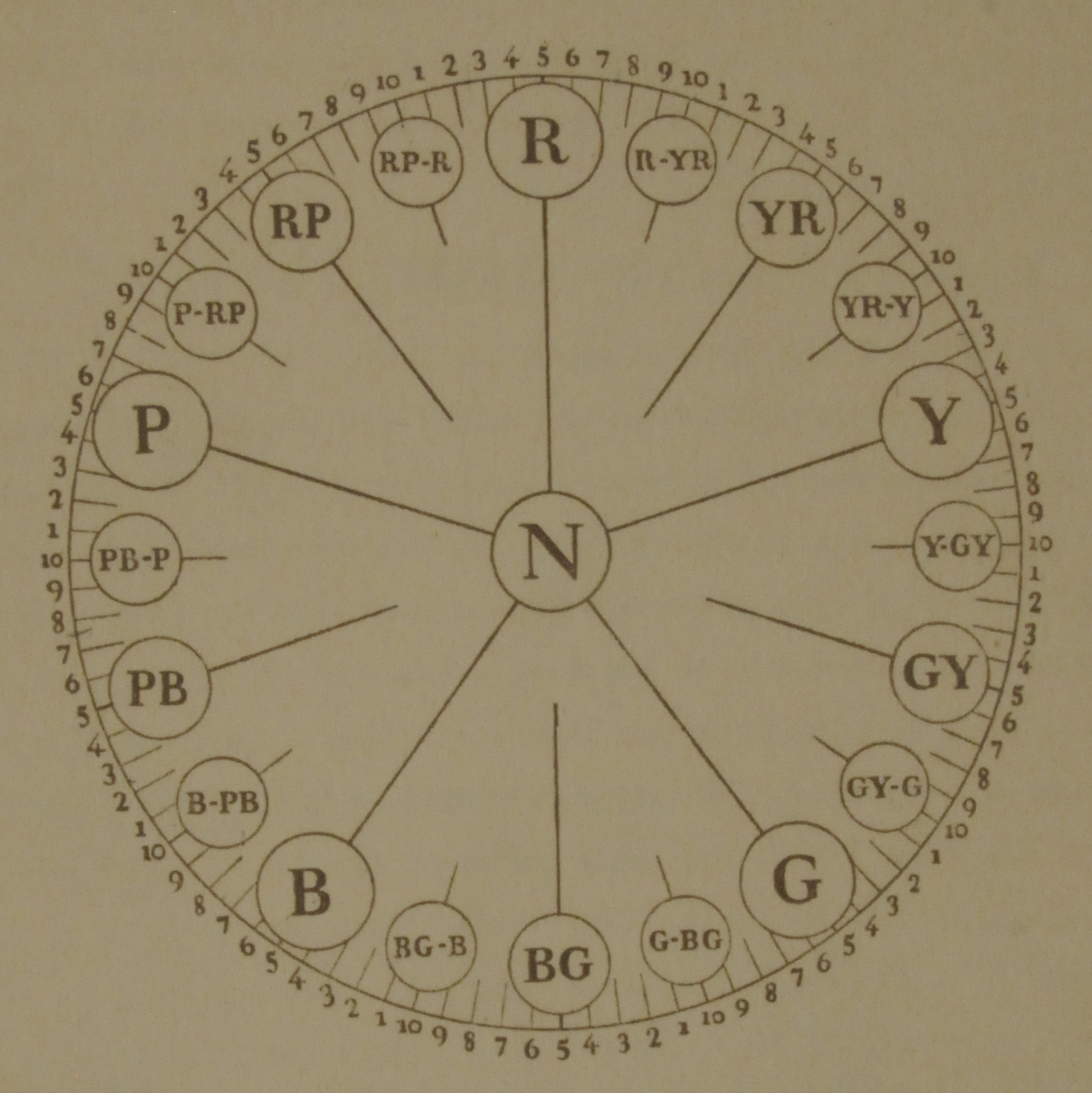 Ten HUES have been mentioned as placed around the axid of the Sphere, but obviously they are not enough, for there is possible a much larger choice of color HUES, without reference to the qualities of VALUE and CHROMA. To facilitate the ready identification of “in-between” HUES, second intermediate HUES are added in logical sequence in the succession of Principal and Intermediate HUES around the Color Sphere. Reading clockwise from Red, the sequence is: Red, Red Yellow-Red, Yellow-Red, Yellow Red Yellow, Yellow, Yellow Green-Yellow, and so forth (R-YR, YR, YR-Y, Y, Y-GY, etc.). See any chart of Constant VALUE for the complete gamut.) Also see Fig. 6) Note that in the Second Intermediate HUES, which include three initial letters, the letter which occurs twice is that of the adjoining Principle HUE; but it does not occur twice in successive in naming any of the Second Intermediate HUES. For instance, R-YR is correct, YR-R is incorrect. YR-Y is correct, but Y-YR is incorrect.

To facilitate the identification of special intermediate HUES, a hundred numerals (ten sets of ten each) are placed in clockwise sequence around the Color Sphere. And since further combinations of HUE initials (beyond three as used in a Second Intermediate HUE) would be clumsy, reach of the five Principal and the five Intermediate HUES has ten numerals (1 to 10) assigned ot it, indicating graduated steps of HUE changes from one HUE to another around the Sphere, horizontally. Number 1 of every Principal or Intermediate HUE is understood as being the number 1- of the preceding Principal or Intermediate HUE. The reason for this is that most requirements of color notation are accommodated simply by the initials of the Principal, Intermediate, or Second Intermediate HUES, the use of HUE numbers being confined to the relatively few cases where such fine HUE distinctions are required. Of course any fractional step of HUE, VALUE, or CHROMA can be written decimally.

Chromas Beyond the Surface of the Sphere

At the middle level of VALUE, the fifth step in CHROMA is placed at the surface of the Sphere, but HUES of stronger CHROMA extend some steps out beyond the surface (See Fig. 7), like immense buildings (always at right angles to the axis) on a very small Earth; or like level limbs on a Color Tree* extending through and beyond the surface of a sphere within which the tree has grown. 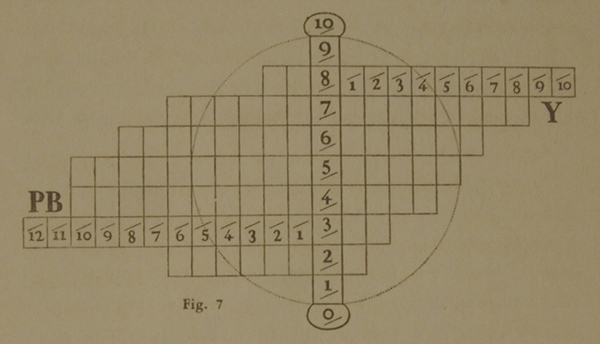 Fig. 7
Diagram showing characteristic CHROMAS etending beyond the surface of the Color Sphere, the Yellow reaching its stronger CHROMA at the 8th level of VALUE, while its opposite, Purple-Blue, reaches its strongest CHROMA at VALUE 3.

The Color Sphere does not contain all colors compressed into a symmetrically spherical form, but it is the basic idea for an orderly arrangement presenting the three dimensions of color – – HUE, VALUE, and CHROMA. Let the fifth or sixth step of CHROMA serve as a “checking Station” in memorizing the various steps in CHROMA of any HUE. Memorizing even approximately the HUES at the fifth level of VALUE and the sixth step of CHROMA is of great help in judging colors generally.

*See the description of the Color Tree on page 22. 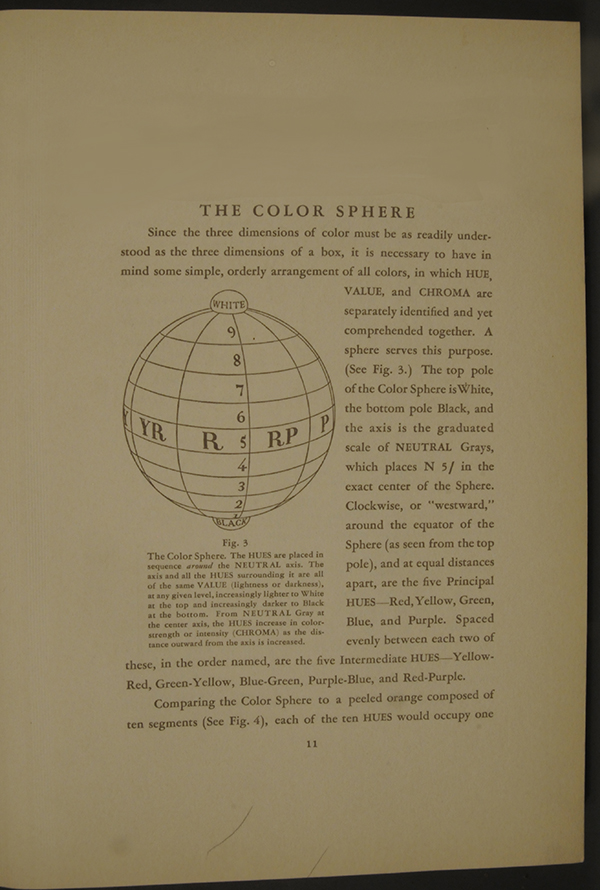 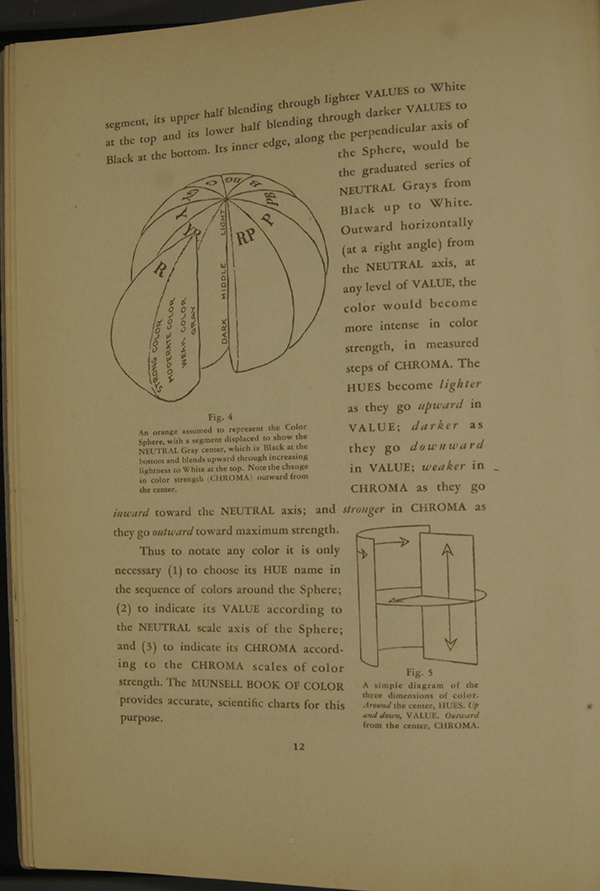 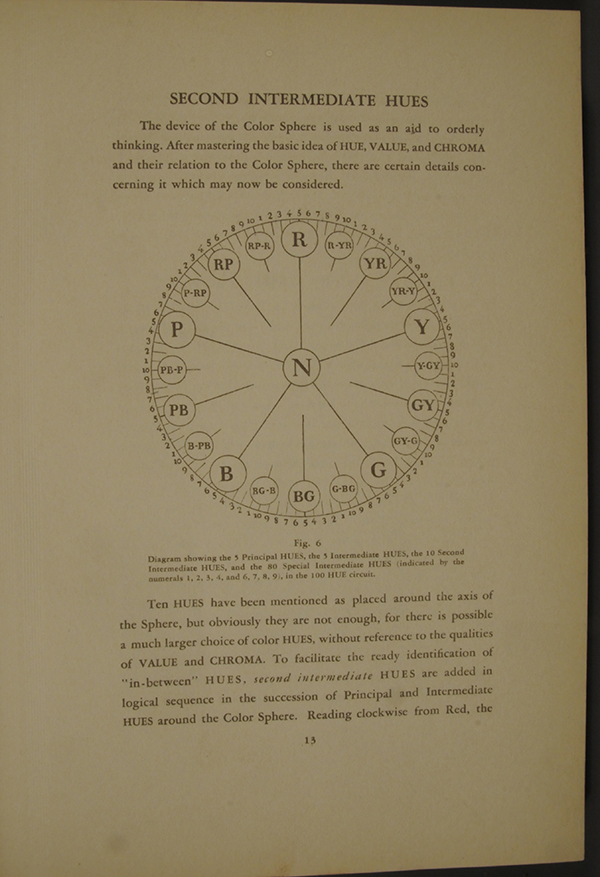 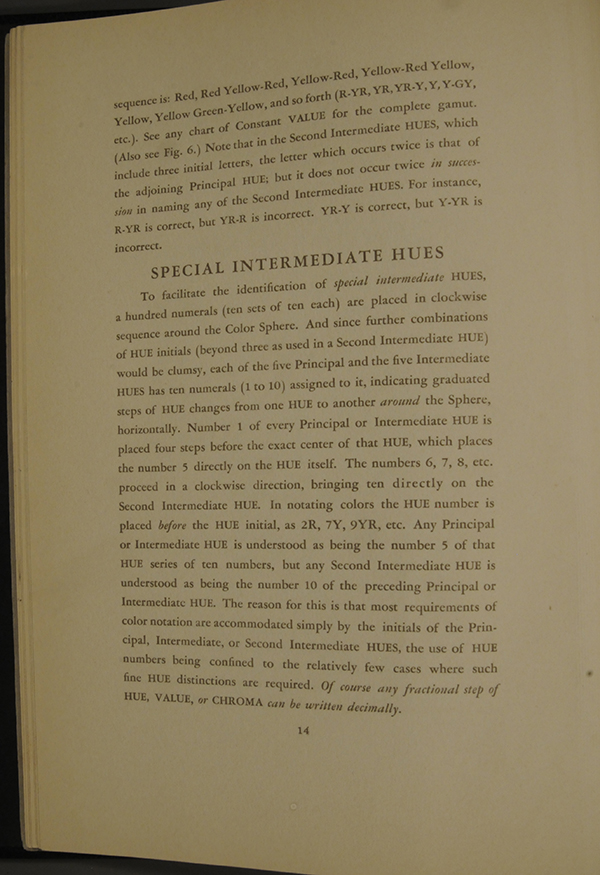 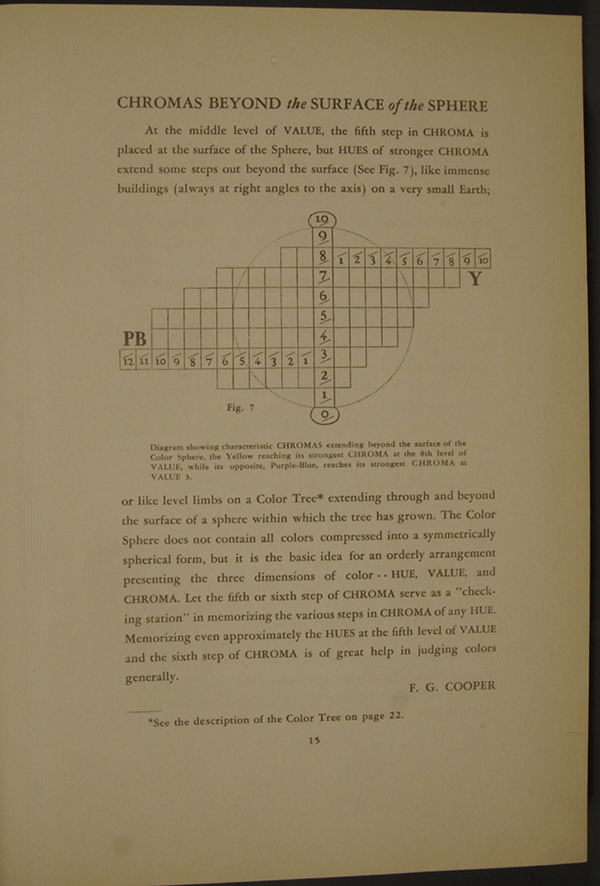 0 responses to “The Munsell Book of Color 1929: The Color Sphere”