This section of the 1st edition of the Munsell Book of Color from 1929 discusses the three dimensions of color: Hue, Value and Chroma.

Color had three dimensions, HUE, VALUE and CHROMA, which fully and accurately describe any color as readily as the three dimensions of a box describe its length, breadth, and thickness. Each of these dimensions of color can easily be measured (at a glance, with practice) and stated simply in speech and writing.

Sunlight is composed of every possible spectrally pure color,  so balanced in combination that no one color is dominant and the result is a pure white light. Passing a ray of sunlight through a prism breaks the light up into a band (the spectrum) of its component colors, Red, Yellow, Green, Blue, etc., and this distinguishing by name of any color of the spectrum from the other colors, indicates the HUE, or common name, of that color. Any RED is Red in HUE, and any Green is a Green HUE, etc. HUE is the first characteristic of a color that the eye detects. It is how we know, for instance, that a Red is Red and not Green or any other color but Red. In notating a color, its HUE is indicated by the initial letter or letters of the color referred to — R for Red, YR for Yellow-Red, Y for Yellow, etc.

Pure White is so light that no color can be seen in it. Pure Black is so dark that no color can be seen in it. But between the two can be distinguished various degrees of light strength, ranging from the darkest gray just above Black to the lightest gray just below White, and color can be seen at these various intermediate levels of light strength. For instance, Yellow is usually a light color, nearer to White than to Black. Purple-Blue is a dark color, nearer to Black than to White. This variable light strength is called VALUE, most Yellows being rather high in VALUE, and most Purple-Blues being rather low in VALUE, although of course Yellow can be very dark and Purple-Blue can be very light.

Diagram of the VALUE scale. Note on the left the Indication of the three zones, Light, Middle, Dark; and on the right the notation of NEUTRAL at the various levels of VALUE.

The eye can readily distinguish and memorize ten different steps of VALUE, graduated from Black at the bottom up to White at the top. It is not difficult to estimate with the unaided eye the approximate VALUE of any color, and it can be done accurately by comparing the color with the VALUE scale.

Theoretically perfect White and theoretically perfect Black are practically unattainable, though they can be very closely approached (for instance, pure magnesium oxide is 9.7 to 9.9 in VALUE. Practically pure Black is obtained by lining the interior of a box with Black velvet and looking into it through a hole in the cover). Perfect Black is indicated by the numeral 0 at the bottom of the VALUE scale. The next step upward is 1 (below which few Blacks go), then 2, 3, 4 and so on up to White at 10. This places the fifth step at the middle, representing a Gray half-way between Black and White. Any pure Gray is known as Neutral and is indicated by the initial N, with its level indicated by a numeral set above a line at the right, as N 2/, N 3/, N 7/, etc. N 0/ is Black and N 10/ is White, but N 1/ is the Black usually seen and N 9/ the usual White. They are generally notated so.

By comparing any color with different Grays of a scale is easy to distinguish the VALUE of that color, which simply indicates how light or dark that color is. VALUE is notated by a numeral (corresponding to the numbered levels in the VALUE scale) placed above a line to the right of the HUE designations. For instance, a Red of a lightness about half-way between Black and White would be at the first level of VALUE, indicated thus: R5/. A Yellow about two steps higher, Y 7/. A dark Purple-Blue, say about three steps above Black, PB 3/. And so on. Colors up to 3 in VALUE are said to be in the “dark zone” of VALUES; those from 4 to 6, in the “middle zone” of VALUES; and those from 7 upward, in the “light zone” of VALUES. (see Fig. 1)

Two colors may be the same in HUE (for instance, both Red) and the same in VALUE (that is, neither is lighter nor darker than the other), and yet be different in color: strength. One may be a strong Red and the other a weak, grayish Red. This difference is in the dimension of CHROMA, by which the degree of color strength (intensity) is measured and indicated.

HUE is the name of a color. VALUE is the amount of light in a color. CHROMA is the degree of strength in a color.

A step in CHROMA is the unit of measure of change in a HUE between NEUTRAL Gray and the maximum CHROMA of the HUE. Experiment has shown that is can readily be distinguished and remembered. These steps are graduated  from NEUTRAL Gray out to the strongest CHROMA obtainable in any HUE at any given level of VALUE. The steps are numbered outward from N, toward the maximum CHROMA (See Fig. 2), and in notating the color the numeral is placed below the line, under the number of value. For instance, a Red midway between White and Black, and five steps out in CHROMA, would be written R 5/5. A Red at the sixth level of VALUE and three steps out in CHROMA would be written R 6/3. The color commonly known as “rose” is a grayish Red, a Red that is weak in CHROMA, generally in the neighborhood of R 6/4. Thus the arrangement in notation of HUE, VALUE, and CHROMA is H V/C. 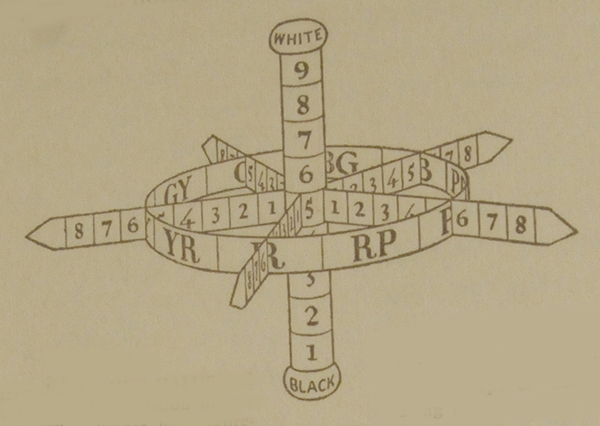 Diagram showing HUE, VALUE, and CHROMA in their relation to one another. The circular band represents the HUES in their proper sequence. The upright center axis is the scale of VALUE. The paths pointing outward from the center show the steps of CHROMA, increasing in strength as indicated by the numerals.

The CHROMAS close to NEUTRAL are known as “weak” CHROMAS; those at or near maximum strength are called “strong” CHROMAS; and those between weak and strong are known as “moderate” CHROMAS.

Red is a very powerful color at the fourth level of VALUE and can be graduated through a dozen or more distinguishable steps of CHROMA, but up at the eighth level it cannot be carried out more than a third as far.

The strongest possible CHROMA obtainable in practically non-fading color substances varies with different HUES, and at different levels of VALUE. Yellow, for instance, which is strongest only when it is light, can be divided into more distinguishable steps of CHROMA at a high level of VALUE (say the eighth) than it can at any of the lower levels; and the reverse is true of Purple-Blue, which is strongest in CHROMA at a comparatively low level of VALUE but cannot be carried out many distinguishable steps of CHROMA at a high level. This variation in maximum CHROMA at different level of VALUE is due simple to the vagaries of Nature – there is no one level of VALUE at which all HUES reach their strongest CHROMA. The level at which a HUE reaches its maximum CHROMA is called its “home” VALUE, but this may vary in the same HUE, in different pigments, dyes, etc. 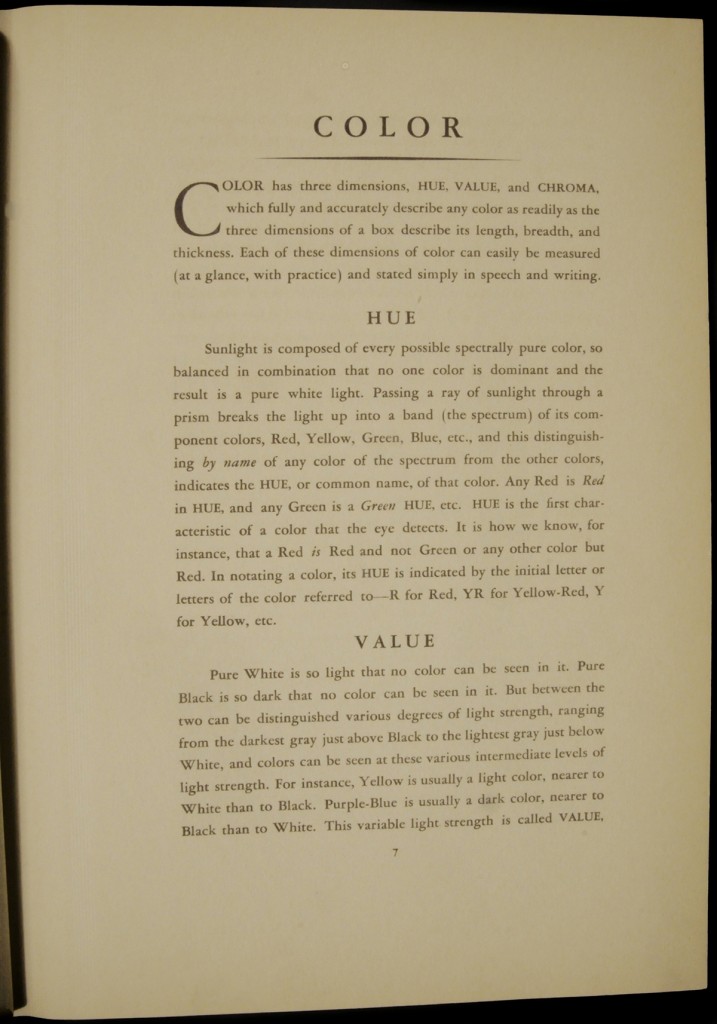 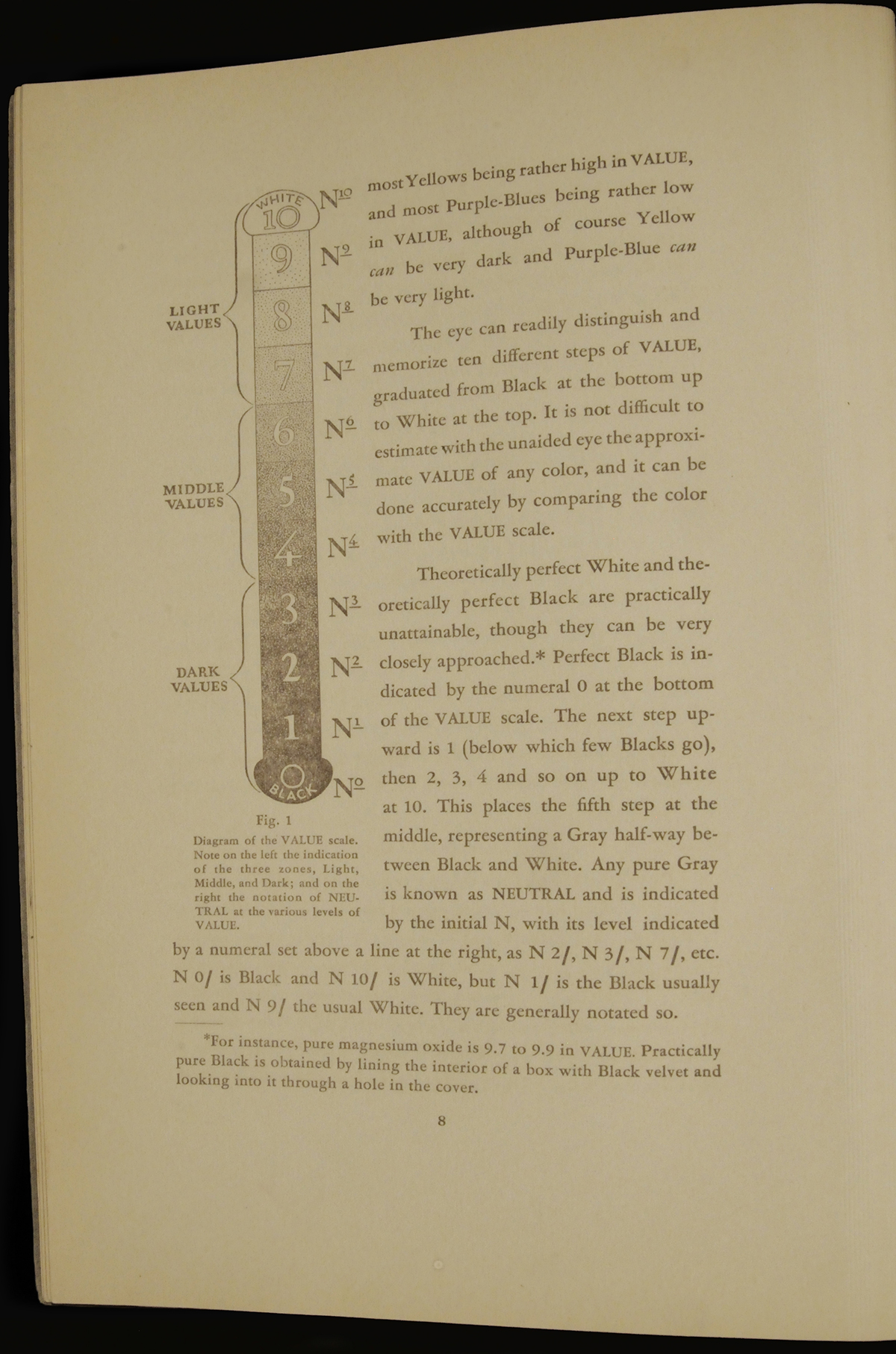 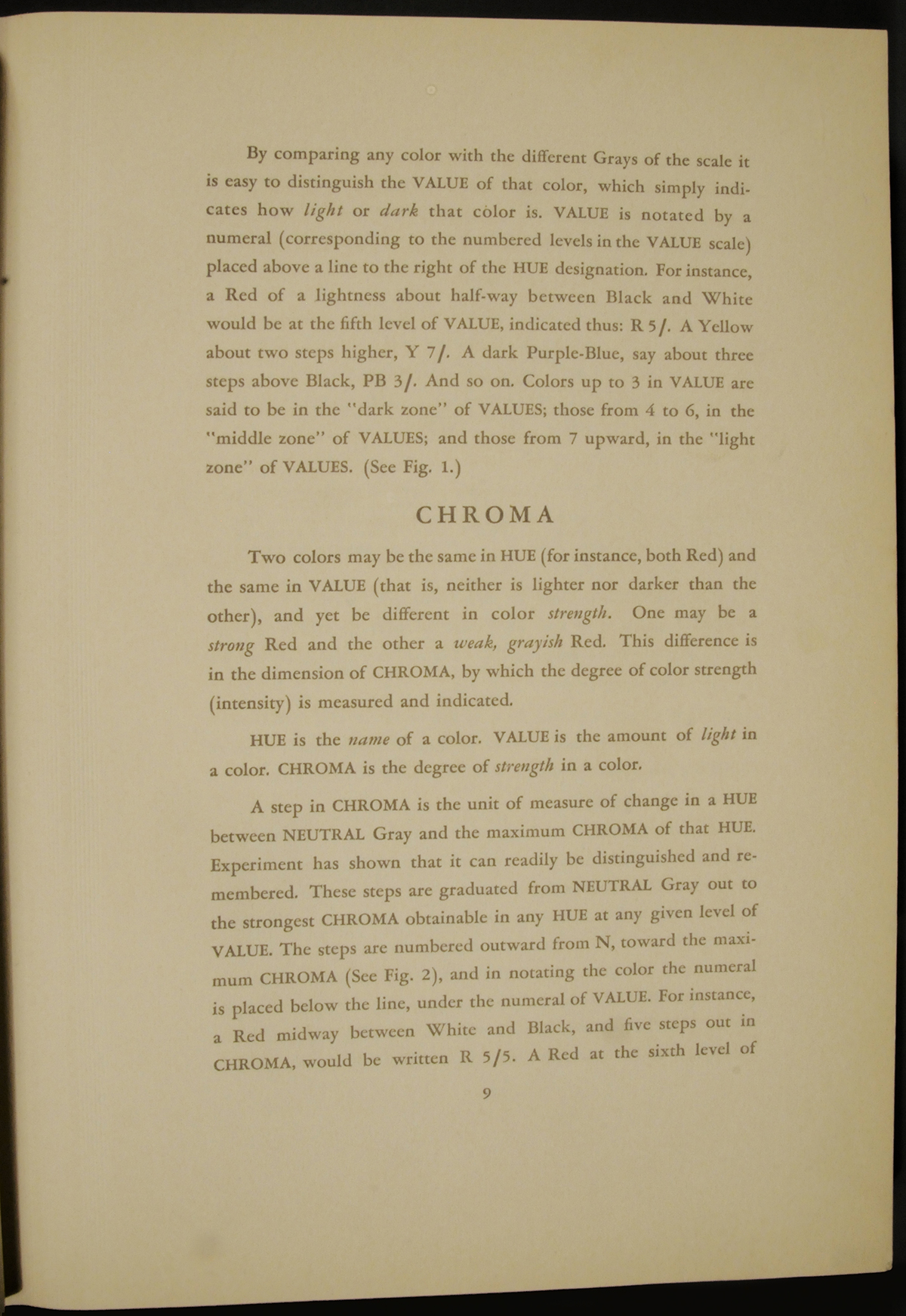 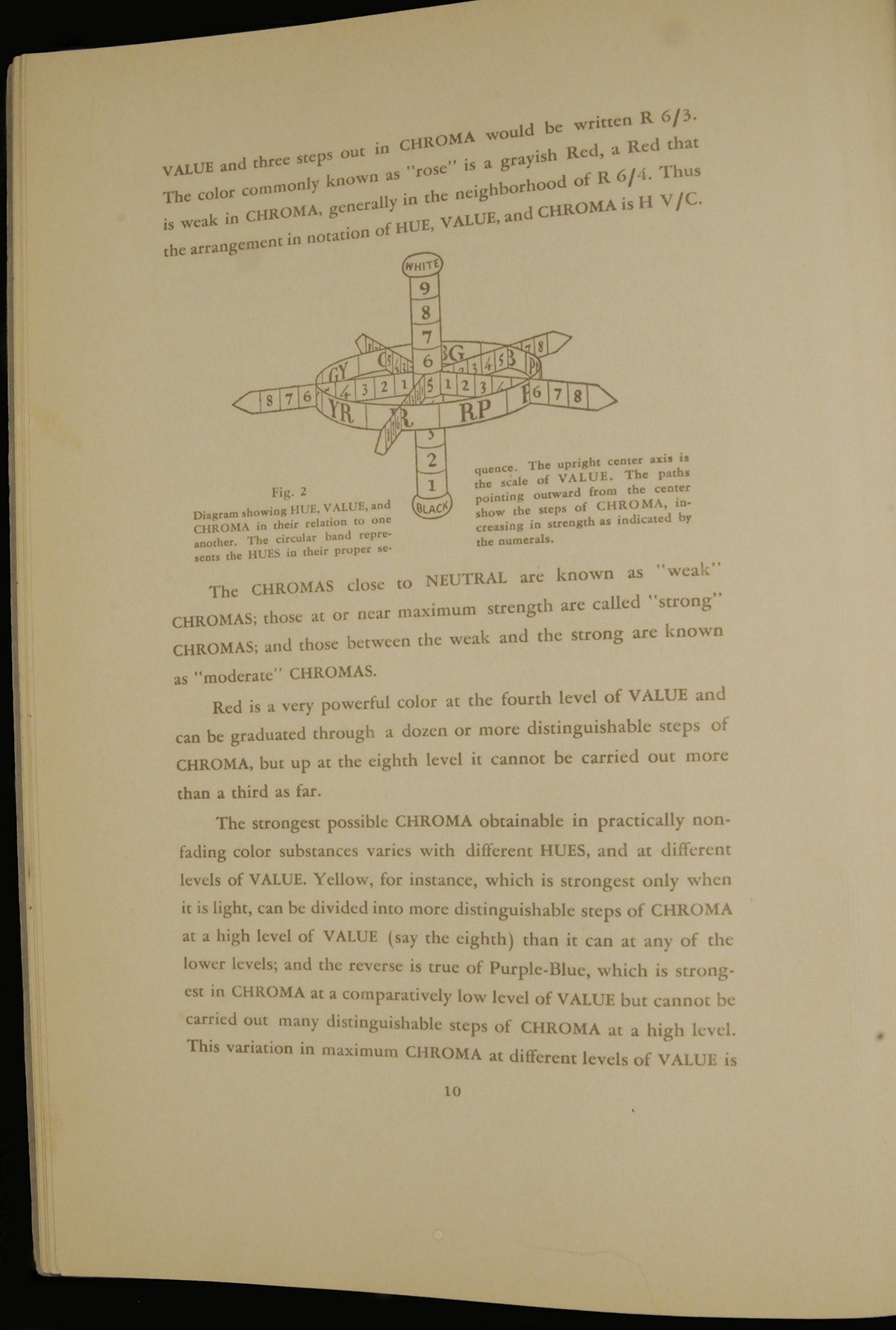 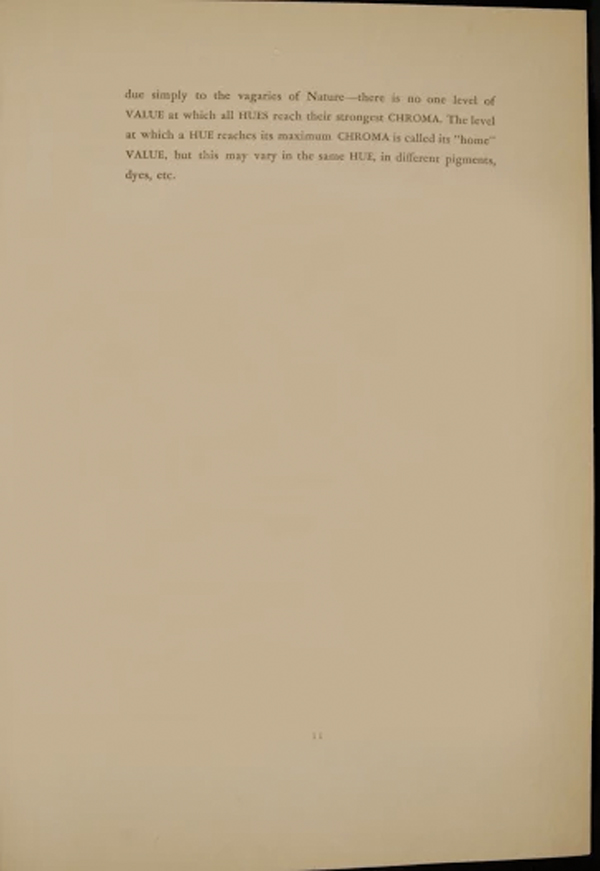 Read other excerpts from The 1929 Munsell Book of Color