The Many Moods of Mud

What is the Color of Mud?

Most people would answer brown. But in the core lab of the JOIDES Resolution, a scientific drilling ship, the sedimentologists would beg to differ.  They would tell you that mud can come in many shades of brown, gray, green, yellow and even red. And those colors can provide important clues about the origin, age and history of the small particles that make up the mud.

Mud in the Bay of Bengal

The mud we’re studying on this expedition comes from the bottom of the ocean, hundreds of meters below the seafloor in the Bay of Bengal in the Indian Ocean. These sediments have travelled a long way to get here. Their journey starts in the highest mountains on Earth, the Himalayas. These mountains are battered by wind, rain and snow, which slowly erodes them piece by piece. The eroded particles are transported down mighty rivers and carried to the sea. But their journey doesn’t end there. The sediments continue to travel through underwater canyons and channels, eventually coming to rest in the Bay of Bengal. This massive outpouring of sediment creates what’s known as a submarine fan – the Bengal Fan is the largest in the world. 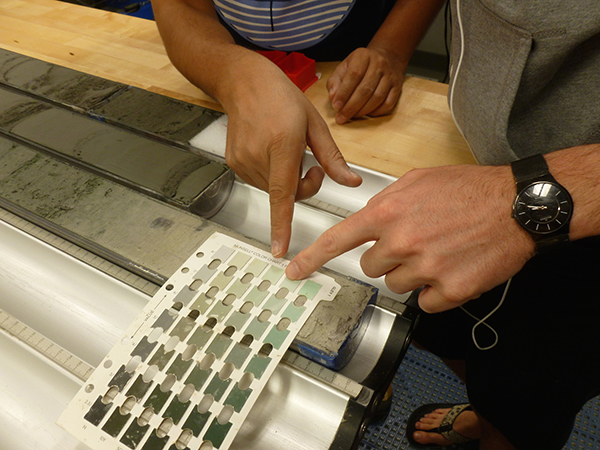 We are drilling into the middle of the Bengal Fan to retrieve cores of these ancient sediments. This 2-month long expedition has taken years of planning by teams of scientists involved in the International Ocean Discovery Program (IODP), an integrated marine research program involving over 25 member countries. The program has a long and successful history, dating back to the 1960’s when it was the Deep Sea Drilling Project (DSDP), then the Ocean Drilling Program (ODP), and later the Integrated Ocean Drilling Program (IODP). The program uses multiple drilling platforms, like the JOIDES Resolution, to explore Earth’s history and evolution recorded in subseafloor sediments and rocks. 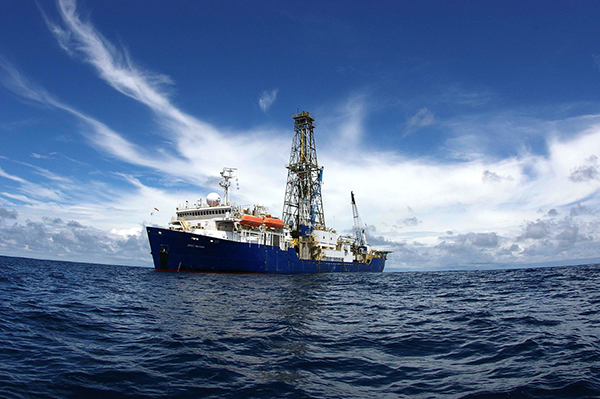 The JOIDES Resolution has been exploring Earth’s history and evolution through scientific ocean drilling since 1985. Photo by A. Sakaguchi, IODP-JRSO

Once core is brought up to the ship, it is split in half, giving the scientists their first glimpse of sediments that have been buried beneath the seafloor for possibly millions of years. There are several analyses that will take place, but one of the first priorities is to describe the core. The sedimentologists, or “core describers” as they are known onboard, are responsible for observing and recording many different features of the sediments, and one of those is color. 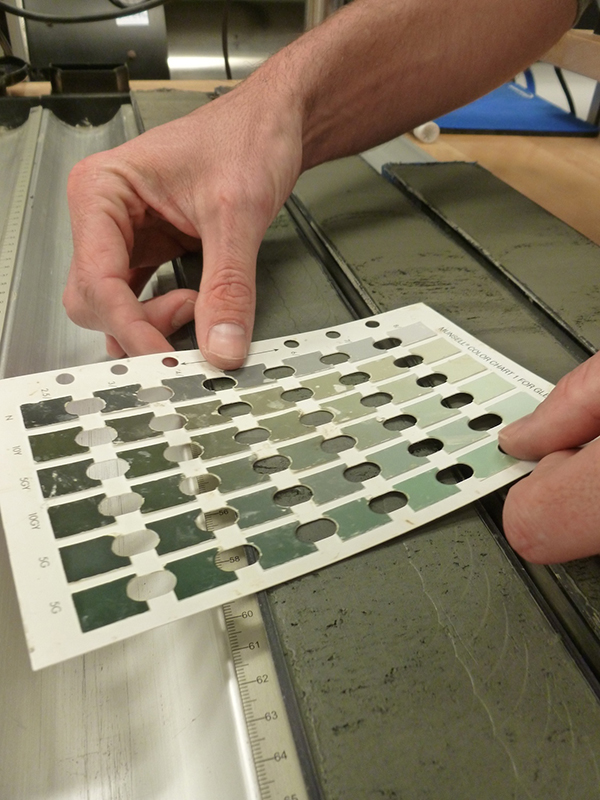 IODP sedimentologists often use Munsell color charts when they are describing the core. The charts help us to be less subjective and more specific, ensuring that the color of the sediments is being described in the same way, every time. This is particularly important when you have such a varied team of scientists who have never worked together before. It’s not unusual to have scientists from 10 different countries on one expedition. The color charts also help ensure consistency between the core describing teams on different shifts – noon to midnight (day shift) and midnight to noon (night shift).

The color of the mud is important. It is a fundamental observation that can be made right away, giving the scientists their first clue about what the sediment is made of (that is, its mineralogical and chemical composition) and what the marine environment was like when the sediments were deposited. For example, yellow can tell you something about the sulphur content, and green can signify the presence of clay minerals like chlorite and glauconite. Light gray to white mud can indicate the presence of tiny fossils with exotic names like coccolithophores, foraminifera and radiolaria, whose shells are made up of calcium carbonate or silica. Darker colors can indicate a greater amount of material that has come from the land. Black mud points to a very high percentage of organic material, and possibly an environment with little to no oxygen. Red on the other hand indicates the presence of iron, and an oxygenated environment.

All of this information adds to the story that we are trying to piece together here at the Bengal Fan. A very old story about continents colliding, mountains rising, and climate changing. 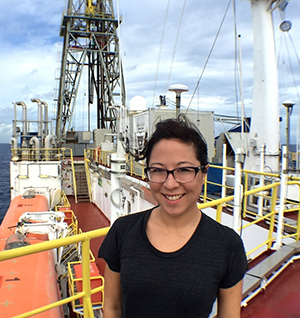 Diane Hanano is a geochemist by training and now focuses on science management, communications and outreach for the Pacific Centre for Isotopic and Geochemical Research, the Multidisciplinary Applied Geochemistry Network and the International Ocean Discovery Program – Canada. She is currently sailing onboard the JOIDES Resolution as an Education Officer for IODP Expedition 354: Bengal Fan in the Indian Ocean. Learn more about her work here: https://ca.linkedin.com/in/dhanano.