A fairly common idea about archaeology is that the goal is “to dig up stuff”—bits of pottery, bones, perhaps a stone tool or a hand-wrought nail. While this is indeed part of what archaeologists do, what we look for, in the end, is evidence in whatever form it may take.

Every day, people use objects and take actions that one would think would not preserve well after hundreds or thousands of years—walk along a path; dig a hole, then fill it again with dirt; sweep a clear space in a yard. In these cases, it is the color of the soil rather than the objects within the soil that tell the story. Higher amounts of organic material, long since rotted away, in one spot usually makes the soil darker; digging a pit deep into subsoil clays can bring lighter colored soils into areas where they do not naturally occur. Both typical and unusual activities leave long-lasting traces by altering the environment.

Which Brown is it?

For American archaeologists, the evidence can be subtle or obvious. The Munsell Soil Color Book establishes a vocabulary we can use to record this evidence. The fine, predictable variations in hue and chroma help archaeologists see color variation more effectively. Students during their first dig tend to call dirt “brown.” After they see the soil book, they realize that their first impression could use some refinement. How many ways can we say “brown”? ‘Strong brown,’ ‘dark brown,’ ‘very dark gray’ are all names in the guide that help label the variation we see below.  Even so, our vocabulary is still limited, but the quantified changes in hue and chroma show even more gradations of color, organized predictably and logically around the more generic name. So what becomes important in archaeological record keeping is less the names of colors we use, but the color values, such as 7.5YR 4/6. Names like “strong brown,” even though more specific than everyday terminology, are still a little imprecise about exactly what color it might be. The soil book deals with some of this conceptual fuzziness by including several variations in hue and chroma under the umbrella of a single color term. 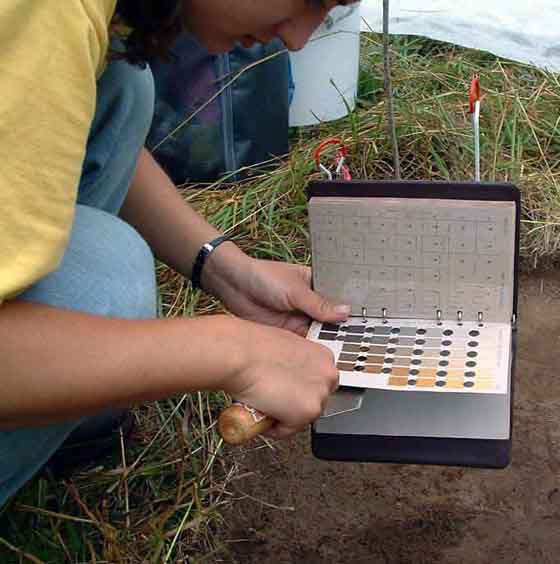 For example, every place I have worked, whether east Africa, Cantabrian Spain, the Altiplano of Bolivia, the Maya city of Copan, or Spanish colonial towns in El Salvador, has a majority of soils in the 7.5 YR to 10YR range. These pages in the soil book, like the pages of a favorite recipe in a cookbook, are noticeably more worn and dirty. The rich complexity of what these soil colors have revealed has made me wonder about the exotic places of relatively lurid greenish, blue, or ghostly gray soils of the 5R5Y and GLEY 1 pages.  Beyond soil color, introductory pages of the soil book include helpful illustrations to estimate granular and crumb structures, proportions of mottles, and coarse fragments, all observations that archaeologists record to better understand subtle and fragmentary traces. 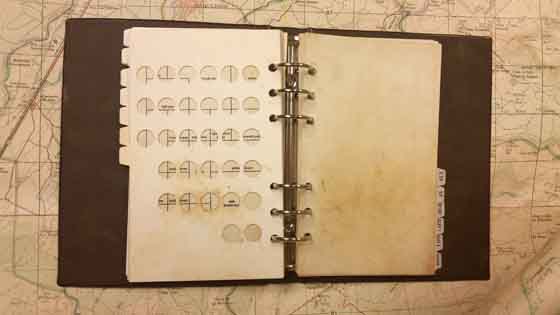 The color values, in combination with the color sample, standardize how we describe so that anyone, at any time, can know exactly what color the dirt was from… that hearth, that path, that house floor. This reliability is key, because it helps archaeologists preserve information consistently. Almost all archaeological work is to some degree destructive. Once that part of an ancient house has been excavated, it cannot be put back exactly as it was. The past persists and becomes an enduring part of our knowledge only if we record it well. The mundane realm of soil color is crucial to that endeavor, and Munsell is our guide. 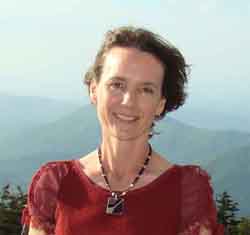 Dr. Kathryn Sampeck is an Assistant Professor of Anthropology at Illinois State University. She earned her B.A. and M.A. from the University of Chicago and her Ph.D. from Tulane University. Her research focuses on the archaeology and ethnohistory of Spanish colonialism, Mesoamerican literacy and writing, and the social history of American commodities such as cacao. Sampeck has been awarded fellowships by the John Carter Brown Library and the John D. Rockefeller Library, Colonial Williamsburg as well as grants by the National Science Foundation, Wenner-Gren Foundation for Anthropological Research, Social Science Research Council, Fulbright program, and Cherokee Preservation Foundation. Her publications include articles in the International Journal of Historical Archaeology, Mesoamérica, Ancient Mesoamerica, and La Universidad, as well as forthcoming works in American Antiquity, Historical Archaeology, and Ethnohistory. She tweets and posts about colonial life, Latin America, archaeology, and chocolate regularly—follow her on Twitter, Instagram and her blogs on http://kathrynsampeck.wordpress.com/ and http://colonialcherokeearchaeology.blogspot.com/