Uni-Watch deconstructs sports uniforms and maintains a visual history of sports design. So what do sports uniforms have to do with Munsell? Color of course. We invited Phil Hecken, the Weekend Editor for Uni-Watch, to talk about the upcoming Super Bowl and the history of the team’s colors.

The Denver Broncos, the AFC representative, and the Seattle Seahawks, representing the NFC, will take the field for Super Bowl XLVIII wearing Broncos Navy, Orange and White, and the College Navy, Wolf Gray, Action Green and White, respectively. Yes, those are the official colors of both teams. But with the Broncos as the home team, they’ll be wearing their orange jerseys with white pants, while the Seahawks will counter with white tops and blue pants. 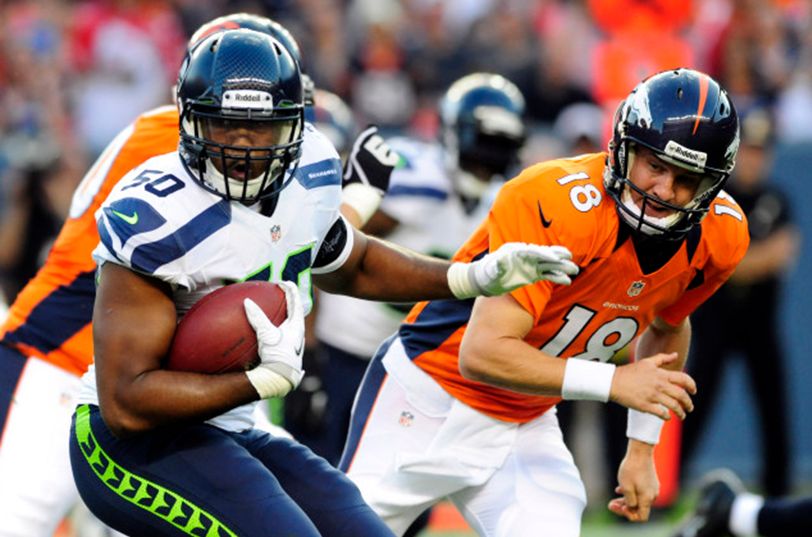 The “current” Broncos uniform is actually quite “old,” in football years, the design having first been introduced 1997. Back then, the Broncos wore a navy blue top and white pants at home, and white over white on the road. The design then was fairly “radical,” (and by Nike), but in their first two years wearing it, they won two Super Bowls (they had lost their previous four in different uniforms).  In 2002, the Broncos would add an orange alternate jersey, which is basically the same jersey as they will wear in the Super Bowl.  They wore that sporadically in 2002, and 2004, and it became a permanent alternate in 2009.  That jersey, which harkened back to their past as the “Orange Crush,” was very popular with the fans. It became their regular home jersey in 2012.

But the Broncos, famous for their orange and blue, didn’t start life in orange or blue. As one of the original AFL franchises, for their first two seasons (1960 and 1961), the Broncos wore brown and gold.  It was a very distinct uniform, featuring vertically striped socks (actually stirrups), despised by the players (and apparently the fans too).  Those uniforms (gold jerseys at home, white on the road) would last only two years. Interestingly enough, both were brought back in as throwbacks, when the AFC held its fiftieth anniversary season in 2010. They proved more popular as throwbacks than as regular uniforms. 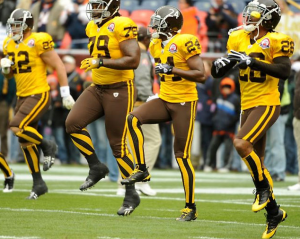 Beginning with the 1962 season, the Broncos would switch to orange jerseys at home and white jerseys with blue numbers for road games. Both would be paired with white pants with blue and orange stripes. They’d keep that look for 3 years, and in 1965, they’d move to a much more reddish-orange, and add blue stripes on the sleeves. Their road jersey would reflect similar changes. Officially, the colors were known as “burnt” orange and royal blue. In 1967, the Broncos would jettison their orange helmet for a blue one (the familiar “D” with bucking bronco would be added in 1968) and the wide sleeve stripes would be replaced by a thinner blue-white-blue stripe. This look, more or less, would remain unchanged through 1996. Color-wise, the Broncos wore burnt orange, academy blue, and white, from 1972-1976.  In 1977, the reddish-orange would return to just “orange,” and the blue became royal blue once again, and those colors would remain unchanged through 1996. 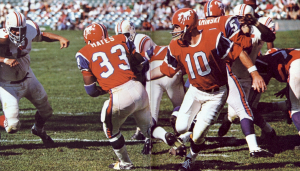 Image courtesy of Remember the NFLowl.jpg

In 1997, a major uniform overhaul occurred under Nike, who had their clothing contract at the time, and the familiar orange jersey was replaced with a blue one – officially their colors became “Broncos Navy, Orange and White.”  That look has lasted through today, with the only major change being the designation of the orange jersey as the primary, relegating the navy as the alternate.  The only other (slight change) occurred in 2012, when Nike replaced Reebok as NFL uniform supplier. Under Reebok, the Broncos had retained Nike’s original pants striping, in 2012 Nike made the stripe more pronounced and added a contrasting color outline. 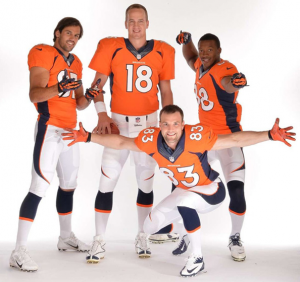 The Seattle Seahawks entered the NFL as an expansion team in 1976, wearing blue, silver, green and white.  In their first year, in an odd quirk, they played in the NFC, being transferred to the AFC in 1977. Their silver helmet featured the image of a “Seahawk” (technically an Osprey), and the design was meant to reflect design elements from native peoples. The sleeves on both the blue and white jerseys, were five-striped. This design lasted through 1982. In 1983, and lasting for almost a decade (through 2001), the Seahawks would add a mesh jersey for both home and road, which added the Seahawk logo to the sleeve stripes (they’d wear these for warmer weather and dome games). The non-logo’ed (non-mesh) jersey would be worn as well. They’d wear these uniforms until 2002. 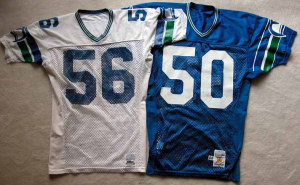 2002 brought Reebok to the NFL as official uniform supplier, and with it, the Seahawks underwent a radical uniform and brand change, with their official colors becoming Seahawks Blue, Dark Navy, Bright Green, and white. They also got a new blue helmet, with a slightly altered (angrier) logo. These colors and uniforms would last until 2011 (the last year of Reebok’s contract, coincidentally). During these years, the Seahawks usually wore blue over blue at home, and white over white on the road, although they would occasionally mix and match the blue pants with the white tops. In 2005, the wore blue over white for the only time in this uniform’s 10 year run. For one game, on September 27, 2009, the Seahawks would wear neon green jerseys (and new navy pants).  With the news that Nike would be taking over the clothing contract for the NFL in 2012, the Seahawks worked with them to design a new uniform for the 2012 season.

The new Seahawks’ uniform was introduced in 2012, in College Navy, Wolf Gray, Action Green, and white, offering the Seahawks myriad combinations. The design was quite different from the 2002-11 design, with a new helmet, and a uniform that featured native-inspired design elements on the pants, collar, and sublimated into the uniform numbers. 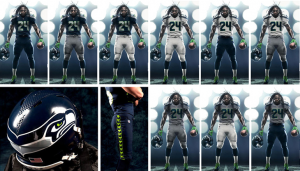 And there you have it. Broncos in orange and Seahawks in white, in two of the more “modern” uniforms in the NFL facing off at the Meadowlands on February 2, 2014, for the right to be called “NFL Champion.”