Archaeologists, soil scientists, geoscientists and geoarchaeologists are much indebted to Munsell for their Soil Color Charts. The first time I saw them I was a first-year undergraduate student doing archaeological fieldwork somewhere in Italy. A geoarchaeologist – Professor Mauro Cremaschi, who later became my supervisor – suddenly appeared to describe the site topsoil with that ‘book’ I had never seen before: “Ehm, sorry… what is that?” – “Color charts…” – “Color charts? May I see them?” – “Yes, of course, but please do not soil them”. Having the Soil Color Charts in my hands was amazing. I thought: “Wait… here is a system to methodically describe color, to quantify it, to name it… this Munsell chap was a sort of genius!”. Still, I could see there was much more.

The Importance of Color in Understanding Formation Processes

Color in soils is controlled by few factors:

Assessing color is thus a way to understand how the soil was formed. The same can be said for archaeological layers, whose color may vary according to similar factors or to other human controlled features – such as the presence of charcoal, ash or phosphate – or processes – e.g. firing. This means, for archaeologists, understanding what we call formation processes, that is, answering on a fast track to questions like:

Needless to say, from that day the Munsell Soil Book became standard equipment during my fieldwork – together with other items such as trowels, knives, rulers, field-book, pencil, plastic bags, labels, photo camera… (well, the ’80s, good old times!). The charts I had seen for first time in my life came with me through fieldwork for my graduate thesis – my supervisor lent them to me and got them back once I graduated, when I had enough money to buy my own charts (the old ones, brown backed). After my PhD I could afford one more set of charts (the blue ones), which came along with me to archaeological sites and excavations in Belgium, Portugal, Spain, Greece, Turkmenistan, Oman, and Italy of course. 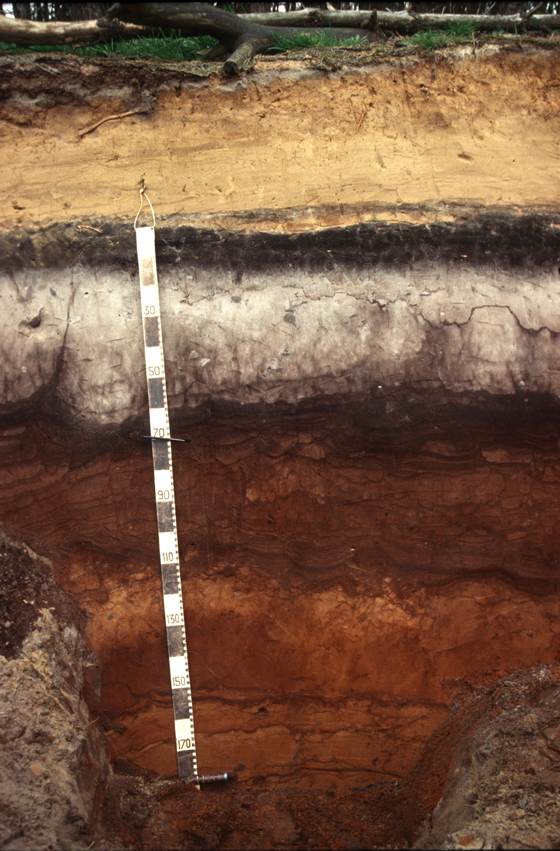 A soil profile with gorgeous colors from northern Belgium (the type of soil is called podzol) – it clearly shows why we need Munsell Charts.

The Munsell Soil Book is still a solid, universal, reliable item. I do not know any other code nor system to describe the color of sediment, soil and archaeological layers – or even pottery. Today, it is amazing watching my students during my geoarchaeology lectures when I first show them the Charts and explain how they work; many years have passed (my present students belong to the ‘digital native’ generation) but they look as amazed as I looked many years ago. The Soil Color Charts still work and will always work, as they are simple, straightforward and clear. 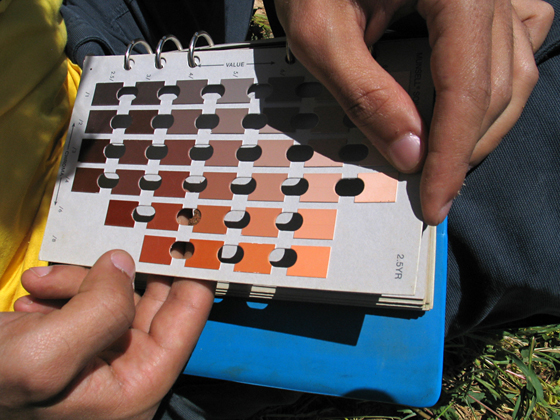 A student uses a Munsell Soil Chart to check color.

That was about me, but there is more. While checking through the Munsell website, Teresa Medici, my wife (she is an archaeologist studying ancient glass) screamed: “Look, there are also Munsell Charts for glass beads!” Well, more Munsell Charts at our place… 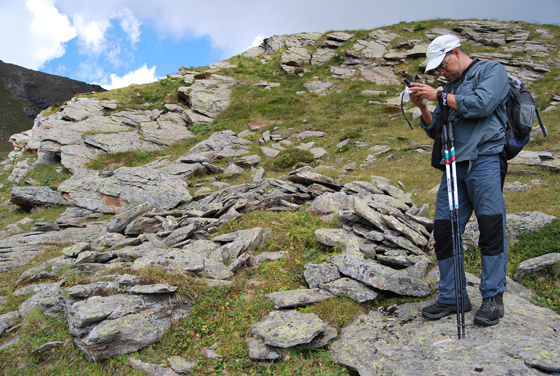 Dr Diego E. Angelucci is a geoarchaeologist and serves as an Associate Professor of archaeological method at the University of Trento (Italy). His research is focused on archaeological site formation, particularly in mountain context and in the Mediterranean environment. He has been using Munsell Soil Color Charts for almost thirty years.