A Review of the Nickerson Horticultural Fan Deck

This review of the Nickerson Horticultural Fan Deck first appeared in, The Bulletin of Popular Information of the Arnoldia Arboretum, Harvard University, September 20th, 1957. It is still relevant today to show the reasoning behind creating a color standard for Horticulturalists and why the Munsell system was chosen.

“The time has come for American Horticulture to adopt some uniform standard by which color can be accurately measured and uniformly judged and described the country over. Many industries have done this. Horticulture seems to be far behind… Those of us who are constantly studying plants realize better than most, the necessity for having an accurate standard by which we can compare the colors of flowers, foliage and fruit, and afterwards to describe those colors in uniform terms understood by other individuals who have not seen the plants themselves.”

This statement appeared in Arnoldia in 1947 and is just as true today. It was written in an article describing the Royal Horticultural Colour Chart, and it was hoped at that time that this would be the chart which would become accepted in America. However, with no organization to champion this chart in America, with its comparatively high price, and with practically no American publicity and hence its unavailability, it has not become widely used.

The American Horticultural Council became interested in this color problem in 1949, and since that time has been studying various charts and possibilities for publishing charts in the hope that finally it would be able to have an accurate chart that would prove satisfactory for all horticultural needs. and at the same time stay within the limits of a moderate price.

The Nickerson Color Fan, just published and now available to horticulturalists through the American Horticultural Council’s Office at the Arnold Arboretum, is just such an accurate but reasonably-priced chart. It folds into a booklet 7 1/2 inches long by 1 3/4 inches wide, which fits easily in any pocket or handbag. It contains 262 colors of 40 hues. It is available for $5.00 postpaid, is sponsored by America’s outstanding color foundation, and can well become the standard for all American horticultural interests. 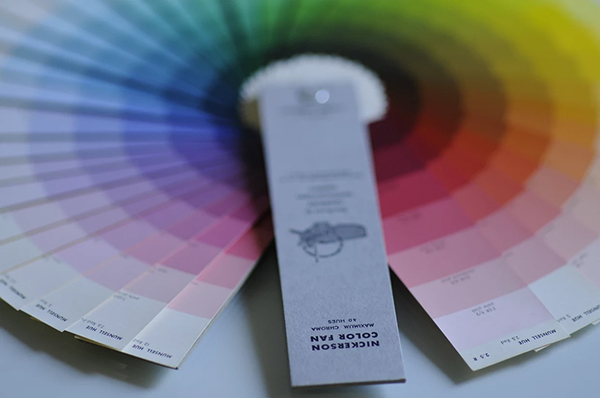 Included with this color chart is a twelve-page booklet explaining the use of this fan in detail. Printed in small letters on each color, is the popular color name and it numerical designation in the Munsell color system, which is fast becoming accepted as standard by many industries and societies dealing with color systems in America. The charts uses simple color names that have been selected as standard by the Inter-Society Color Council and the National Bureua of Standards.

The numerical color system may seem a little complex at first, but as one uses this chart and becomes familiar with it, this system is the means for estimating the value of colors which may not appear in the chart but do appear in the flowers or fruits being studied. With practice, the notation may be used to express as fine a color difference as the eye can see. As knowledge is gained of the principles upon which the Munsell system of notation is based, visual judgements of the amount and direction of the departure of the samples from the scale colors can be made and recorded by reference to the notations on the scales. There should be no difficulty for observers with normal color vision to agree regularly on the nearest hue and value, and within reasonable limits, on the closest chroma. It is this factor of one’s being able to estimate colors accurately according to this numerical system which makes the chart so valuable.

There is a great disparity in color terminology, especially in horticultural circles. For instance, Cercis canadensis has been described by various authors as having flowers that are “pink flower bud, deep red calyx,” “rose pink to purplish,” “pink to purplish pink,” “reddish purple or pink,” “red,” “rosy pink,” or “bright pink to purple.” By the use of this chart it will be noted that they should be described as being a moderate purplish pink (2.5 RP 7/7). In this way, although the common general color name is given, so is the accurate Munsell number which refers to a particular color hue, color value (lightness of color) and chroma or saturation of color. About such a particular determination there can be no question. When one reads such a description, he can refer directly to the color chart and determine the exact color being described to his own satisfaction.

The Nickerson Color Fan can be opened up into the form of a complete wheel. If wanted, a form is obtainable on which all of the leaves can be pasted to form the complete color wheel. This type of chart is necessary frequently in studying complementary colors for flower arrangements. However, the ease with which the fan can be folded and carried in the pocket makes it of inestimable use as a reference in the field as well as indoors. 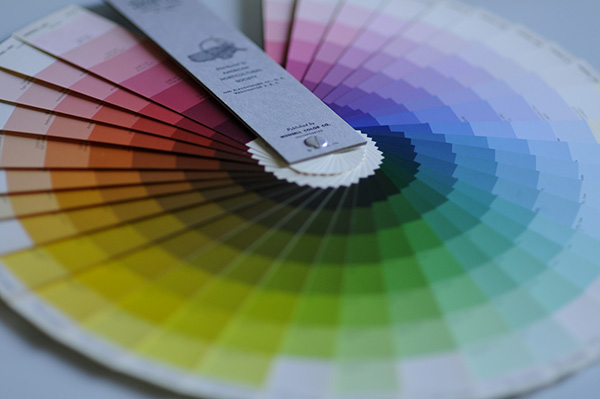 The American Horticultural Council asked Miss Dorothy Nickerson to discuss color and color charts at one of its first meetings in 1949. Since that time, Miss Nickerson, who is Color Technologist in the United States Department of Agriculture in Washington, has become intensely interested in horticultural needs for a standard chart. Being a trustee of the Munsell Color Foundation, she was able to bring the need for such a chart before the Munsell Foundation. This is a private, non-profit foundation, owning the Munsell Company, established to further research in color. The chief tasks laid down for the Munsell Color Company by the Foundation are to develop and supply accurately-controlled color standards at near cost and to supply literature for describing the Munsell System and its application. Plans call for the publishing at some later date of three additional fans: one low chroma fan of ten hues, a moderate chroma fan of twenty hues, and a fan of near whites. However, these will probably not be available for some time. 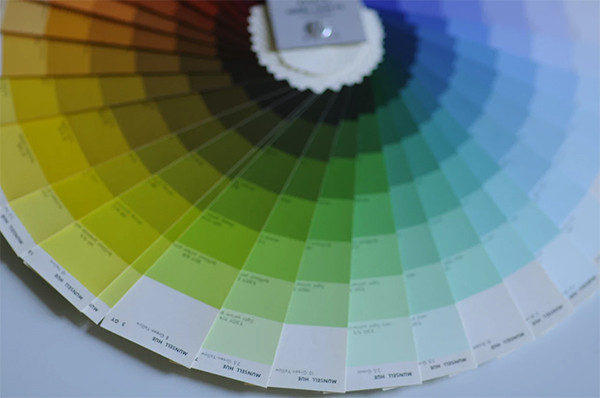 For those who have used the Royal Horticultural Society’s Colour Chart, there is included with ever Nickerson Color Fan a table of conversion data, so that notations made from the Royal Horticultural Society’s Color Chart can be quickly converted to the Munsell notations used on this new color fan. This, then, is an accurate means of determining colors indoors and out. It is readily available, practical to use, and considering the number of colors, comparatively inexpensive. This new color chart, it is hoped, will quickly become a common reference tool in American Horticulture. – Donald Wyman

Published by Arnoldia, A continuation of the Bulletin of Popular Information of the Arbold Arboretum, Harvard University, September 20th, 1957 (volume 17, Number 10).