It was 1900, and as Albert Munsell continued to develop the Munsell Color Theory, he was determined to put his color system to work in education.  After all, Munsell was as much an educator as an artist, whose life work was based on finding a way to make color communication and education easier and more understandable.

The true test of Munsell’s achievement came in June of 1900 when Myron T. Pritchard, master at the Everett Grammar School of Boston, Massachusetts, approached Munsell to develop a text book.  Pritchard wanted the book to be used by teachers to help them explain the Munsell Color System to students from grammar school to high school.    His two criteria were that the book be elementary, as for a child; and assume that the teacher is ignorant of color.  No problem for Munsell.  He had already spent the past ten years developing his color sphere, which was an integral part of the text book. 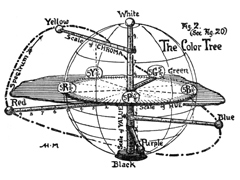 Munsell tells us in his color diary that Pritchard said of Munsell’s handbook that, “It is interesting – I am under obligation to you for a new view of color.” Pritchard also mentioned that he thought Munsell’s book was “a necessity in education.” (As it turns out, the Munsell Color System is still “a necessity” in color education today.)

Munsell’s “Hand-book of the Color Sphere”

Munsell believed that the color sphere was essential to teach accurate ideas of color value. To that end, he developed his “Hand-book of the Color Sphere” for teachers and their students to help train them on what Munsell calls “color sense” – understanding color names and their values.  The hand-book described the color sphere and its evolution and also explained the practical application of it using real world examples.

Perhaps the most valuable idea behind the Munsell Color Theory is the fact that his color sphere concept allows for nearly infinite colors, each of which can be easily imagined when you learn how the system works—much the way understanding how latitude and longitude lines of a globe can give you a general idea of geographic location.

The color sphere concept is still used today by Munsell Color, Division of X-Rite, to establish government and industry color standards and environmental color standards and to manufacture the Munsell Books of Color for color palette development and communication.  Munsell’s “Hand-book of the Color Sphere” along with lectures on Munsell Color Theory were precursors to Munsell’s AColor Notation.   The first edition was copyrighted a few years later in 1905, in which Munsell addressed his work in color education:

“The teacher’s skill is shown in searching out the simplest and most easily grasped facts; in finding not only an ‘easy door’ but the ‘right door’; in leading the children through the maze of color by steps so clearly understood and remembered that he will safely find his way along and not become confused.”

Munsell continued to develop his color theory beyond the information provided in the handbook.  In fact, Munsell’s work had gained such notoriety that he earned the distinction of freely consulting with many of the era’s leading color theory gurus, including Professor Ogden Rood, a physicist from Columbia University who specialized in color theory; Professor Harry Clifford, Electrical Engineering department head at MIT; Professor Denman Ross of  Harvard specializing in art theory and history; and several other luminaries of art and science.

The Munsell Color System was the result of Munsell’s relentless persuit of a systematic and easy-to-use method of communicating and teaching color.  Thanks to input from scientists, artists and teachers, the system continues to provide color education and communication in academia, government and industry.

Learn about Munsell, Color Education Products – the fruits of Albert Munsell’s early labors, including Munsell’s color sphere, the model of which is now referred to as a “color tree.” (We’ll explain the origin of the “tree” concept in another post.)