Munsell Color System; Color Matching from Munsell Color Company > Color Theory & History > A Grammar of Color – Part 11: Suggestions for Use & A Note on the Printing of this Book

A Grammar of Color – Part 11: Suggestions for Use & A Note on the Printing of this Book

Our series of excerpts from the 1921 book, “A Grammar of Color,” continues with Suggestions for Use of this Book and A Note on the Printing of this Book.

Suggestions for Use of this Book

While some comprehension of the Munsell System of Color Measurement and Balance will, of course, make the color sheets of this book not only more intelligible, but more interesting, it is by no means essential to the usefulness of the book for those who have occasion to use or to select colors for printed matter.

The color sheets themselves present a considerable number of balanced combinations which are readily applicable to printing on these papers; and by experimenting with the extra sheets in the separate container, in accord with the instructions printed on them, the range is greatly increased. Also, the fact that nearly all the colors printed on any one sheet are so interrelated that they may be used in different combinations, than those shown, further multiplies the possible color combinations obtainable.

Each sheet is so arranged that any one of the pairs of color areas printed on it may be studied separately from the others. The slits divide each pair of areas into separate flaps, any one of which may be folded out over the fore-part of the sheet, as shown here.

By turning back the fore-part of the sheet, the color numbers will be revealed in positions opposite to each pair of areas. These color numbers or formulas are printed within a geometric form, corresponding to the forms of the areas to which they refer. These are the formulas of measurement according to the Munsell System, giving the three dimensions of each of the colors to which they refer.

The color of the paper of each sheet has been measured and the colors of the areas are related to it. On the inside of the sheet will be found a brief analysis of the series of colors used on that sheet. One of the pairs of colors has been selected in each case to print a decorative design, bearing the name of the paper, on the inside of the fore-part of the sheet. These two colors are also shown on a diagram in the positions they occupy on the scales of Hue and Chroma. Their positions on the scale of Value cannot be shown because the diagram is necessarily only two-dimensional. 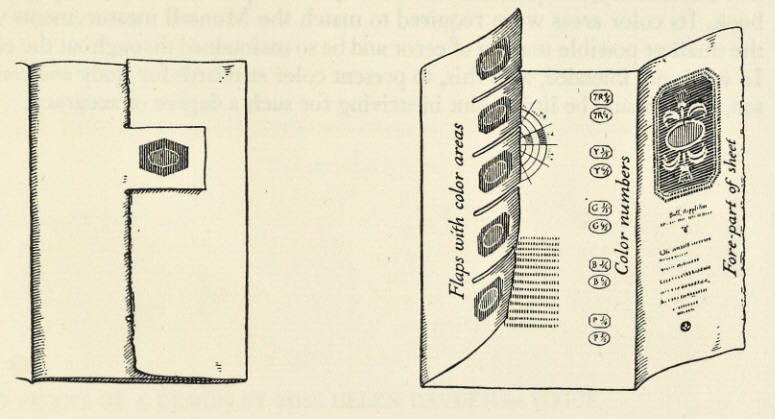 A Note on the Printing of this Book

It has been suggested that printers would be interested to know something of the manner in which this book was printed, inasmuch as it presents some unusual problems of presswork and handling.

The color sheets were printed one up, on a single Kelly press, in a small pressroom entirely devoted to this job. The great number of impressions required on each sheet made speed and automatic feed almost imperative; and the constant changes of color called for an inking distribution system that was readily accessible to wash up. Five color areas were printed at one time by means of a closely divided fountain and split rollers. These areas, being printed across the shorter dimension of the sheet, made it necessary to run the sheet lengthwise instead of the way this size sheet would normally be run. The press was slightly altered by lengthening the feed and delivery boards and retiming the drop guides, and was set to double roll, because the sheet was actually longer than the printing circumference of the cylinder. Also the motion of the inking vibrator was somewhat curtailed because of the small space allowance between colors. In printing the inside of the sheet, no divided fountain could be used and the sheets were run in the normal way. Plates were beveled and mounted on patent blocks.

In nearly every case, a complete block of the areas and of the design on the inside of the sheet was run first with one impression of a white filler; and the different colors were printed over this. In a very few cases more than one impression of color was required.

The printing of the middle gray sheet, with the diagram in colors showing the three dimensions, was a special problem in itself which called for considerable care and patience. None of the colors or the different steps of gray was made by over printing, each one being a distinct impression over a white filler. Though some few of these colors were so placed that two of them could be printed at once by means of a divided fountain; it nevertheless required in all twenty-three impressions to complete this sheet, each of which called for fairly close register.

Fortunately, few printers are called upon to reproduce the actual pages of this book. Its color areas were required to match the Munsell measurements within the smallest possible margin of error and be so maintained throughout the edition.

In work not intended, as is this, to present color standards for study and comparison, there would be little point in striving for such a degree of accuracy.