A Grammar of Color – Part 7: A Practical Description of the Munsell Color System with Suggestions for its Use: Color Chroma Scale

Here is part 7 of our series of excerpts from the 1921 book, “A Grammar of Color.” In part 6, we began the chapter “A Practical Description of the Munsell Color System With Suggestions For Its Use”, written by T.M. Cleland, where he explained the concepts of Hue, Value and Chroma.

Part 7 is a continuation of this chapter written by Cleland, digging deeper into explaining the scale of Chroma in the color sphere and introducing the term “Color Tree” along with a beautiful illustration of the Color Tree worthy of a picture frame. With each of the three dimensions of color defined, Cleland explans how we now have a complete written color formula which embodies all three dimensions, also known as Munsell color notation.

Stay tuned for part 8, which will continue this chapter with the section on Opposite or Complementary Colors.

A Practical Description of the Munsell Color System with Suggestions for its Use
Section Two: Chroma (continued)

Professor Munsell has devoted a part of his introduction to a description of what he calls “The Color Sphere.” This is a general form which aids the orderly consideration of color and within which all color balances, as will be shown later; but in the aclual measurement of pigment colors, such as we use in printing or painting, all of the paths of Chroma would not be of the same length nor would they all be comprised within a sphere. Certain of them would extend to points outside of it. Nor would all of the paths of Chroma reach their greatest length at the equator of the sphere, that is the level of Middle Value. There are two reasons governing this which it is important to understand: first, Colors differ by nature in their Chroma Strength, some being much more powerful than others. The strongest red pigment used, for example, is twice as powerful as the strongest blue-green pigment and will require a correspondingly greater number of steps on a longer path to reach gray. The Chroma path of Red is the longest and extends far outside the sphere, being ten measured steps from the neutral pole;* while Blue-Green is the shortest, being only five steps. The sphere is limited in size to this shortest axis for reasons which will appear when we take up the question of Balance or harmony of color. The second reason is: That all colors do not reach their maximum Chroma Strength at the same level of Value. It can be readily comprehended, for example, that the strongest yellow pigment is by nature much lighter, or higher in Value, than the strongest blue pigment and, therefore, that the complete Chroma paths of these two colors will each touch the neutral pole at different levels.

*This is the Chroma of vermillion in dry form. Red printing inks are now made which are considerably stronger than ten steps of Chroma. 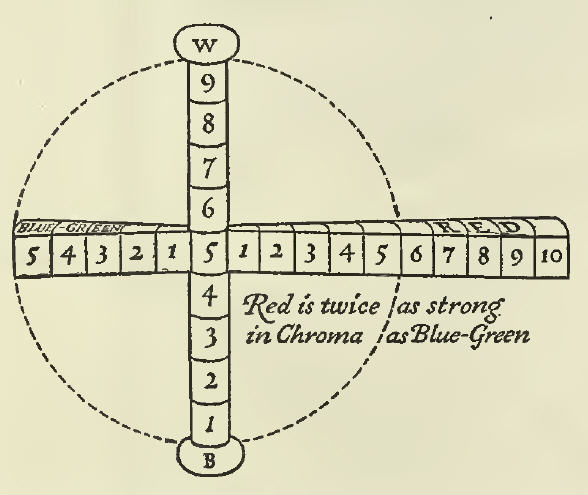 Thus it is evident that a complete image of all pigment colors cannot be comprised within the sphere; and we are led to seek another form which will convey more completely the character of color qualities and dimensions governing the range of pigments in regular use. Professor Munsell has conceived this as a “Color Tree” with a vertical trunk for the scale of Value and branches representing the different Hues, these branches varying in length with the Chroma Strength of each Hue. In the appended illustration the leaves of the tree represent the measured steps of Chroma upon each branch. 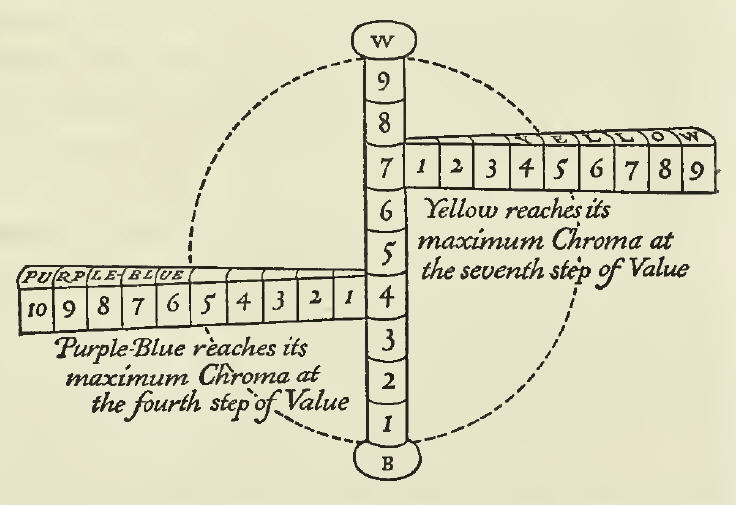 Upon the scale of Chroma the number of steps is limited only by the strength of pigments. The strongest yellow pigment in dry form, for example, will reach nine steps away from the neutral pole; but certain dyes on silk, or even printing inks and some unreliable pigments, may go one or more steps beyond this. As new and more powerful pigments may be discovered, they will add further steps to the scale of Chroma. 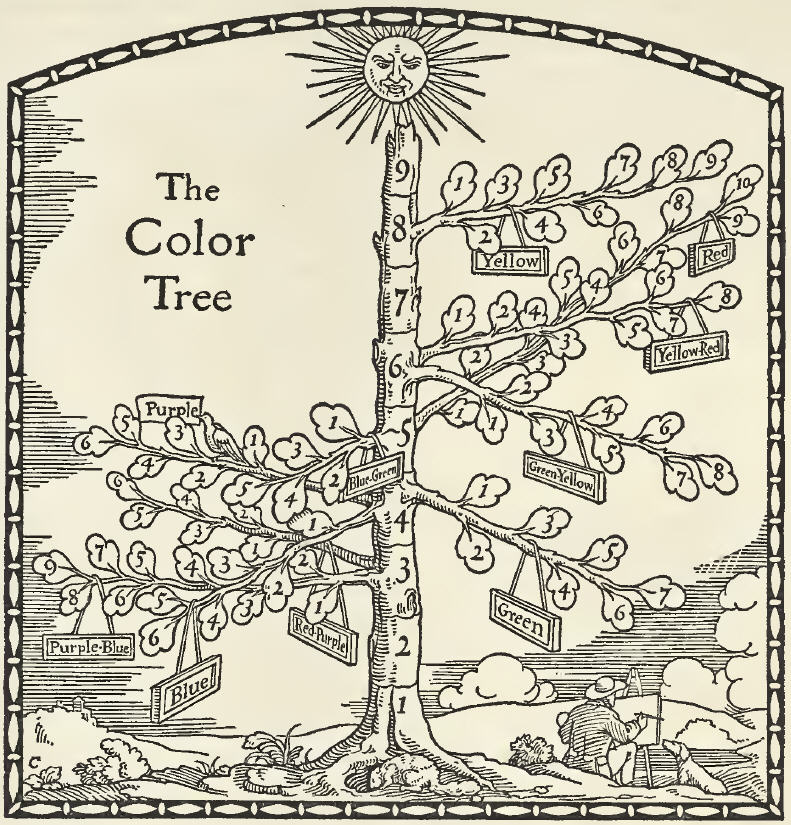 We have described each of the three dimensions by which any color may be measured, and noted how each is written in a color formula. It remains only to put these separate notations together and to write a complete color formula embodying all three dimensions. For example, we are given a certain color to measure and define and we find that upon the scale of Hue it is Purple-Blue. Upon comparing it with the scale of Value, we find it is but three steps from the bottom, and that it is only two steps away from the neutral gray pole upon the scale of Chroma. A complete formula for this color would, therefore, be written P-B 3/2. It is scarcely necessary to point out the practical advantages of such a system of definite measurement and notation over the vague and variable terms in general use, borrowed from the vegetable and animal kingdoms, such as plum, olive, fawn, mouse, etc., of which no two persons ever have quite the same idea.

It is hoped that the foregoing explanation of the three dimensions of color will have been sufficiently clear to convey to the reader a distinct mental image of what is meant by the terms, Hue, Value and Chroma, in order that we may proceed to the study of certain principles of order for the intelligent and harmonious use of color, which grow out of this simple and logical system of measurement.