Color plays an important role for my Agriculture Production students in their ability to communicate and interpret the world around them. It is often the first observation they make when we reflect on our farmscape. The colors of flowers, trees, vegetables and fruit as well as the visiting birds, insects and other critters are first to be mentioned in their nature journals.

Building a soils unit as a first year high school teacher at Renaissance High School, I found it vital to include discussions around the topic of soil color in order to utilize their inherent observational skills.

Having the right tools for the job in order to show students how soil scientists assess and classify soils is crucial when trying to inspire the next generation. Using the Munsell Soil Color Book, my students and I were able to spend the day learning how to identify soil color, just like a soil scientist. 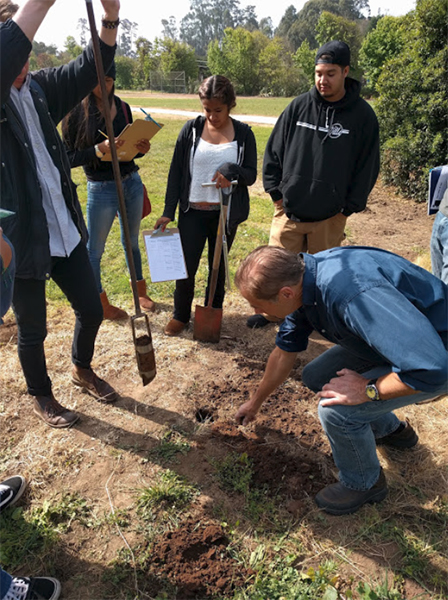 On Tuesday, April 26th, 2016, Rich Casale, District Conservationist of the United States Department of Agriculture (USDA) – Natural Resources Conservation Service (NRCS) in Santa Cruz County came to guide us through a soils color exercise. Rich brought with him 42 years of expertise in soils and natural resource management and was part of the original soil mapping team in the Central Coast of California.

Alongside Rich were Eric Cissna and Ryan Hutchison, two NRCS Earth Team Volunteers that are currently interning with the NRCS Santa Cruz office. They were able to speak to students about their experience studying Environmental Studies at the University of California, Santa Cruz as well as the importance of internships and job experience. 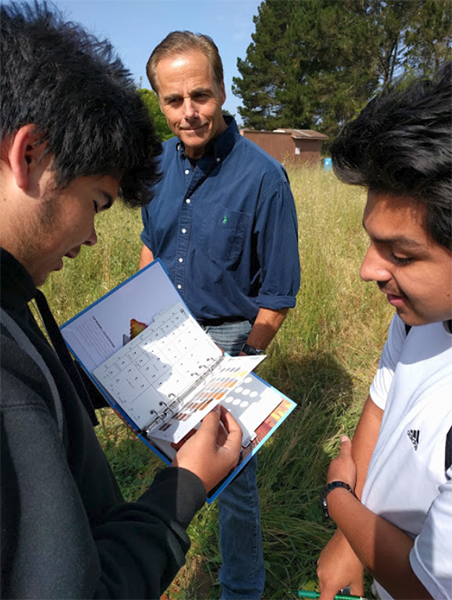 Rich Casale, District Conservationist, USDA/NRCS looks on as students George Iniguez and Luke Ledesma use the Munsell Soil Color Book to identify a ped from one of the soil horizons.

The Job of an Agriculturalist

We started the session in the classroom, looking at the online Web Soil Survey and discussing the importance of soil color in identifying soil characteristics for both our campus soccer field and farm site soils. We showed the students the Munsell Soil Color Book and walked them through its basic use in the field. After we moved outside, and together with my students, the NRCS team used a soil auger to extract 10ft of soil at 1ft intervals. This enabled my students and I to look at each foot of soil and see the gradual change in soil color. 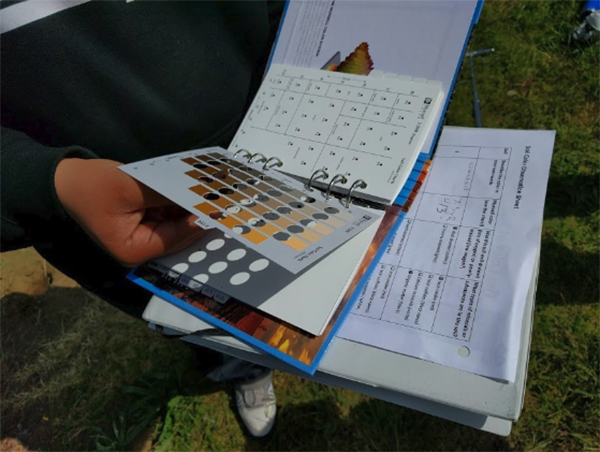 Renaissance High School student using the Munsell Soil Color Book to describe and identify the color of a soil ped.

Each student was able to use the Munsell Soil Color Book to identify the different soil colors in each soil horizon. This expanded their basic familiarity of soil structure and texture and significantly increased their ability to describe soil simply as ‘brown’. The day was a fun success and the students were able to learn by first-hand field experience with professionals and gained valuable knowledge and a better understanding of the job opportunities available in the agricultural industry. 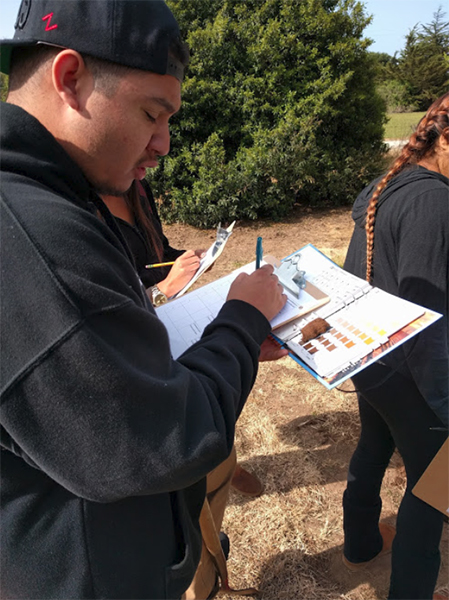 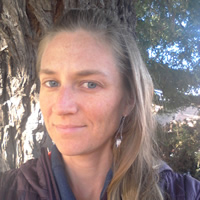 April Jernberg obtained her undergraduate degree from San Jose State University in Environmental Studies and Spanish. She then went on to receive her MA degree from Stanford University in Latin American Studies, Environment and Ecology as well as an MS degree in Agricultural Development, Soil and Plant Sciences from the University of California, Davis. She worked with the NRCS as a Soil Conservationist from 2011 – 2015 and is now a high school teacher at both Renaissance and Natural Bridges High Schools where she teaches Agricultural Production.