Munsell Color Order and the World of Colored Diamonds

While colored diamonds have been cherished throughout time, it wasn’t until the late 1970’s/early 1980’s that they began to capture the gem industry and consumer’s attention. At that time, innovations in diamond cutting, the discovery of a new mine yielding additional quantities of colored diamonds, and high-profile auction sales began to create a stir.

Those interests have only grown and recently culminated in the April 2017 auction sale of a spectacular 59 carat, strongly-colored pink diamond for a record US $71 million dollars.  While colored diamonds have been submitted to the Gemological Institute of America (GIA) for evaluation throughout our history, these diamonds were quite rare and the system for categorizing their colors was very basic.

Color Control for a Complex Form

Recognizing in the 1980’s that change was in the air, GIA began to research ways to enhance its system for grading colored diamonds. With regards to observation variables, we recognized what all of us making color observations already knew: a color would appear different under different viewing conditions, lighting, and angles. Controlling variables was critical for consistent results—especially for an object as visually complex as diamond. Perhaps just as important, we knew we would need to have an armature, an ordering for color that would allow us to understand the relationship between color appearances and, therefore, color categories (grades) and descriptions. GIA staff researched a number of color-order systems and determined some were not compatible when based on colorant behavior or color-mixing laws. Systems based on color appearance were determined to be the best approach for GIA.

Ultimately, we concluded that the Munsell Color Order System was best suited to our purpose. The visually equal spacing and distribution of the system’s color comparators followed the logic of our colored diamond grading system, and we wanted to bring a system into play that was well-documented and widely used. Describing color along three attributes (lightness, chroma, and hue) was also aligned to GIA’s method. Using the Munsell system to illustrate the range and transitions of diamond color has been extremely helpful when educating laboratory clients and the consumer. Already years in the making, in 2006 GIA published a book of color charts illustrating color transitions among some colored diamond colors by reproducing the images of diamonds photographed in our lab (see attached image of pink diamonds in GIA colored diamond chart). We continue to use the Munsell system to complement our work at GIA as we routinely research tools and techniques to improve our grading. 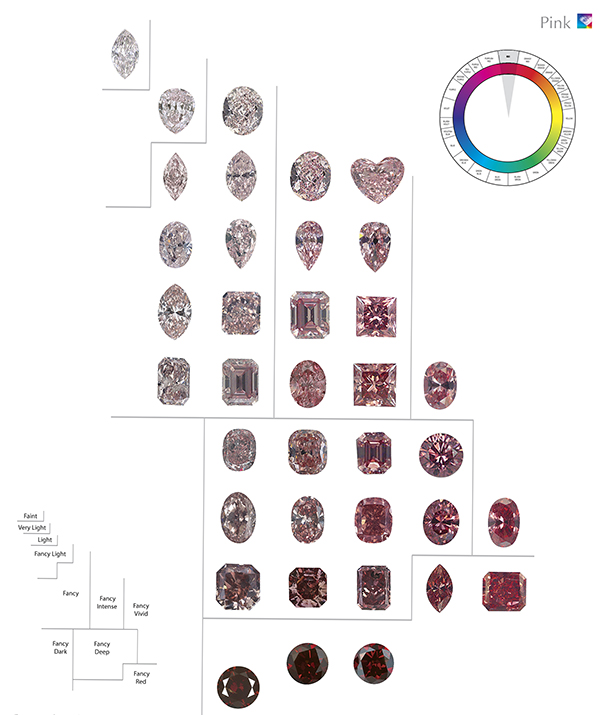 Diamonds in the red hue occur in tones and saturations similar to those in the orangy red and purplish red hues. Again, most of the diamonds represented on this chart would be described as predominantly pink, with the two on the lower right Fancy red. However, this chart also includes examples of very dark colors that would be described as red-brown or reddish brown. The dark tones of these colors might be confused with saturation if not compared to known references.         © 2017 Gemological Institute of America, Inc. All rights reserved.

From Diamonds to Wax

As an artist I feel my sense of color is influenced by colored diamonds as I often use subtle color transitions, translucency, and blending through layers. I paint in encaustic mixing purified beeswax, damar resin, and powdered pigments which lend to the color effects I favor. At the studio I will also use a set of Munsell color comparators as a way to preview color relationships while I mix color. This is a helpful tool and allows me to work efficiently and, at times, find unexpected color combinations.

John King is respected worldwide as an authority on fancy colored diamonds as well as an accomplished artist. He has held his current position as chief quality officer for the Gemological Institute of America since 2008.  Mr. King’s training in fine art included studies in color theory and color naming and order systems which have supplemented his work in the laboratory. His art has been shown in a number of exhibitions throughout the United States and abroad. He received his Bachelor of Fine Arts from Wayne State University, Detroit, Michigan and his Master of Fine Arts from Hunter College, City University of New York.