Rusty Soils in the Boreal Forest

What Marsala Means to an Environmental Consultant

The color Munsell 5R 4/6, as well as many similar reddish colors, often indicate oxidation or rust – the presence of iron oxide – in Boreal Forest soils. The presence of these deep reddish and orangey colors can help environmental consultants determine where the water table sits within a soil. Iron is a common mineral in soils, but it only turns such red colors as a result of a chemical reaction (oxidation) that occurs in the presence of both air and water. Where soils are dry most of the time, the red colour of rusty iron isn’t very obvious, and where soils are continuously flooded, the iron follows a different chemical reaction, and becomes a blue-grey or black color instead. (Think about the conditions that cause a car or pipe or metal fence to rust: it’s usually a really damp spot that goes rusty, but not one that’s 100% under water either.)

Iron in Boreal Forest soils turns red most readily in zones where there is both plenty of oxygen and plenty of water: right at the edge of the water table, or where the water table fluctuates. If soils are full of red, blotchy spots, or “mottles” close to the surface, it is likely that the soils have a highly fluctuating shallow water table. Rusty mottles are a good indicator of seasonally wet soils (e.g. spring flooding). These soils are alternately exposed to flooding and drying, and can be located at the base of a hill with a high water table, or near a water body like a pond, stream, or a wetland like a marsh or a bog.

Sometimes mottles will be clustered around roots in fully wet, pale grey soils. These mottles indicate a plant’s influence in an otherwise wet soil environment. Some plants carry oxygen into their roots, and diffuse that oxygen into the soil as they collect water and other vital nutrients. As a result of this exchange, there are higher concentrations of oxygen around the roots in some wetland soils, and the rusting or oxidation chemical reaction is enhanced simply from the presence of the plants.

Mottles, and the resulting knowledge about the depth to the water table can help environmental consultants assess potential project sites for all kinds of issues including:

In this photo below, you can see the mottles in a rusty, red band near the bottom of the cliff-face (at about shovel blade height, and ranging up to the white and blue sticker-labels on the shovel). This is likely the zone that has the most interaction with water, exposing the iron in these soils to periods of high oxygen and periods of oxygen starvation, resulting in that rusting chemical reaction. (This soil is found on a floodplain, where it is exposed to the influence of a nearby river.) 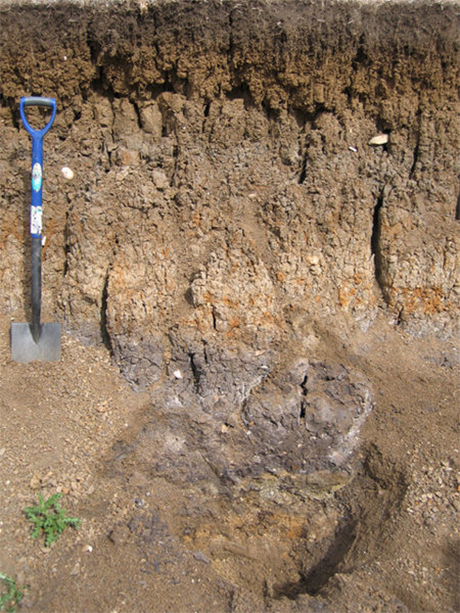 Here’s a great example of the root-related soil mottling in otherwise grey soils: 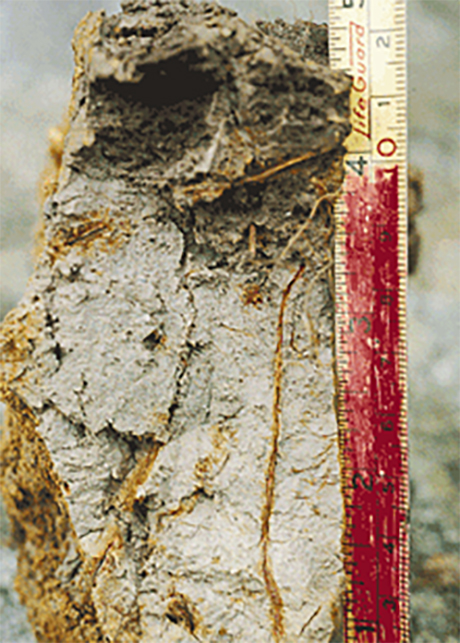 In this photo, you can see mottles formed at depth in a soil. Where it is more permanently wet, the soil is a bluish grey, and where it is more exposed to oxygen (because it is at the upper edge of the water table, or because of the influence of nearby plant roots), it is a rusty reddish color. 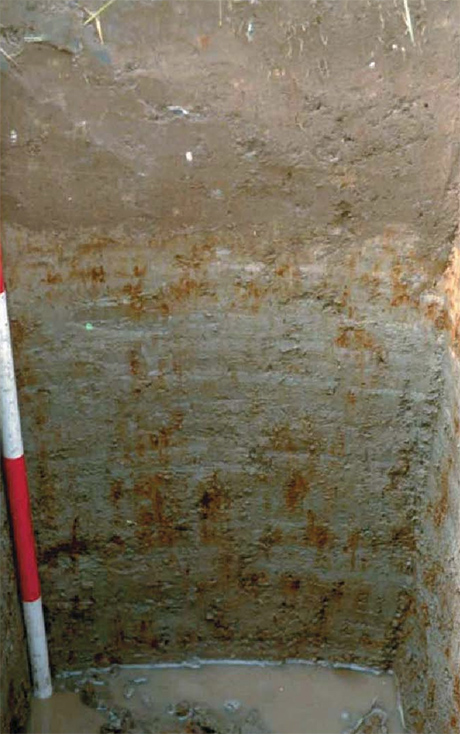 Conveniently, this link includes a tutorial on how to use Munsell soil color charts: http://soils.missouri.edu/tutorial/page7.asp

Alison Borealis is an environmental consultant, knitter, wanderer, and occasional gardener. Her work focuses on sustainability, biodiversity, climate change mitigation, community betterment, and making a positive impact. She is a fervent supporter of public transit, cycling, local businsses and local food and agriculture. You can follower her on Twitter @alisonborealis.