Dr. David Briggs is the author of the website The Dimensions of Colour, and has taught classes in color for artists and designers for fifteen years at institutions including the Julian Ashton Art School and the National Art School, Sydney. In the first of this two part series, he presents his personal view of the importance of the Munsell system in artistic color theory and practice.

Color training in the arts today is deeply divided between modern and “traditional” color theory. Modern color theory characteristically emphasizes concepts of color space, especially the framework of hue, value and chroma devised by the artist and art teacher Albert Munsell. Additionally, modern color theory incorporates the discoveries by which Helmholtz, Maxwell and Hering revolutionized our fundamental understanding of the nature of color as radically as Darwin transformed our understanding of biology at the same time. In contrast, traditional color theory anachronistically maintains conceptions of color that prevailed before these late 19th-early 20th century revolutions, and its relationship (or lack of relationship) to modern color theory is in some ways like that of so-called “Creation Science” to modern biology. 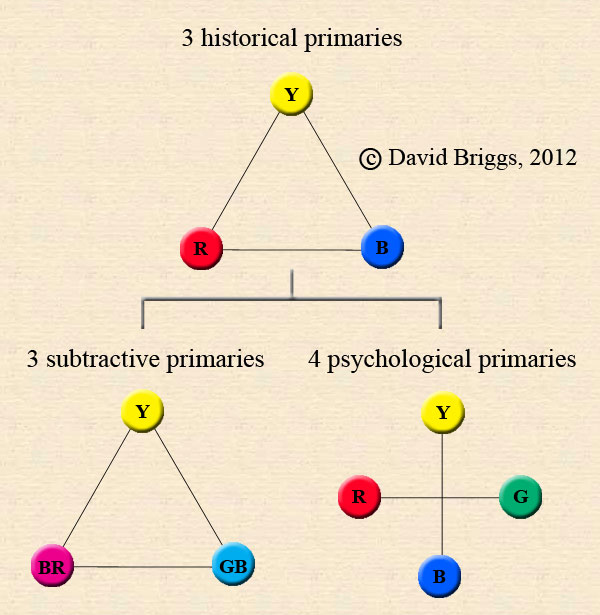 Implicit in much traditional color theory is a pre-Newtonian view of color mixing that I have called the intermixture theory. This view rests on the “commonsense” assumptions that colors are physical properties residing in materials, and that these properties themselves mix when we mix paints, so that, for example, the color green is considered to “contain” yellow and blue. In many minds this view exists in quarantine alongside knowledge of Newton and the spectrum, without any apparent awareness of the inconsistency, as it does for example in Johannes Itten’s (1961) The Art of Color. Other versions of traditional color theory adhere to the later (but still obsolete) idea that color mixing depends on shared “impurities” or “biases” in the yellow, red and blue primaries. This 19th century idea has lately been reanimated as the rationale for a “split primary” palette system consisting of warm and cool versions of the three historical primaries. In modern color theory, color mixing in paints is understood to involve a combination of subtractive and additive-averaging processes that result in broadly predictable mixing paths through hue-value-chroma space. For example, mixing paths of yellow and blue paints tend to curve through low chroma greens, not because green “contains” yellow and blue, but because subtractive mixing exposes the substantial green-wavelength reflectance that is an essential component of the color of both yellow and blue paints.

Stay tuned for Part 2 of Modern and “Traditional” Color Theory by David Briggs.

3 responses to “Modern and “Traditional” Color Theory Part I”