In the summer of 2014, I began a multidisciplinary research project to assess the potential for development of a non-destructive method of assessing the sources of prehistoric stone tools. The problem with existing assessment techniques is that they damage or destroy artifacts. As artifacts are rare and fragile, this is problematic.  The need for this research stems from the fact that knowledge of stone tool source materials and locations can help anthropologists and archaeologists identify prehistoric trade and migration routes, settlement patterns, and other societal and technological details.

As a part of my research, I was patinating (staining) raw lithic material to find out how specific patinas are formed, and to find out if you could identify the original material of a lithic artifact based solely on it’s patina in a non-destructive way.  I used different types of treatments to mimic a variety of environmental conditions: 500 and 300 degree Celsius heat treatments, hydrochloric acid treatment, nitric acid treatment, sodium bicarbonate and sodium hydroxide base treatment. The acids simulated artifact placement in acidic soil (Podzols) and acid rain, the bases simulated placement in basic soil which occurs for a short time after forest fires, and the heat treatments simulated forest fires, and the artifact being placed in a cooking fire. I left the samples in the acid, and base treatments for a week, and the heat treatment samples in a muffle furnace for an hour. 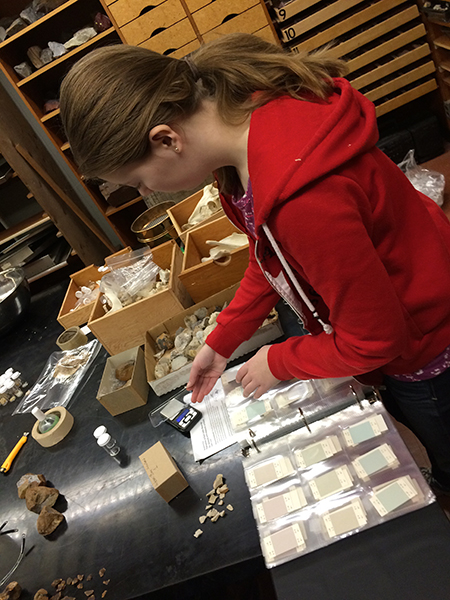 My research ultimately led to three significant discoveries. First, I found out that some originally different lithic materials can be made to look identical when they gain a patina through environmental conditions. This has potentially led to widespread misidentification of prehistoric trade and migration routes due to misidentification of stone tool source locations and types. Second, I discovered the cause of a specific type of naturally-forming patina. “White Taconite”, previously thought to be a specific type of taconite ore, is actually the common Jasper Taconite that has been exposed to acid. Finally, a shiny or “lustrous” patina was always formed on stone tool source materials when they were exposed to animal fats. No other tested patination method formed this patina. While I was unable to develop a non-destructive identification method for prehistoric stone tool source materials, the associated discoveries remained significant. 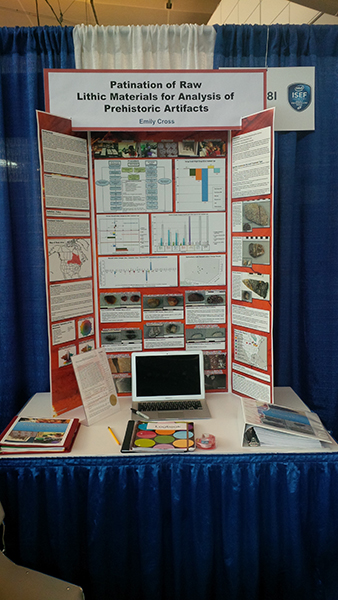 I took my research and results to the Intel International Science and Engineering Fair in Pittsburg Pennsylvania in May 2015 as a member of Youth Science Canada’s Team Canada ISEF 2015. At the fair, my research presentation won the American Geoscience Institute First Place Special Award for all Geosciences, and a Fourth Place Grand award in the larger Earth and Environmental Science category. 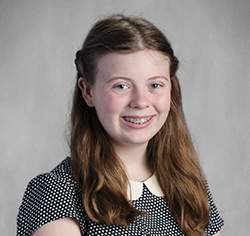 Emily Cross is a Grade 10 student at Hammarskjold High School, in Thunder Bay, Ontario, Canada. With a seven-year history of Earth and Environmental Science research, she has competed in local, regional, national and international science fairs. During this time, she has done multiple science fair projects on the effects of chemicals on ecosystems and the environment. In 2013 her focus shifted to geoscience. She attended the Canada Wide Science Fair twice, winning a Gold Medal in 2014. This year she brought her project to the Intel International Science and Engineering Fair where it won the first place American Geoscience Institute award and 4th Place Earth and Environmental Science Grand Award. For the past two years, she has performed research at Lakehead University thanks to the generous donation of laboratory space, training and mentorship by the department of Anthropology and Archaeology.

She greatly enjoys geology, paleontology, and archaeology and her greatest passion is science. She believes that if you can find something that you are passionate about and interested in, you can accomplish anything. In addition to her research,  she is a mentor for Science, Technology, Engineering and Math for elementary school students, and has recently become a Regional Director for Sustainable Youth Canada.