The term “smoke” can be thought of as the presence of light-obscuring material in an environment’s airspace. The situation that most comes to mind is black smoke, tiny solid particulate material seen in campground fires, barbecue grills, and the occasional consumer firework.

White smoke can be seen as the after effects of many military and commercial explosives and propellants (think of the smoke from rocket liftoff) as well as nebulized and vapor material that has re-condensed in to tiny droplets in the air (fog can be thought of as a kind of smoke).

White and black smoke are interesting and have their uses, but what about colored smokes? Seen in any number of military movies during the heat of battle or in rescue operations, thick colored smokes are a simple and effective way to communicate from a distance, and concurrently obscure the deploying individual from direct visual contact. 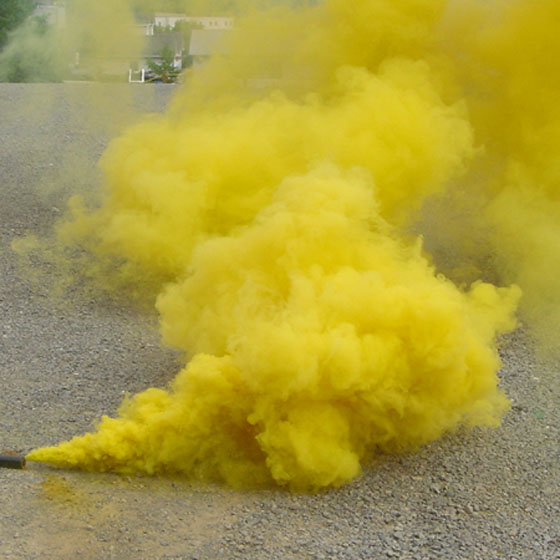 So How is Colored Smoke Made?

To understand how colored smokes are generated, let’s start at water vapor fog already mentioned. Water, in its liquid form, is usually seen as a bulk substance that can be touched and felt directly, even if it doesn’t have an intrinsic shape of its own. (If you think you can’t “feel” water, take up waterskiing or kite surfing, you’ll surely feel it your first time out!) However, when that water is vaporized in to the gaseous state and cools enough in the air to form tiny, microscopic droplets, it becomes what we think of as a “fog” and is not felt as directly as the liquid water. As we know, fog can be quite visually “thick” and prevent seeing very far in to or past it.

In short: A touchable substance is vaporized in to a gas, re-condenses in to tiny droplets or particles in the air, and that mass diffracts and obscures light from passing through. 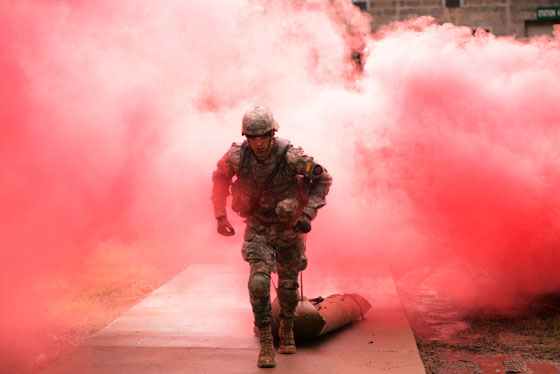 This same process can be done with certain kinds of colored dyes, ones that might be used in the textile industry for clothing, or in the food industry for edible coloring. These solid, powdery dyes are generally organic (carbon-based) molecules that, owing to their molecular structure, absorb certain wavelengths of visible light (we’ll avoid the lengthy physics of that for this post!). When a white-light source (that is, one with all color wavelengths combined together) interacts with the molecules, some of the wavelengths are absorbed, while the rest are reflected. Those wavelengths that are reflected are perceived as “color” by the human eye and no longer white. For example, in the presence of white light, if a molecule absorbs the wavelength associated with red, we might then perceive the material as a green/blue color when the other wavelengths interact with the human eye. 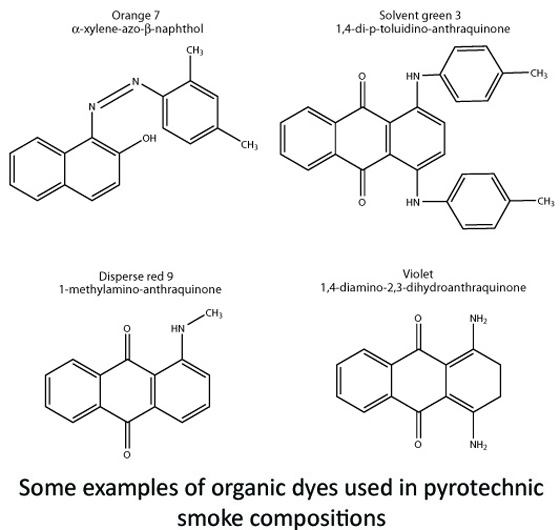 So now that we have our bulk, powdery colored dyes, how do we turn them in to big plumes of smoke? Just like water, we need to vaporize or nebulize the molecules so they can re-condense and solidify in the environmental air. However, unlike water, these dyes have to be treated a little more delicately in relative terms.

In a pyrotechnic composition, we will have our colored dye along with components to heat the dye to volatilization and vaporization. However, if we get things too hot, the dye will just burn like any other material and we’ll get wispy black smoke, if anything at all. So there are some specific requirements for a pyrotechnic composition to create colored smoke:

Luckily, for the pyrotechnician, the use of potassium chlorate (KClO3) as an oxidizer with simple organic fuels like sucrose or lactose ignites relatively easily, burns evenly at a good temperature to vaporize the dye without burning it, and generates carbon dioxide and water-vapor gasses at good rates to disperse the dye in to the air. If moderation of the burn rate is needed, the pyrotechnician can add sodium bicarbonate (NaHCO3) or magnesium carbonate (MgCO3), both of which will readily soak up heat as they decompose to carbon dioxide and oxidized solids, taking away excess heat that might harm the process. 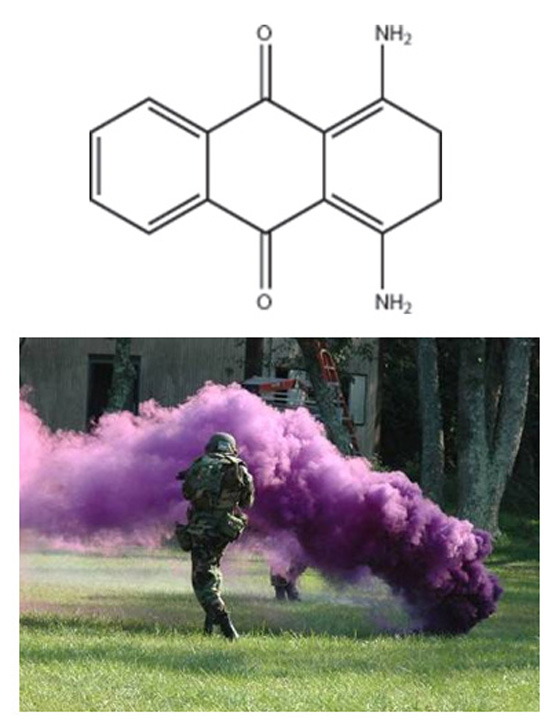 A decent composition might include an organic fuel such as sucrose that doesn’t burn too hot, an oxidizer such as potassium chlorate, magnesium carbonate as a moderator, and a good amount of organic dye for the colored smoke. Upon burning, the fuel and oxidizer will react to create heat, some of which is “soaked up” by the magnesium carbonate, but enough of the heat will quickly vaporize the dye briefly in to a gaseous state and is pushed out of the way as other gases (such as carbon dioxide) are also quickly generated. Because we don’t want to ignite and burn the dye (destroying its colored appearance), these compositions are often confined in a canister so the loose material isn’t allowed to react faster.

As these volatilized dyes are vaporized and pushed in to the atmosphere, they spread out and cool again to tiny droplets or particles in the air. But they still maintain their colored appearance and ability to block light transmission, creating brilliant plumes of colored smoke.