My dog, Truffle (who has been introduced elsewhere), is red-green colorblind. He has a devil of a time at traffic lights. I don’t let him drive that much. He can never remember whether the red light is the one on top or the green one. And he thinks he is the better driver?  I’m the one who can always remember that the green light is the one on top!

Most mammals are what we would call colorblind. They have two types of cones – that is, color sensors – in their eyes and we have three. They have cones that respond to blue light and cones that respond to a broad band of wavelength that is centered in the green range. We are far superior creatures, since we have a third cone. This third cone is commonly called the red cone, although there is a lot of overlap with the green cone.

The theory of evolution can be stated rather simply. Mutations occur randomly and sporadically. If they increase the number of kids and grand-kids, they stick. For example, it is clear from the huge number of applied mathematicians around that applied mathematicians are enormously successful at attracting mates, and hence have lots of kids and grand-kids.

For some reason, in the short course of evolution from Truffle to me, trichromacy (having three types of cones) stuck. Not only do I have an opposable thumb [2] to open Kool-Aid packets, but I can tell the difference between red Kool-Aid and green Kool-Aid just by looking at it [3]. Most primates have that third cone. Other than primates, most mammals do not. 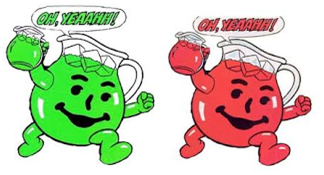 “Oh yeah, Koolaid’s here, bringing you fun. Koolaid’s got thirst on the run…”

Although trichromatic vision may sound like an upgrade that is easily justified, it does come with a cost. First, there is a loss of visual acuity – making room for extra cones give up pixels reduces the number of megapixels in our cameras.

Second, and perhaps not so obvious, is that adding extra cones can reduce the efficiency of an eye. If a cone is only sensitive to red light, it will ignore other colors, in effect wasting those photons. When it’s late at night, you don’t want to be getting photons wasted, lemme tell you [4]. 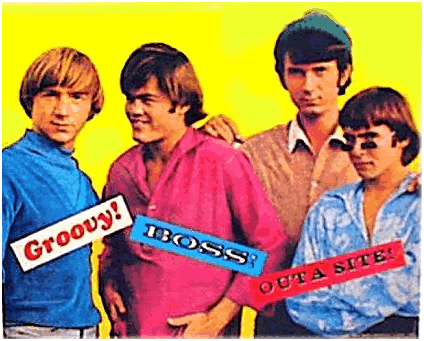 Some typical trichromats who are outa sight

The classical explanation for trichromacy is that a primate can use this superior color vision to tell when fruits are ripe. The first thing that comes to mind is the red/green apple. To illustrate this, I have two pictures of a ripe and a green apple [5]. The top one was taken through my eyes. The bottom one was taken through Truffle’s eye 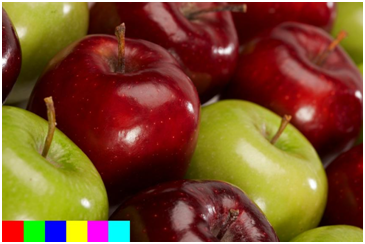 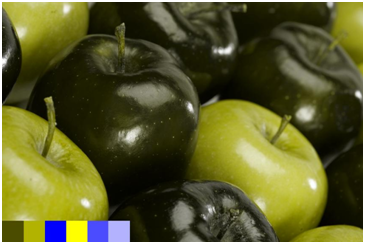 Apples as seen by me, and by my dogs

Clearly, my dog can tell when an apple is ripe. This surprised me. I guess I never stopped to think about it before. All these years, I have been telling people that the red cone means I can pick out apples. Go figger.

Why is this? We can think of light as coming in three flavors: red, green, and blue. The red apples are red because we are seeing the red light that reflects from it. Because they are a nice rich red color, they are reflecting very little green light. Since dogs can’t perceive red light, the red apple looks dark, almost black.

How about the green apples? They are clearly reflecting a predominance of green light, but also a little red and a bit of blue. Thus, there is a big difference for my dog between a red and a green apple. The red apple reflects much less green.

This kind of dispels the theory that trichromats make better cotton-picking apple pickers. 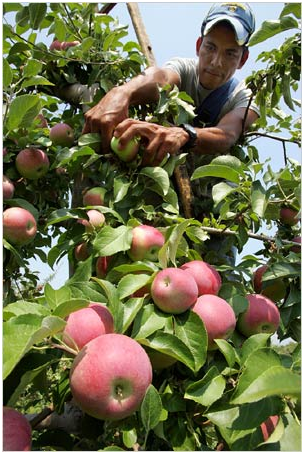 Maybe my dog should apply for this job?

Let’s have a look at some other possible ripe / not ripe fruits [6]. Monkeys are always eating bananas, and primates have trichromacy, right? Therefore, bananas must be primates. Does trichromacy help a primate distinguish ripe bananas from green ones?

Bananas as viewed by me and by my dog

Ahhh… Remind me not to send Truffle to the store to pick out bananas. Maybe he could tell the difference, but he probably wouldn’t be careful enough. He might come home with hard green bananas that leave a bitter aftertaste (which my wife likes) or soft, juicy, sweet delectable bananas for me.

Can Truffle be trusted to pick black raspberries? Based on the images below, I am thinking he could tell the difference if he were to concentrate real hard, but the difference is subtle. Truffle is not known for being terribly careful. 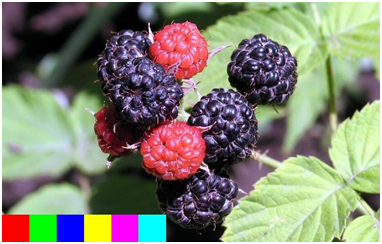 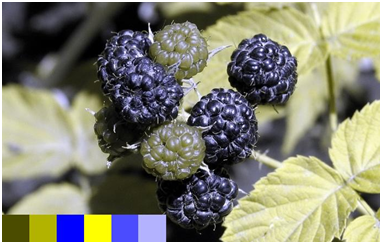 Black raspberries as seen by me, and by my dog

This next one is rather telling. The brilliant hues of fall colors are totally lost on Truffle. That really explains a lot. 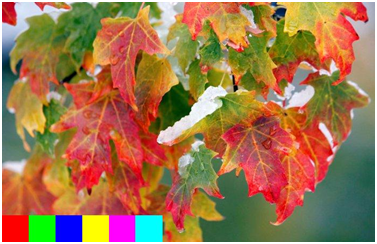 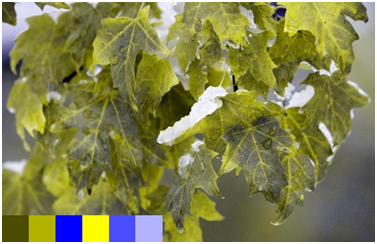 This shows that trichromacy is a useful adaptation for any folivorous (leaf-eating) species. The third cone clearly allows a folivore to distinguish leaves that are green and succulent from leaves that are dried up and ready to fall. Frugivores (who eat fruit) also benefit from trichromacy, but not as much.

I recently read a book that offered an alternate explanation for why us people have more cones than dogs. Ok, honest truth? I didn’t read the whole book. Just most of it. Ok, I skimmed it. Alright, alright!  Truffle read it and gave me a quick summary.

The book has the title The Vision Revolution: How the Latest Research Overturns Everything We Thought We Knew About Human Vision, by Mark Changizi. Someday I hope to be able to write a book with a title that long.

His thesis is pretty simple, really. And if I would have thought of it, I would say the idea is clever as well. Humans, and many primates, are social animals. Well, except for applied mathematicians. Humans and most primates (again with the exception of exceptional applied mathematicians), don’t have a lot of fur on their faces. 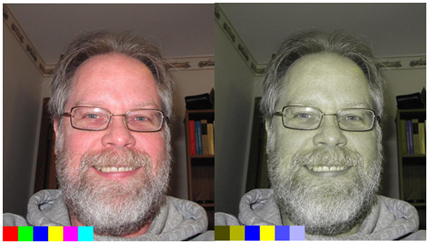 One example of a primate with a furry face

Primates, being social animals, communicate with their faces. By observing another primate’s rubicundity, something about that animal’s emotional state can be ascertained. If the animal has a red face, they are in a heightened state – possibly angry, possibly interested in going to look for bananas. If the face is a bit bluer, then you could guess that the animal is suffering from an aneurysm. Clearly there is an evolutionary advantage for a primate who knows when to dial 911. Is the primate’s face ashen color? It might be time to turn off the reality TV shows and get that fellow out in the sun.

I set out to test this theory, but unfortunately was stymied in my efforts. I wanted to catch photos of people first under normal conditions, and then while flushed. I would then take the images, and process them in the same way as the previous images, to see if flushing is readily apparent to a trichromat and obscure to a dichromat.

I erred somewhere in my experimental design. I discovered that my comments potentiated me getting my face slapped, and, in the last instance, it potentiated my camera being smashed on the floor. I calmly drank my last shot of Jägermeister, and concluded my critical research for the night.

My determination of the validity of Changizi’s theory will have to wait until I get another camera.

[1] My town growing up was so small that we had only one stop and go light. It used to be a four way stop, but people kept getting stuck there. If four people reached the intersection at the same time, someone had to call the local cop to come and decide who should go through first. People in my home town were very polite.

[2] Truffle gets livid when I taunt him with my opposable thumb. He just can’t deal with my genetic superiority.

[3] Whether I can tell the difference between red and green Kool-Aid by taste alone is another question altogether. I maintain that if you close your eyes, they will taste the same. Only when you open your eyes can you “taste” a difference. I have actually performed this experiment with sugar wafer cookies. You know, the kind that come in “chocolate”, “vanilla”, and “strawberry”? When blindfolded, kids can’t tell the difference. 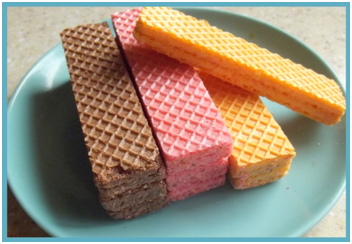 But an orange mug does make hot chocolate taste better.

[4] Does this bit of silliness remind anyone of the last time I used that “drunk photons” shtick?

[5] I contemplated hooking tiny electrodes up to Truffle’s optic nerve in order to get an actual image from his eyes, but the cables were back-ordered from Cables-2-Go. I decided on approximating the effect. The dog-vision-simulated images were all created by taking a weighted average of the red and green channels from camera images, and putting that in the red and green planes of the image. Why did I add in a little of the red channel? The green channel of an RGB camera is narrower than the corresponding channel in mammalian eyes. The “true” green channel incorporates a bit more of the red. I don’t claim that any extensive research went into making these images.

[6] As I wrote that, I was looking for a word that means “not ripe”. My dictionary lists “green” as the only antonym for ripe. Go figger.

John Seymour (AKA John the Math Guy) is an applied mathematician and color scientist. In the 21 years he has worked for QuadTech, he has been granted 17 patents on devices for measuring color and for controlling color on printing presses. His weekly blog, described as “applied math and color science with a liberal sprinkling of goofy humor”, can be found at JohnTheMathGuy.blogspot.com.