Directions for the Use of the Charts: Munsell Book of Color Pocket Edition

This text is an insert from the first volume of the Munsell Book of Color Pocket Edition from 1942, and outlines the use of the color charts. A pocket-sized adaptation of the original Book of Color, it was intended to be used in the field for color designers and other color experts, who needed to be able to identify and communicate color on the spot.

The Munsell Book of Color provides an orderly arrangement of standard papers which serve as guides for the measurement and notation of all colors. These standards represent equally spaced divisions of the three attributes of color known in the Munsell System of Color Notation as HUE, VALUE and CHROMA. 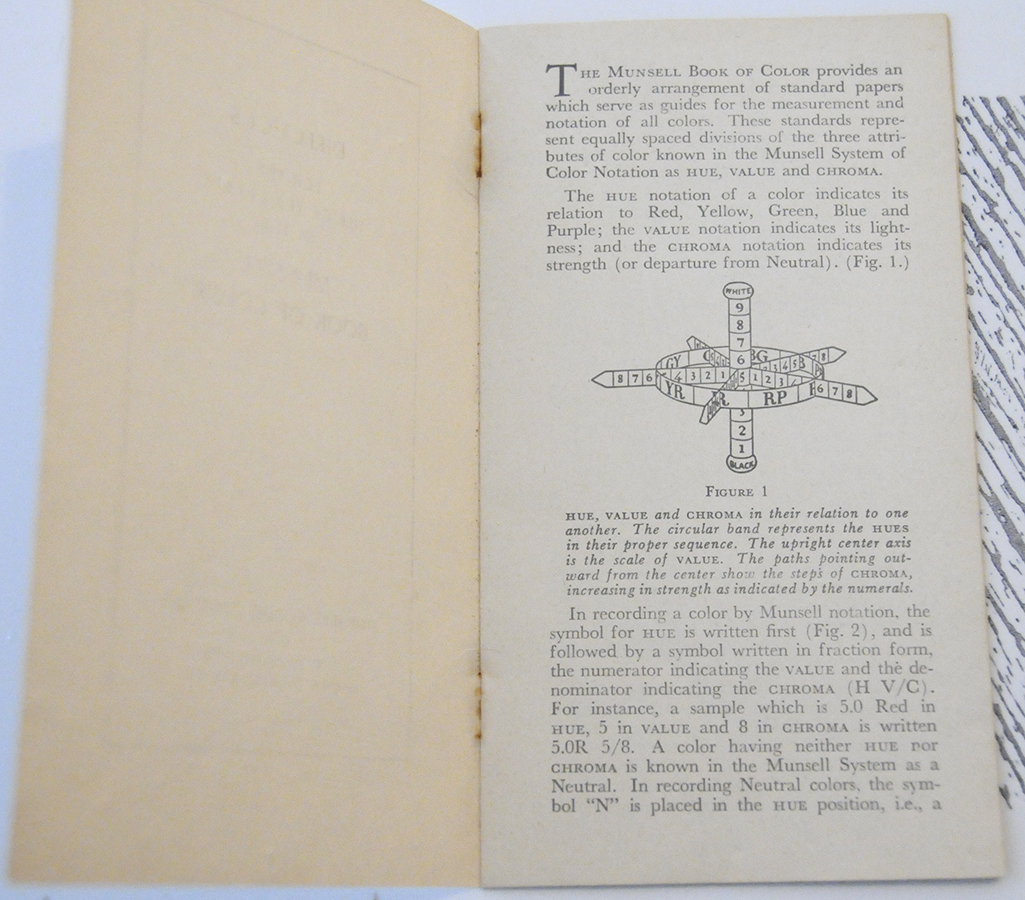 FIGURE 1: HUE, VALUE and CHROMA in their relation to one another. The circular band represents the HUES in their proper sequence. The upright center axis is the scale of VALUE. The paths pointing outward from the center show the steps of CHROMA, increasing in strength as indicated by the numerals.

In recording a color by Munsell notation, the symbol for HUE is written first (Fig. 2), and is followed by a symbol written in fraction form, the numerator indicating the VALUE and the denominator indicating the CHROMA (H V/C). For instance, a sample which is 5.0 Red in HUE, 5 in VALUE and 8 in CHROMA is written 5.0R. A color having neither HUE nor CHROMA is known in the Munsell System as a Neutral. In recording Neutral colors, the symbol “N” is placed in the HUE position, i.e., a Neutral sample which is 5 in VALUE is written N 5/0. 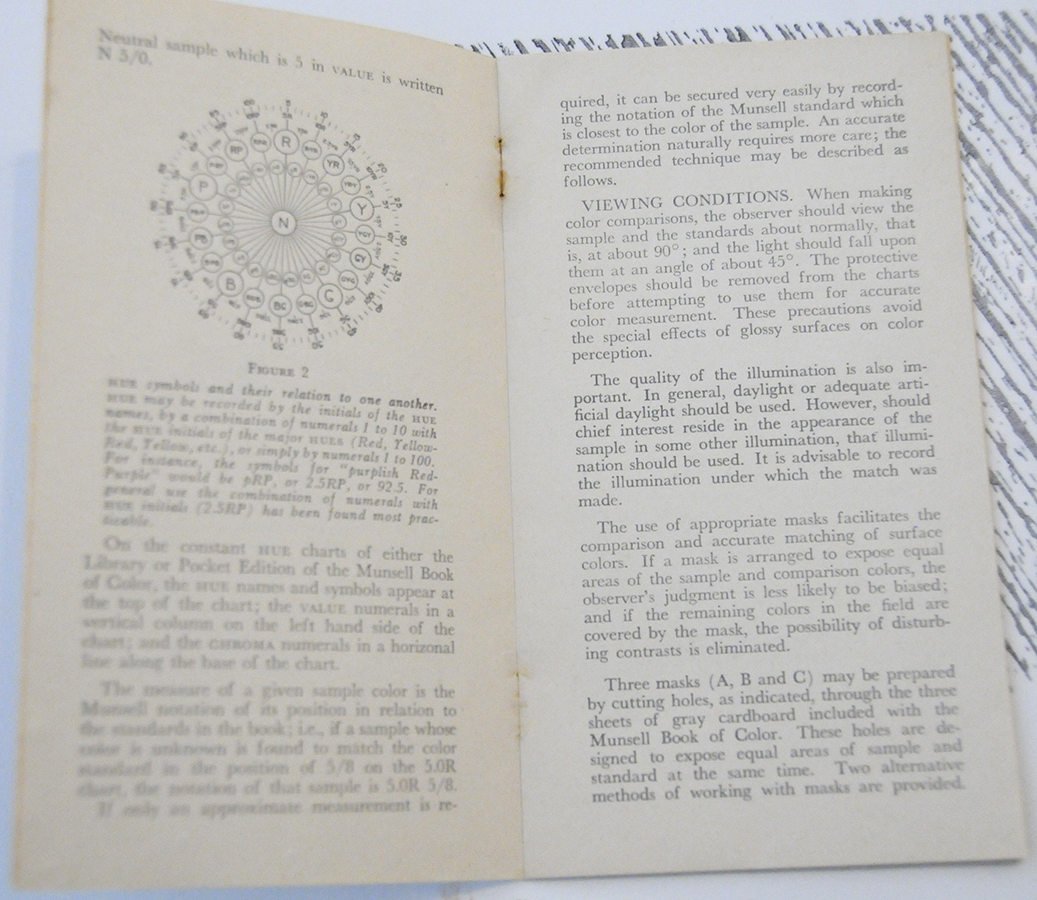 FIGURE 2: HUE symbols and their relation to one another. HUE may be recorded by the initials of the HUE names, by a combination of numeral 1 to 10 with Red, Yellow, etc.), or simply by numerals 1 to 100. For instance, the symbols for “purplish Red-Purple” would be pRP, or 2.5RP, or 92.5. For general use, the combination of numerals with HUE initials (2.5RP) has been found most practicable.

The measure of a given sample color is the Munsell notation of its position in relation to the standards in the book; i.e., if a sample whose color is unknown is found to match the color standard in the position of, on the 5.0R chart, the position of that sample is 5.0R. If only the approximate measurement is required, it can be secured very easily by recording the notation of the Munsell standard which is closest to the color of the sample. An accurate determination naturally requires more care; the recommended technique may be described as follows.

When making color comparisons, the observer should view the sample and the standards about normally, that is, at about 90°; and the light should fall upon them at an angle of about 45°. The protective envelopes should be removed from the charts before attempting to use them for accurate color measurement. These precautions avoid the special effects of glossy surfaces on color perception.

The use of appropriate masks facilitates the comparison and accurate matching of surface colors. If a mast is arranged to expose equal areas of the sample and comparison colors, the observer’s judgment is less likely to be biased; and if the remaining colors in the field are covered by the mask, the possibility of disturbing contrasts is eliminated.

Three masks (A, B and C) may be prepared by cutting holes, as indicated, through the three sheets of gray cardboard included with the Munsell Book of Color pocket edition. These holes are designed to expose equal areas of sample and standard at the same time. Two alternative methods of working with masks are provided. 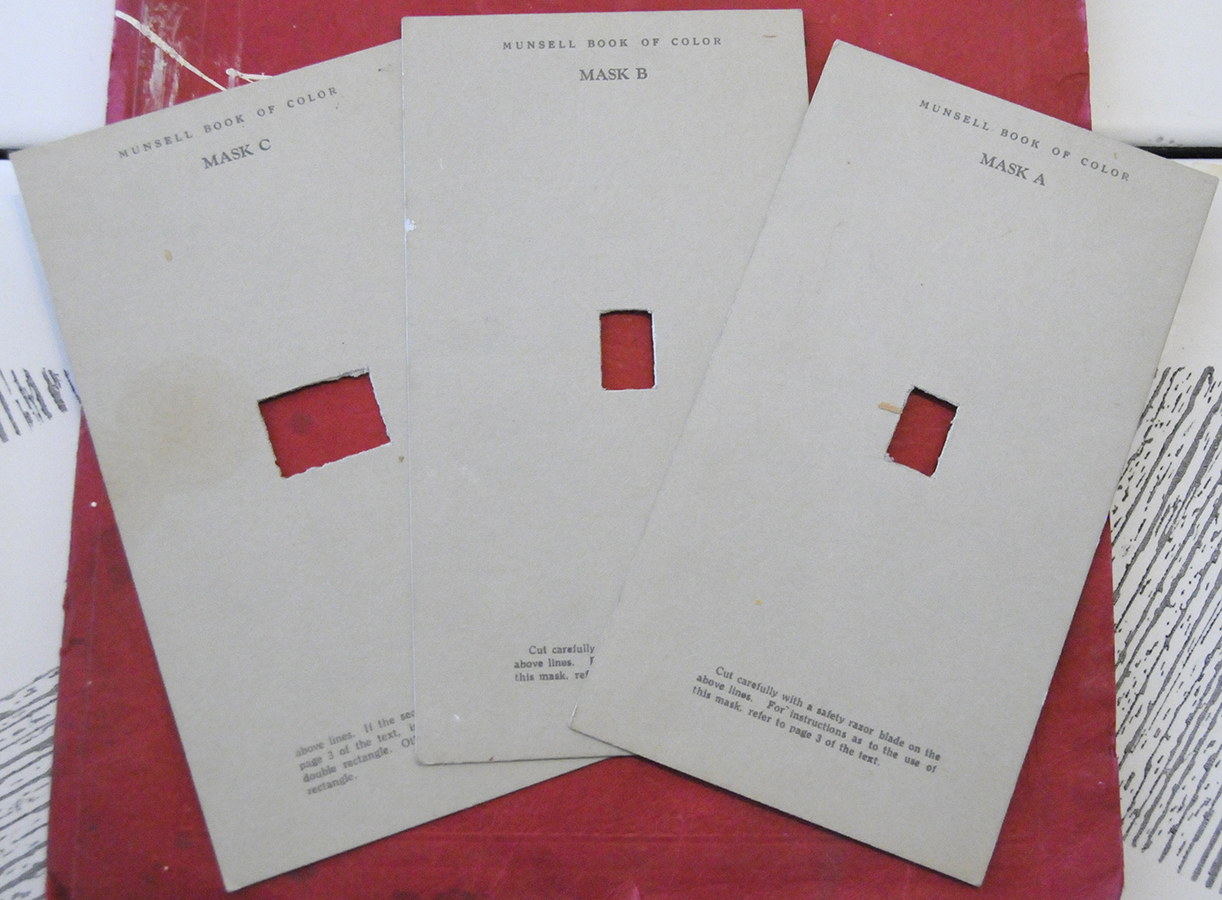 In one case mask B is used to cover the sample so that an area equal in size to the color rectangles is visible through the hole. By placing mask A successively over the colors on the chart, the color most nearly matching the sample may be located.

In the second case the sample is placed behind the mask C so that it occupies one-half of the hole. The mask is then moved over the color chart so that the other half of the hole is occupied successively by the charted color chips until most nearly matching color is located. In this way sample and standard are directly adjacent to each other.

If the HUE of a sample is between two charts, a mask is placed over each chart and a third mask of the sample.

If a given sample matches satisfactorily in all three attributes some one of the Munsell standards, there is no further problem and its notation can be recorded at once. Often, however, a sample does not match any one of the charted colors, but falls somewhere between them; the problem becomes that of comparing the sample with neighboring Munsell colors in order to establish HUE, VALUE and CHROMA, and the procedure is as follows.

Turn to the HUE chart displaying the standard which most nearly match the sample. If the HUE of the sample does not match exactly the HUE of the comparison standard, but lies between it and a standard on a neighboring chart, detach the two charts, lay them side by side, and estimate the HUE position of the sample in relation to the two standards. Since neighboring HUE charts are a known number of HUE steps apart (2.5 or 5 steps, depending upon which edition is in use), the result may be recorded in terms of HUE steps. 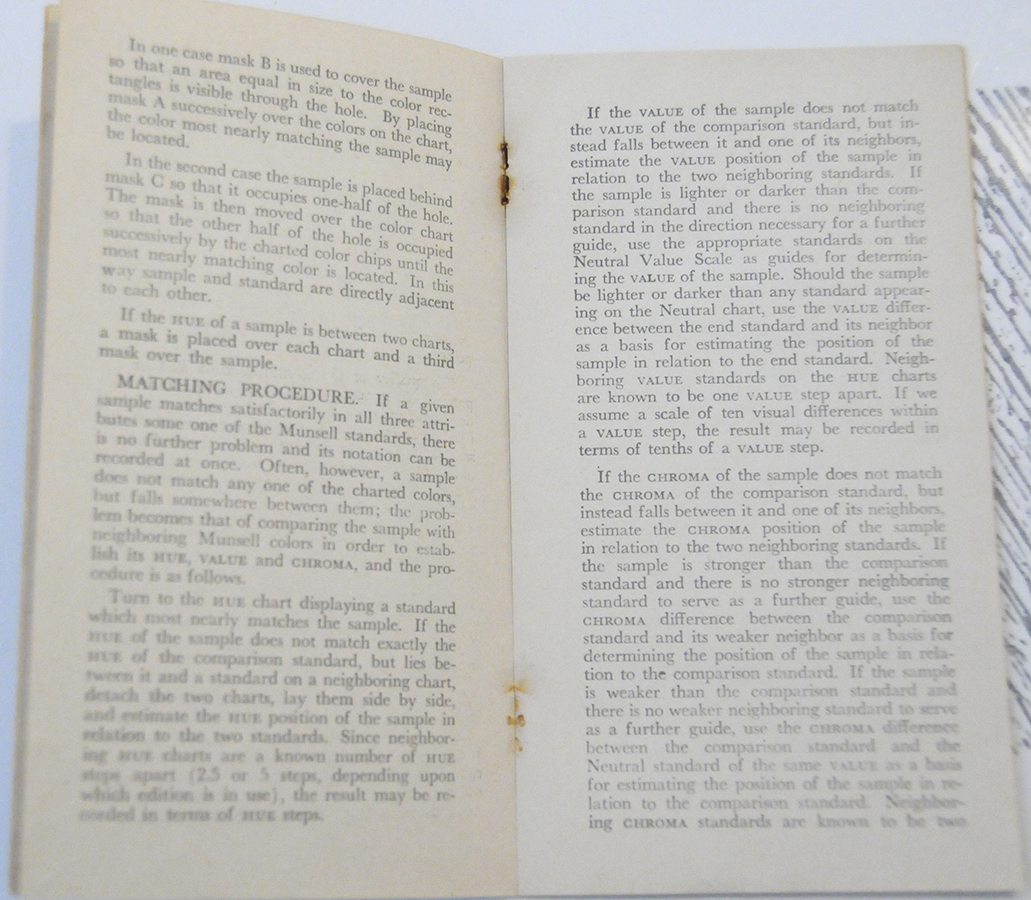 Let us assume that 5.0R 5/8 is the standard in the book which most nearly matches the color of our sample.

Combining the HUE, VALUE and CHROMA determinations, the complete notation of the illustrative sample is 6.0R 5.2/8.8.

The Munsell Book of Color by its very arrangement of colors in their relation to each other suggests a variety of harmonious combinations. Dogmatic rules for color harmony tend to suppress originality and are therefore avoided by most artists. However, the beginner in the field of color design often feels the need of fundamental guides by which he may develop and judge his color selection. It is for the beginner that the following suggestions are offered.

A good deal of literature has been published on the application of the Munsell System and its representative standards to color arrangement. One of the most outstanding and extensive publications of recent years is “The Art of Color and Design,” by Maitland Graves. Earlier and more elementary publications which have proved most popular are “A Practical Description of the Munsell System,” by T.M. Cleland, and “A Color Notation,” by A.H. Munsell. 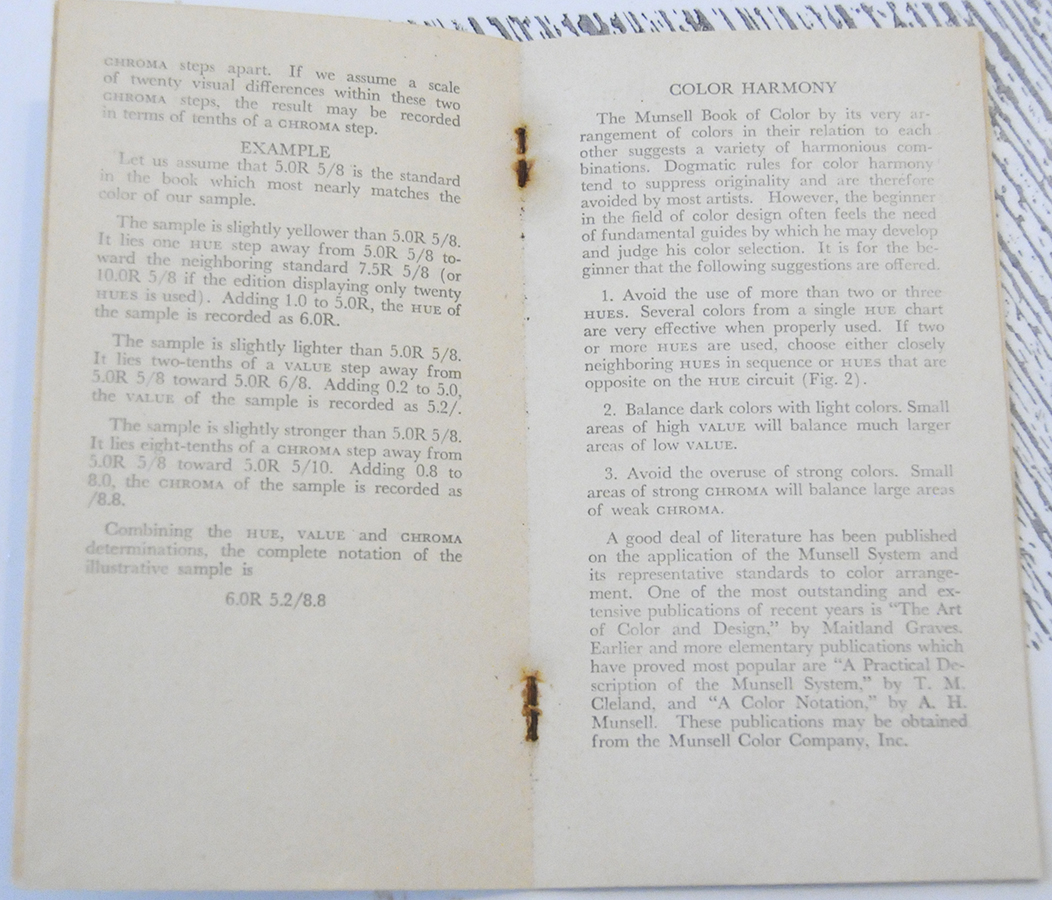 Spectrophotometric measurements have been made of all Munsell Color Standards. The colors of twenty charts (principal and first and second intermediates) were measured by J.J. Glenn and J.T. Killian in 1935, and the I.C.I. tristimulus values, trilinear coordinates, dominant wavelengths and purity for I.C.I. illuminant C were published in the December, 1940, Journal of the Optical Society.

Measurements of these same standards were made at the National Bureau of Standards, and data for illuminants, C.A. Macbeth 7500° K, and clear blue sky appear in the paper “Tristimulus Specifications of the Munsell Book of Color from Spectrophotometric Measurements,” by K.L. Kelly, K.S. Gibson and D. Nickerson, published in the July, 1943, J.O.S.A.

Measurements of the third intermediate HUES very made by cooperation between the laboratories of the Interchemical Corporation and the Agricultural Marketing Administration. These data appear in the paper “Trichromatic Specifications for Intermediate and Special Colors of the Munsell System,” by W.C. Granville, D. Nickerson and C.E. Foss, published in the July, 1943, J.O.S.A.

An Inter-Society Color Council Symposium on “Color in Art Education” was published in the December, 1942, J.O.S.A. This symposium includes “Color Order Systems: Munsell and Ostwald,” by M.E. Bond and D. Nickerson, in addition to other papers of interest in the art education field.

2 responses to “Directions for the Use of the Charts: Munsell Book of Color Pocket Edition”