Archaeologists tend to be more familiar with soils and sediments than most people, especially geoarchaeologists such as myself – we specialize in the study of soils and sediments in order to understand how archaeological sites and monuments are formed. Sediments and soils are not all alike; look closely and you’ll find a wide range of textures and colors all of which can help unlock details about the past.

Over the last year, as part of a team of researchers at the University of Reading, UK, I have been investigating the makeup of ancient artificial mounds in England. Our sites, all former castle mottes (a kind of artificial mound on top of which a defensive tower was built) are usually thought to date to the 11th century AD, but recent work at one such castle motte in Marlborough, Wiltshire, has called this into question… Radiocarbon dating of fragments of charcoal recovered in core samples taken from the Marlborough mound found that this former castle motte had originated in the Late Neolithic – the mound was already several millennia old by the time the Normans built their castle on it! There are over 900 other mottes scattered across England; how many more of these might turn out to be reused prehistoric monuments? Our research project aims to find out.

By studying core samples of the sediment incorporated into these large mounds we can begin to answer key questions: what the local environment was like when the mound was built, where people quarried the material to build the mounds, and crucially, when. Of all the various properties of the sediment, color is one of the key indicators we use to begin to unlock these research questions. 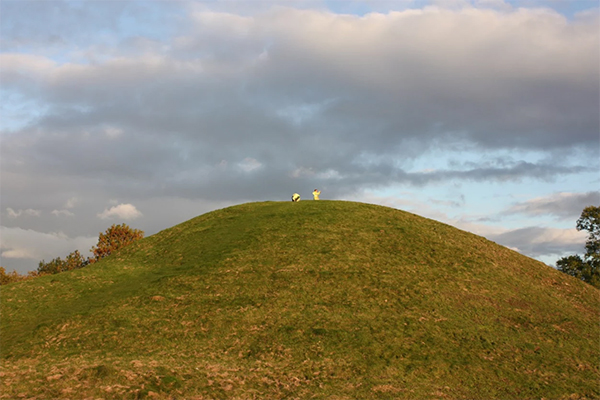 At each of our 20 study sites, we collect cores of sediment taken from the top of each mound using a hand-held power auger drill. The sediments are then recovered sealed in meter-long plastic tubes, which are then taken back to the laboratory for further study. Back in the lab, the cores are sawed open and the exposed face of the sediments is cleaned to expose the fine detail: the grain size and texture of each layer is recorded, and the color is carefully noted using a Munsell Soil Color Chart. Subtle variations in color often provide the first clues to the origin and history of the material –changes in color might reflect the use of different bedrock material in different layers used in the construction of the mound. The identification of organic-rich layers or buried former land surfaces, often indicated by darker brownish or greyish colors are a particular focus as these are then targeted for further analysis to recover any preserved plant remains, charcoal, or any other material suitable for radiocarbon dating.

Figure 2 A possible buried soil horizon and a layer rich in charred wood fragments at the bottom of the motte of Bramber Castle, Sussex. The majority of the mound is made from local chalk, seen on the right.

Figure 3 Contrasting colours in layers within a core from Brinklow Castle.

Color in the Mounds

If, as hypothesized, some castle mottes turn out to be reused prehistoric monuments we may need to totally rethink our interpretation of the function and meaning of these mounds. Finding out about the construction methods, and understanding how these mounds would have looked when newly built might give us important clues in forming these new interpretations. It may also be that particular construction materials might have been selected due to their color – now all the mounds are covered in vegetation and it is difficult to imagine how they would have looked when freshly made. Some mounds, such as the motte at Berkhamsted Castle, Hertfordshire, might have been dazzling white when first built (the mound is largely made up of white chalk and very pale chalky clay); perhaps a faint memory of this is echoed in the name of the road adjacent to the castle “White Hill”. 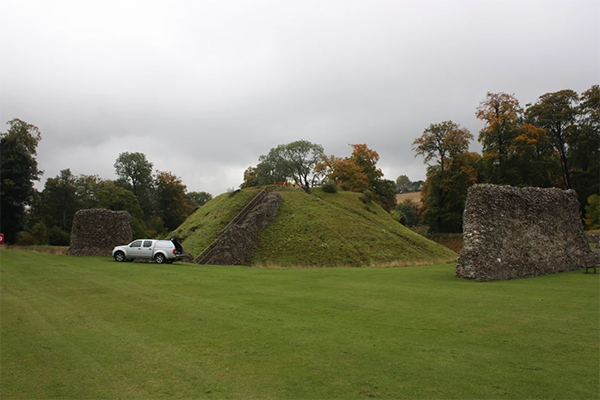 In autumn 2015 we collected cores from ten castle mounds, with another ten to go in 2016. Laboratory analysis is still in its early stages, but careful examination of the varying colors of the sediments that make up these enigmatic monuments is helping identify where to focus our analysis. We expect the first set of radiocarbon dates to arrive in the coming months! 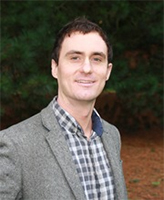 Dr Phil Stastney is a geoarchaeologist and environmental archaeologist at the University of Reading, UK. Phil is currently working on a 2.5 year long research project, funded by the Leverhulme Trust and led by Dr Jim Leary entitled “Extending Histories: from medieval mottes to prehistoric round mounds”; see the Round Mounds Project blog for updates on progress. Previously Phil has conducted research on the archaeology of peat bogs in Ireland as well as excavating on a wide range of archaeological sites across southern England.