We recently received this question from a visualization major…

We use the New Munsell Student Color Set in our color theory course. In the chapter about color harmony, Munsell shows us a few 3-dimensional theories to create a balanced color palette, but unlike the other types of harmonious color balance, no examples are provided. Have these theories, such as the conical spiral, been made into compositions and palettes before? We asked Theresa-Marie Rhyne, an expert in the field, to give the answer.

When Albert Henry Munsell set out to create his color space in 1898, he was seeking a
system that had a meaningful notation of color that stepped beyond the use of color
names that he determined to be misleading. He organized colors by defining the
concepts of hue, value and chroma for an individual color, In Figure #1, we show a
diagram of the Hue, Value and Chroma attributes, adapted from Munsell’s original work. 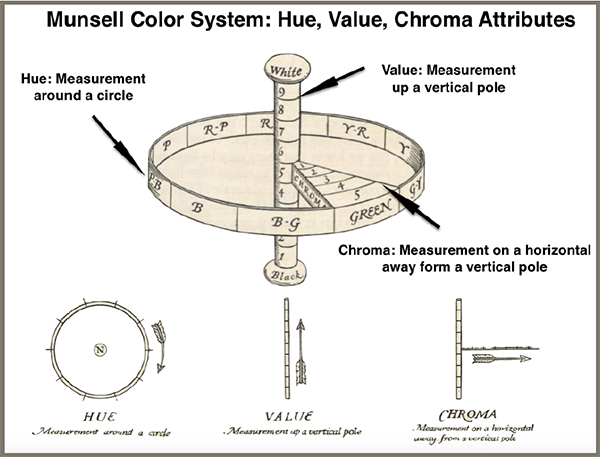 It was Munsell’s hope that a three dimensional sphere could be developed from these
three attributes that would allow for cross sections that could be used in various ways
such as color harmony explorations. Munsell was able to create visually uniform
distances between colors due to his extensive testing of the human visual response to
color. Unfortunately, his studies indicated that it was not possible to create a three
dimensional color sphere due to unequal numbers of chroma values among hues. As
shown in Figure #2, one hue might have a total of 18 chroma values, while another
might have 6. As a result, Munsell abandoned the three dimensional sphere concept for
a Munsell Color Tree concept. 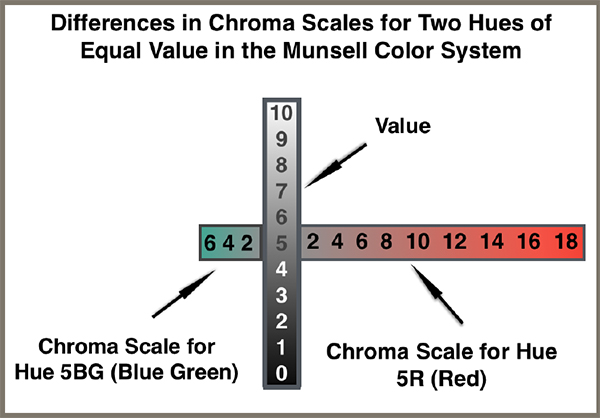 Thank you for the terrific question, Sincerely, Theresa-Marie Rhyne