CRM Archaeologist, Chris Webster, talks about using Munsell in the field for analysis.

I first heard of the Munsell Book of Colors when I was at field school in Tanzania.  The trip was organized by Earthwatch and we were digging two trenches in the famous Olduvai Gorge.  Olduvai is famous for fossil hominid remains that have been found there, most notably, by the Leakey family.We had finished our first trench and were setting up to draw the massive two meter tall profile of the back wall.  The trench was shaped like a right triangle with the base at the basalt layer that is the floor of the Gorge and the hypotenuse in line with the angle of repose of the slope we were digging into.  We were going to draw the one meter wide, two meter tall, back wall of the trench and the triangle-shaped side wall.

Most archaeologists draw profiles of excavations the same way.  Or, at least they all include the same elements into the drawing.  You start with the edges of the drawing.  You know your limits because you know the height and the width.  Once you have the scale figured out you draw in the ground surface and the floor.  Next, I usually will draw in any major features: the items I really want to be accurate.  For example there may be a massive tree root or boulder protruding from the wall.  These are easy to draw and I get them in right away.  If there are any actual features or artifacts, such the cross-section of a hearth or a pit, then I’ll draw them in too.  Finally, I draw in all the soil horizons.  Once the drawing is complete and the finishing touches have been placed on the map I finish by doing the same thing I’ve done for every profile I’ve ever drawn: I take Munsell readings for all the different layers of soil.

In Cultural Resource Management archaeology there is high turnover.  People travel around from place to place and work in many different areas of the country.  These areas all have their own unique soil types and weather conditions.  As a consequence, there are different schools of thought on how to “take a Munsell”.  Some people insist that soil should be analyzed dry while others insist on it being wet.  I think in reality, you should test the sample when it is “naturally wet”.  That is, test the fresh soil before it has time to dry out.  If you are working in the Mojave and are testing the top layer then there is little chance for moisture.  So be it.

The other point of contention is, “shade or no shade”.  Personally, I like to take the Munsell in sunlight.  I’m not the only one, either.  I’ve worked for many people that have told me to do just that.  However, others swear that Munsells should be taken in the shade.  I’m actually not sure which is proper.  The one thing that everyone usually agrees on is that Munsells should be consistent.  I’d go one step further and suggest that they should be done by one person on the job.  This ensures it’s done the same way, with the same pair of eyes, every time.  I’ll mention why that is important below.

So, when do archaeologists use Munsells?  Well, on the West coast we use them for excavation profiles as I’ve described above.  On one project I saw them used for defining the various colors in chert.  Across the rest of the country they are used in profile drawing but they are also used for quick profiles in shovel tests.  Anytime a color needs to be accurately identified, Munsells are used.

After a project is finished, Munsell colors help the archaeologists determine what the sub-surface soil profile across a landscape looks like.  On a project in North Carolina we shovel tested across over 2,000 acres in sand.  There were essentially two primary strats, three if you include the organic matter on the surface.  In most areas the artifacts were concentrated in one strat, a yellow-brown sandy layer.  We quickly knew that artifacts would likely not be found in the lower strats.  Furthermore, we knew that we could us GIS to graphically depict all the shovel tests and know where the artifact bearing strata were across the entire project area.  Having accurate depth and color data is essential to this process.  That is why it’s important that you agree upon a method for taking a Munsell before the project starts, or, that you have one person do it.

The use of the Munsell Book of Colors is probably the one constant that you can count on across the world in archaeology.  Everyone uses it, even if they don’t agree on how to use it!  Here in the United States we mostly use the 7.5YR, 10YR, and 2.5YR pages.  However, sometimes I’ve used the 5YR and the 5R pages.  Sometimes the Gleys come in handy too.  I know at least one person that only caries the 7.5YR and 10YR pages with him in his clipboard.

No matter how you do it or where you do it, the Munsell book will continue to be a vital part of a true archaeologist’s dig kit.  It sits right next to the whip and the pistol. 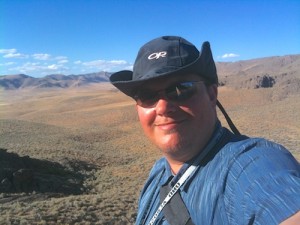 Chris has been a Cultural Resource Management archaeologist since receiving his B.A. In Anthropology from the University of North Dakota in 2005.  In 2010 Chris received his M.S. In Archaeological Resource Management from the University of Georgia in a highly accelerated one year program.  Since 2005 Chris has worked on projects in thirteen states and in just about every region in the continental United States.  Chris has worked as an archaeological field technician, a crew chief, and as a project manager.

Currently Chris is working on advancing the field of CRM archaeology with the use of technology and tablet computers like Apple’s iPad.  Tablet computing will allow archaeologists to digitize forms on the go in the field allowing for less time in the office spent on processing and more time spent on research and writing.

In addition to his field work and full time job in the Nevada’s portion of the Great Basin, Chris writes an archaeology-themed blog called Random Acts of Science and produces a CRM news podcast called CRM News Weekly.  Chris believes in teaching about archaeology to not just archaeologists but the public as well.  He believes that archaeology is for everyone to enjoy and understand.

One response to “#123 Munsell: An Archaeologists Perspective”