Our interview series celebrating 100 years of the National Park Service in the United States and the important role soil plays in these parks continues. We head to Hilo, Hawaii to talk about the soils of Hawai’i Volcanoes National Park with Amy Koch, Assistant Director for Soil Science with the Natural Resources Conservation Service, Pacific Islands Area.

Conversations with Soil Experts: An Interview with Amy Koch

Amy Saunders Koch is the Assistant Director for Soil Science with the Natural Resources Conservation Service (NRCS), Pacific Islands Area. She has worked with NRCS for over 12 years, with ten years in Hawaii. Amy earned her bachelor’s degree in Environmental Science from Virginia Tech and master’s degree in Soil Science from Utah State University. She currently oversees soil science and natural resource assessments for Hawaii, American Samoa, Guam, Commonwealth of the Northern Mariana Islands, Republic of Palau, Federated States of Micronesia, and the Marshall Islands.

What is Unique About the Soils of Hawai’i Volcanoes National Park?

In areas that do have soil, many of the soils are shallow to lava flows. Some soils are organic soils that form a thin layer of soil over young lava flows. Other soils are volcanic ash soils that have many layers, or horizons, that have been deposited over thousands of years during different eruption events. However, the most unique feature of Hawai’i Volcanoes National Park is the fact that the soils and landscape are changing each day as Kilauea volcano continuously erupts, its lava flows covering the landscape and creating new land that will one day support soils.

There's more to the island of Hawaii than beautiful beaches and green forests. Hawai'i Volcanoes National Park exposes a fascinating world of active volcanoes and rock formations. Whether you spend a day at the park, or plan on extending your stay to a few days, there are a variety of ecosystems to explore. From lush rainforests to dry desert soils and everything in between, this park provides a fascinating variety of rock, soil and lava flows to see first hand! 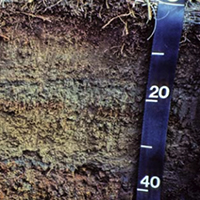 What Do the Soil Colors at Hawai’i Volcanoes National Park Tell Us?

The colors of the soils at Hawai’i Volcanoes National Park paint a picture of the history of the landscape in a particular location. Darker colors may indicate soils that are rich in organic matter, but many dark soils are lithochromic, having the color of the unaltered rock or cinders. Cinders and volcanic ash deposits vary in color based upon the chemical and mineral composition of the eruption event. Older volcanic ash deposits that have been exposed to warm, humid conditions may be redder in color due to the presence of iron and aluminum oxides that formed during soil weathering processes. Soil colors span the pages of the Munsell Soil Color Book, including multiple shades of brown, black, and gray as well as various hues of red, yellow, and green. Often a single soil will display a rainbow of colors throughout the soil profile, each horizon a representation of a particular geologic event in time.

Often a single soil will display a rainbow of colors throughout the soil profile, each horizon a representation of a particular geologic event in time.

How is the Approach to Soil Science and Management Changing in Hawai’i Volcanoes National Park?

One of the biggest issues land managers face in the park is addressing invasive plant and animal species that were introduced to Hawaii and have since spread out of control with harmful effects to the environment. Invasive plants can outcompete native plants, disrupting the natural ecosystem and suppressing the growth of native plants. By better understanding the relationship between soils and vegetation, land managers may be able to more effectively control invasive species.