It is a rematch some 13 years in the making, and one that will look almost identical to the first: the New England Patriots versus the Philadelphia Eagles. Since that Super Bowl, the Patriots have been back in the big game a bazillion several times, winning some and losing some, but this will mark the Eagles first Super Bowl (and only the second in their history) since 2005.

A Rematch in Blue, Green & White

For two teams with deep and rich uniform histories, the rematch of SB XXXIX will feature two teams whose uniforms have changed little since that game. The Patriots won that game, and did so wearing white jerseys and blue pants, with the Eagles in green jerseys and white pants. They will be wearing those colors this time around as well.

For the Patriots, it is actually an odd choice. Because the AFC is designated the “home” team, the Patriots were allowed to choose what color jersey to wear. They always wear blue at home. So why did they choose white? Well, aside from the fact that they beat the Eagles once wearing white jerseys, and the fact that they are undefeated in Super Bowls when wearing this version of their white jersey, they are taking recent history into account: the team wearing the white jersey has won 12 of the past 13 Super Bowls.

If we want to be technical, the official colors for the Patriots are Red, White, Nautical Blue and New Century Silver. The official colors of the Philadelphia Eagles are Black, Charcoal, Silver and Midnight Green.

The official colors for the Patriots are Red, White, Nautical Blue and New Century Silver. 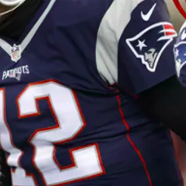 The official colors of the Philadelphia Eagles are Black, Charcoal, Silver and Midnight Green. 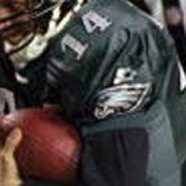 For their history, the Patriots have always been a red-white-and-blue team, which makes sense given their name, but it is only over the past two decades that they have become a predominately blue team. The Eagles have been wearing various shades of green and white for almost their entire history, but they did not start out that way. Let’s take a look at their uniform histories.

The Eagles are one of the oldest franchises in pro football, having first begun play in 1933. Back then, the team actually sported uniforms with the same colors as the flag of Philadelphia – powder blue and gold. In 1933, the jersey was light blue over tan pants, and in 1934, the team switched the colors – making the jersey predominately gold. In 1935, the team would first adopt green for a jersey color – and with the lone exception of 1941, when they would dabble with blue and black, the team has almost always gone with green, white and/or silver as their colors. They added black jerseys and pants in the 21st century, but for 70+ years, it was all green, all the time. 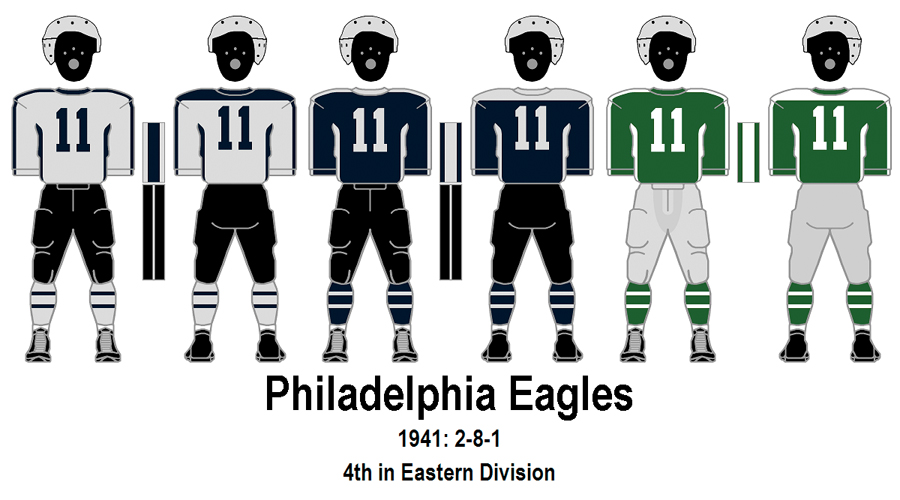 By 1942, the Eagles were back wearing green and white. In one of the odder occurrences (due to wartime shortages of all things) in 1943, the Eagles merged with the Pittsburgh Steelers, for one season only, becoming the “Steagles.” The combined team would wear green and white. No change from the previous season for the Eagles, but for the Steelers, it would be the ONLY year they ever wore green. The team would introduce their first white jersey in 1944, and it has remained in their repertoire since then. During this time, teams wore leather helmets, and the Eagles painted theirs white and green. They would have some success during this decade, winning NFL championships in 1948 and 1949.

By the 1950s, leather helmets gave way to plastic, and the Eagles would alternate between solid green helmets and silver/green models. The jerseys were always solid green in the 1950s, and the white jerseys were also very basic – but did include some striping on the arms. The next big change would come in 1954, when the team added wings to their helmets. In 1955, only three teams had added any kind of logos to their helmets. By this time, the modern uniform was evolving into one very similar to the one worn today.

By 1960, the Eagles would be very good once again, and they would win the 1960 NFL Championship that season. They would continue to wear their basic green and white combinations into the early 1960s. They would jazz things up considerably after this, adding northwestern stripes followed by shoulder loops and sleeve stripes as the decade drew to a close. After a brief return to plain jerseys, the team would again add sleeve and shoulder stripes, and the white pants became silver in the early 1970s. They would keep this look throughout the decade, and made their first appearance in the Super Bowl (XV) in 1981, which they would lose to the Raiders. 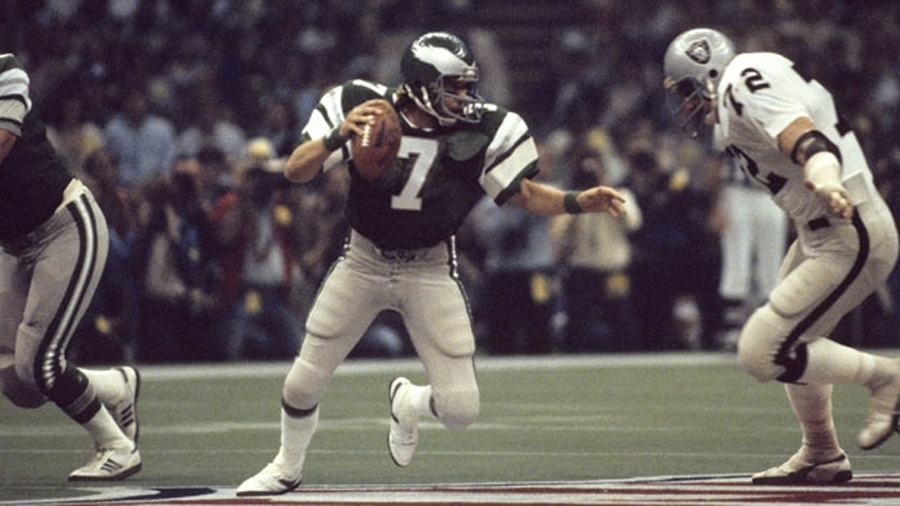 The Philadelphia Eagles uniform colors in the 1981 Super Bowl. Photo Courtesy of IMASPORTSPHILE

By 1985, the Eagles would once again have basic, plain jerseys. The green would go from dark (almost hunter) to an almost kelly green, and they added black to the uniform in the form of number outlines. They would keep this color scheme throughout the remainder of the 1980s and into the early 1990s. In 1994, the NFL celebrated its 75th anniversary, and many teams, including the Eagles, wore throwback uniforms.

In 1996, the Eagles would make one more uniform change – and that change has basically lasted until today. They dropped the kelly green shade and moved to what is called midnight green. For a team that had switched styles (and sometimes shades) over the years, it is actually pretty amazing the team has stuck with this same basic design template for some 22 seasons. Since 1996, there have been very few changes, although they have changed the wordmark and added both black jerseys and black pants to the mix. They wore two “throwback” uniforms during this period: in 2007, they attempted to replicate their 1934 uniform, and in 2010, they recreated their 1960 uniforms (celebrating 50 years since their final NFL championship).

For Super Bowl LII, the Eagles will again wear green. Basically, the same outfit they wore against the Patriots the last time they faced each other in the Super Bowl. Clearly they’re hoping the results will be different this time around.

While not nearly as “old” as the Eagles, the Patriots were one of the original members of the AFL, which began play in 1960. Back then, the team was known as the Boston Patriots, and for their inaugural season, the team wore red or white jerseys over white pants, and a helmet that featured a tri-corn hat for a logo. They would ditch that logo in 1961, changing the logo to the beloved “Pat Patriot.” They would wear this logo on their helmets through 1992. In the ensuing years, the Patriots wore several variations of red jersey/white pants, white jersey/white pants, and white jersey/red pants. But the helmet logo stayed the same.

Their jersey would go through varying types of striping patterns over the years, as would the pants. During the early years, the Pats never seemed to have consistent uniform patterns, but the colors always stayed the same. The team eventually added red pants, which they would wear with the white jerseys beginning in 1979. They would drop the red pants in 1981, but they would return again in 1984.

It should be noted that while the Patriots may have had many uniform iterations in their first 25 seasons, the team was never terribly successful in the red/white. The would actually make their first Super Bowl appearance in Super Bowl XX (in 1986) wearing their red jerseys over white pants, and were trounced by the Chicago Bears. They would return to the Super Bowl many times since then, but never wearing the original red/white combinations. As beautiful as they were, unfortunately, both the team and the fans equated them with losing.

1992 would mark the final season for this color/uniform scheme. In 1993 (and through 1999), the Patriots would go through a second “progression” of uniforms, beginning with a new royal blue jersey and introducing the current silver helmet (the logo affectionately known as “Flying Elvis”). Their pants would be silver/gray for both home and road uniforms. Between 1992 and 1999, several changes took place to the jerseys, eventually culminating in a sublimated striping pattern and italicized, drop-shadowed numbers. The Pats would see some success in this iteration of uniforms, eventually reaching Super Bowl XXXI, but falling to the Packers.

By 2000, the uniforms would undergo another fairly major change, and they would morph into basically what the team is wearing today. The helmet which was overhauled in 1993 remained, but the royal blue jersey became navy, and the formerly gray/silver road pants became navy. Flying Elvis and the silver helmet did not change, but gone were the “90s” sublimations and drop shadows.

If one can argue that a uniform change brings success, then the Patriots are certainly Exhibit A in this category. Shortly after making the switch, the Patriots would return to the Super Bowl. They would win their first in 2002, defeating the Rams. They’d win their second one two years later, defeating the Carolina Panthers. Both of those victories came wearing their blue “home” jerseys. They would be the designated “road” team one year later, but no matter, in 2005 they would win their third Super Bowl in four years defeating – you guessed it – the Philadelphia Eagles and setting up the rematch we’ll see on February 4th. 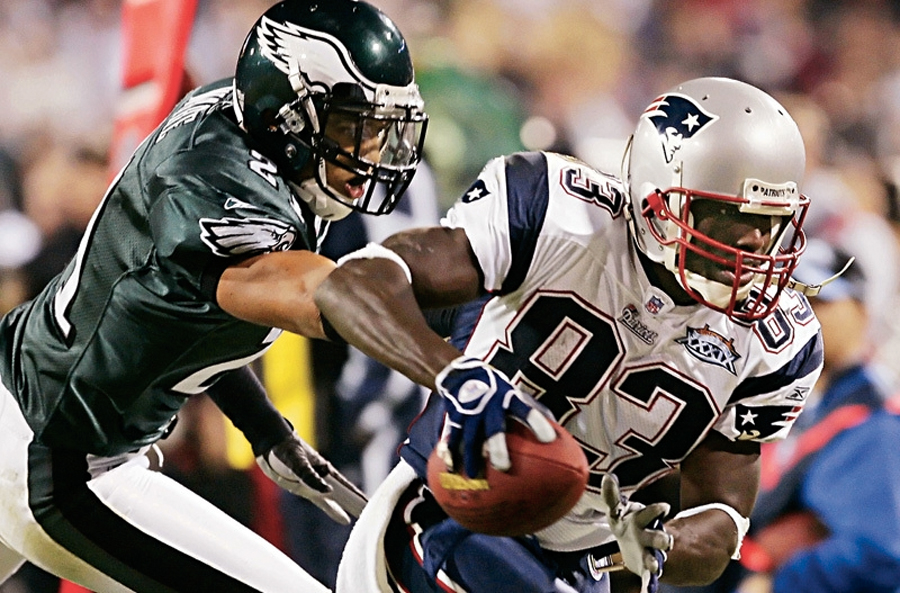 The New England Patriots vs Philadelphia Eagles in the 2005 Super Bowl. Photo Courtesy of Pinterest.

But the Pats weren’t done reaching the Super Bowl. They would return in 2008, wearing blue jerseys again, but losing a close one to the New York Giants. As fate would have it, the Pats got a chance at revenge against the Giants again in 2012, but dropped another squeaker. That would be the last Super Bowl the Patriots would lose – but it wouldn’t be the last one in which they played. They returned to the big game again in 2015, this time defeating the Seattle Seahawks (wearing white “road” jerseys) and once again last year (in white again), defeating the Atlanta Falcons in a thrilling overtime game.

To sum – since adopting their current iteration of uniform, the Patriots have won 5 Super Bowls (two in blue tops, three in white) and lost two (both in blue tops). Whether it is mojo, superstition, or comfort, it’s no surprise New England has again chosen to wear White. They’ve never lost a Super Bowl wearing it (in the current uniform iteration), and they defeated the Eagles 13 years ago wearing it. They’re certainly hoping history repeats itself again.